Watch the Donut Not the Hole 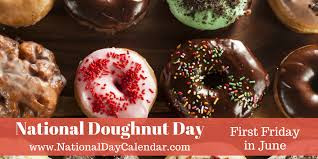 Wow, that lyric could really make a great quote for a post although I think I've ran into more trouble in life when I wasn't paying attention to the hole!

But anyway today's post is not about that type of hole it's about....

Yep, there really is a National Donut Day.  Actually it was created in 1938 by the Salvation Army in celebration of the women who served donuts to the doughboys who fought World War I.  While doughnut-like pastries are served all over the world, for the most part, donuts are a rare American contribution to the culinary lexicon.  If you doubt that donuts are American you are wrong because donuts are fried and anything fried, and/or with bacon, must be American.

I love donuts!  My favorite is a glazed cake blueberry donut. 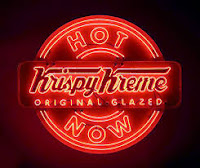 In America donuts can really define you.  Nationally, there are two giants in the donut business Dunkin' Donuts (based in Boston, MA and holding a 60% "lion's share of the retail donut business) and Krispy Kreme (a more regional brand originally from Winston-Salem, NC and holding about a 5% market share).  Donuts create quite the paradox for me because I love donuts but I also REALLY like coffee.  As for donuts, us Southerners would say there is no competition - Krispy Kreme wins any day of the week!  If you ever pass by a Krispy Kreme and the "Hot Donuts" sign is lit - STOP.  Those warm donuts literally melt into your mouth.  Dunkin' Donuts are OK, but in my humble opinion mediocre. However, Dunkin Donuts stays strong because they have the best coffee in the US, even beating McDonalds and rival Starbucks on most Amerian palates.  Actually, to me Sheetz has better coffee, but that's a regional brand here in the Mid-Atlantic.  Dunkin Donuts also has the best Sweet Tea which is against the laws of God and nature that Yankees make better sweet tea than Southerners.  It's even better than Chick-fil-A and McAllister's, I say with a heavy heart.

Btw, just in case you were trying to make a case for Tim Horton's - screw you and go back to Canada!

Of course donuts are even better when purchased locally.  I could tell you my two all time favorite donut places but, in a sentence, it would tell you where I grew up and where I live now.  Donuts can identify you that way.  I will give you a hint though, my favorite all time donut is made by this little Amish bakery I know of - damn they are awesome. 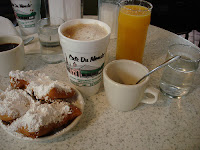 There are those derivatives of donuts.  Beignets for example are a type of donut hole topped with powdered sugar and popular in New Orleans.  The best place to try those for the first time is at the Cafe du Monde just off Jackson Square.  And the coffee there?  Bleck!  Chickory?  That's like a tree root, not beans you know.  But the donuts (beignets) and the atmosphere are great.

Anyway, here is a fun donut song.  If you need more info on donuts here is an actual "Donut Blog," proving you can blog about anyting including blogging about donuts and not sex.


Happy Donuts!
Have a Hole of a Day!