Who's Got the Touch to Calm the Storm Inside?

"Accept everything about yourself - I mean everything.  You are you and that is the beginning and the end - no apologies, no regrets."

My girls are both teens now, one actually driving.  It's fun to hear their laments about boys; why they do things, why they don't.  I usually give them my slightly eccentric and anachronistic responses such as "you know Kissinger once said of the Russians 'never assume there is any intentionality in what they do.'"  I always go on to add some other quotes like:

They then smirk, roll their eyes, and go back to texting; never quite getting my symbolism.  But, however, I guess the main point I get across is that I'm exhibiting that main male characteristic of being egocentric about making sure I get my point across that means something to me but nobody else.  Lesson learned!  :) 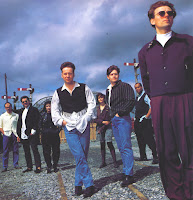 I should love Simple Minds, they are from Scotland after all.  And they wrote the soundtrack to, like, every John Hughes movie that formed the backdrop of all us Gen-X'ers high school experience.  They really are a very elegant and archetypal 80's band with the soulful lead singer, a steady bass line, and catchy symphonic bridges that form delightfully listenable songs.  They were more musically adept than many of their 80's Brit peers and they created serenity with their balance of the traditional guitar/bass driven soul framed, not dominated, by 80's synth.  I always enjoy crisp percussion and they provide that as well.  They always give me contentment when Richard Blade plays one of their songs on First Wave and I'm taken back to a gentler more peaceful time.

So why, if Simple Minds is so damn good, I listen to them but I don't roll down the windows and scream the lyrics and play my steering wheel drum set to the song like I do with "Come on Eileen" or the Clash's "Train in Vain" or even Bob Seger's "Beautiful Loser?"

I just don't know, it's one of those enigma's or paradoxes, kind of like what makes a guy like a girl.  Well, more like what makes a guy REALLY want to *uck a girl.  Yeah that's it!  Figuratively Simple Minds are like that girl who is really cool and chill to hang with but, let's face it, you just don't want to *uck her.  "Come on Eileen" ain't gonna win no Grammy's but damn, if that song was a girl you sure would want to nail her at least once!  Am I right?  Yeah, you know I am.

Oh Allie.  She's a girl I knew in college.  She's a Facebook friend as well.  You know those Facebook friends who post all the time about going to Wal Mart and making a big fuss about their special day at Six Flags over Indianapolis?  The one's you laugh at because they need to get a life!  Allie is not one of those people.  She posts all the time and all the time she is doing totally COOL crap.  And I'm not someone who is easily impressed.  She's a writer, a musician, she does Celtic dancing, she yoddles with Tibetan monks, has box seats at Nationals games, yada, yada.  I lied about the yoddling, she doesn't actually do that with Tibetan monks but she probably does with somebody.  She's that cool.

In college she was way cool.

So right now you are probably expecting me to tell you about some epic adventure where we had passionate sex all weekend along the dunes of the Outer Banks of North Carolina.  Or maybe this is a sad story of unrequited love where Allie was always just beyond the grasp of poor Ryan.

You would think wouldn't you?  But no, Ryan is as finicky with women as he is with music.  There is nothing wrong with Allie.  As I said she is/was uber cool.  She could drink with the guys, was always cheering loudly at Big State U games, liked cool music.  She is/was cute too, diminutive and petite but while somewhat demur in private, she projected an inner strength and confidence.  Outwardly she looked delicate but you kind of knew she could kick your ass if she had too.  But she was sweet, not threatening and always had a sincere truly happy smile.  When you talked to her she really listened and focused and made you feel like she thought whatever you were talking about was as fantastic to her as it was to you.  Guys like that you know.  Oh, and she was pretty hot too with great legs and a rather shapely toned behind.

I always had a feeling she was interested in me.  Many times at a party or a bar among our frat friends I would contentiously make myself realize she did look very interested, was flashing those typical interested signs, and was entirely available.  I would debate with myself why I should go for it, do more than flirt.  A few times into the late hours of a Big State U Saturday night, or maybe even early Sunday morning hours of a Big State U weekend the party crowd would diminish.  Only a few remained in the house, she and I might be two of the few.  This might be the opportunity.  Perhaps score, or maybe just do something that would lead to something later.  I could never bring myself to pull the trigger.  I don't know why.  But who knows what lerks in the minds of a guy.

Allie was cute, but maybe the lines of her cheek and jaw bones seemed a bit masculine.  Maybe her kinked up 80's hair didn't seem like something I craved running my hands through as I lay on top of her.  Maybe in looking into her green eyes I saw my cousin looking back at me?  Maybe she was too available and I craved the process of pursuit and conquest.  Maybe there is just a fine line between cute and sexy?

I wish I knew.  I wonder if she wondered what was going on in my mind like my girls wonder what goes on in their guy friends minds.  I'm glad she couldn't read my mind because there really was never any intentionality in it.  Which goes back to my original point.

"There cannot be a crisis next week.  My schedule is already full!"

Oh wait, that is another Kissenger quote, I forgot what my main point was but that is typical of me and of guys.

I was on the 70's channel last night and thought I should use this song but I just wasn't feeling it.  I guess I was Not in Love with using Not in Love to write about not being in love.  You just don't know what goes through a guys mind!


Posted by Ryan Beaumont at 8:55 AM No comments: