Who's to Say I Can't Do Everything

Two years ago I wrote my December cookie post and used it as a way to announce my retirement at 500 posts (at the low price of 499 posts).

Then, a year later I wrote my actual 500th post and re-announced my retirement with the thought that this was it, knowing (of course) one never says never.

Since I wrote a post two years ago, just prior to my first announcement of my retirement, about my first daughter's college selection process; I feel it incumbent to pause my retirement and talk a little about daughter #2's college selection process which, of course, will likely sharply delay my actual (real life) retirement and drives me to want to un-retire from blogging in order to vent!

Maybe I should take a quick pause from this retirement pause and extend the one streak I still have going, my word of the year post.  This year, 2020, as we know has been a real *itch.  As such we really don't have a fun word to spoof.  The pandemic has not given us much fun (and certainly made Ashley Madison Adventures pretty difficult) and of course "pandemic" being the word of the year means there's not much fun in writing about the word of the year.  Anyway, the pandemic really affected us and that's about all I have to say.  Btw, my personal favorite word this year was asynchronous, as in Ryan's posts are usually pretty asynchronous!

Anyway, because of that word of the year, college has been a real wild ride for daughter #1.  She was accepted at her Dream U and we moved her in 1.5 years ago to that sunny happy place.  As I told many friends when asked "how's she doing," I would say if she was having more fun it would be against the law.  She also did well academically, which is sort of important you know!  Her year was cut short from the COVID thing but that was OK.  We enjoyed her being home in April (a month early).  She did move back over the summer, working in paradise but learning that real life is a bitch, and college is great (and better when mom and dad are paying for room and board).  She had a pretty good fall and is now back home for the holidays but looking forward to getting back to the sun.

So let's talk about daughter #2 and her adventures!  And let's look at some new quirky college vernacular:

Merit vs Need Based Aid

Daughter #2 is not, as we might say, a passionate individual.  I think the Gen Z term would be "chill."  Because of that she has never had that #DreamU place in her mind.  Which started out as good because I thought that meant I could talk her into going to Ryan's old Big State U and give me an excuse to go back for football weekends.  BSU would actually be a great place for her as they have just the smelly animal science majors she wants!  In fact, she could make a big impact with one particular unique sport she has been playing since she was 8.  Very few schools play this sport but Big State U is one and while they have a team they are not great.  Which is great for Daughter #2 as she is probably better than the girls who are currently playing.  But BSU is big and she is an introvert so maybe not the best.  And, omg, she might meet a degenerate like me there, so maybe I should talk her into somewhere else!

So daughter #2 is pretty fantastic at sports.  Not great at a particular sport but solidly good at pretty much any sport.  That means the big schools (D1) are not too interested (and being vertically challenged doesn't help either).  But I kind of thought smaller schools (Division 3/D3) might let her play.  So we spent a year talking about it and her ignoring me.  Finally we got some video together and lo and behold a couple of coaches bit.  You see, small college (D3) sports is pretty interesting from a recruiting standpoint.  There are no athletic scholarships but schools still want to win.  So D3 schools are looking for kids that can compete athletically and academically AND get the merit scholarship $'s needed to attract them because most of the D3 schools are small privates with high $ tuition.  And so entered fancy private equestrian school for rich Yankees!  This school is perfect!  Daughter #2 can study big animals every day at their barn and fields AND they SUCK at the two sports she is great at!  Video sent and Bingo, both coaches were interested and all of a sudden Daughter #2 understands that old Dad Ryan may not be completely stupid.  She loves the attention and now wants to play sports in college and understands that maybe it will be helpful if a coach is making sure she studies!  And, oh btw, we have some family connections here and its not too far from BSU, so maybe Ryan gets his football weekends anyway along with watching Daughter #2 play!

But the interest doesn't stop there.  We send video to another school that sucks at sports.  Bingo, another coach is interested!  Maybe she wants quirkly-cool aquatic Chesapeake bay liberal arts college?  In fact this school is even MORE interested.  We actually visited for an Open House two years ago, because Dad Ryan knows what he's talking about but Daughter #2 was bored and said it was too remote.  But now that two coaches are telling her she could play and help them build a program, this place is pretty amazing!  Wow, maybe I just need to work on my college sales pitch.Then she gets accepted to the three Florida sunshine colleges she originally said she was interested in to be closer to Daughter #1.  And wow, the scholarship $'s are pretty good.  But they are D2 schools, not big time but interested enough in winning to offer scholarships.  At those schools, short may not work for sport #1 and these fancy schools are recruiting Martina Navratilova's for their country club sports, so athletics may not be an option here.  Which of course was not important a year ago but now it is so these may be off the list.  Ryan is not too disappointed except it removes an excuse to go to Florida.
Oh, btw, did I mention that a year ago I made some calls and got Daughter #2 an opportunity to practice with Big State U's unique equestrian sport that she is good at and they are not?  Yeah, if she can get in, she can do that.  Seems like attention is only bad when Dad Ryan does it.

So while its nice to be wanted, now we have to decide who to play for and what to study.  Actually all are a fine academic fit and pretty good schools, so at this point I guess I just need to let her do her thing and maybe, just maybe, she can do everything!

But folks, get those kids practicing at dancing, violin, hockey, or even video games (yep, you wouldn't believe it but colleges have video game teams now) there are scholarship $'s out there to be had and not everybody has to go broke to pay for a degree if you have some skills to sell!

But damn, I just wish I could have one child who could give me an excuse to go back and party at Big State U again!

Who's to say what's impossible and can't be found

I don't want this feeling to go away

Is this how it's supposed to be

Is this how it's supposed to be

I have to admit this song makes me cry.  It's hard to believe I took my (then) 3 and 5 year old daughters this movie and now, 14 years later, they are off and doing their own great things!

Good People All, this Christmas Time

It's hard to believe it's been a year since I've put together a blog post.  I sort of stepped out of the way last year at this time ending at my 499th post.  It probably would be cooler for me to sit on 499 and shun the limelight of some perceived important plateau like 500 posts.  But Jz's cookie post calls to me so I'm going to blame her on my vanity.  It seems in vogue with the times.

Btw, times......, I always like to talk about the word of the year at this time each year.

Yesh, I just need some hot chocolate and a good Hallmark Christmas movie.
Oh, speaking of Hot Chocolate, that's my cookie this year.  Yeah, I know; hot chocolate is not a cookie but neither were the sausage balls or cranberry bread I submitted in year's prior.  You see I'm always in an "existential" crisis over following rules and since we are in a "climate emergency" and we don't have much more time to drink hot chocolate I think its best I find my "voice" and give you a great recipe.

This recipe comes from one of my favorite out of the way BBQ joints, the Hickory House in Jane Lew, WV.  Well if you are familiar with Jane Lew you would probably says its really closer to Weston but who am I kidding have any of you really taken the Jane Lew exit off of Rt 79 between Fairmont and Charleston?  Though if you haven't, you should!  But probably around Halloween.  The hot chocolate will still be good and you can go to the Trans-Allegheny Lunatic Asylum about 5 miles down the road which really is in Weston, WV.   It will definitely scare you into an "existential" "(environmental) emergency" or at the very least you will find your "voice" with a loud scream!  :)

So anyway here is my (not so) cookie recipe!

Thanks for doing this Jz, you are existentially cool; even if you did temp me into this 500th post.  Shame on you!

Psst...., Jz I'm really not mad at you.  I'm too southern to speak ill of someone in public, but I know you kind of like that kind of stuff.

Directions:
*     Warm milk and heavy cream in Crockpot on medium
*     Once milk and cream warm stir in condensed milk, making sure it combines evenly
*     Continue to warm, do not allow milk to boil
*     Once mixture warm, slowly stir in chocolate chips in small portions until chips melted into liquid
*     Add Vanilly Extract, continue to stir to insure smoothly blended liquid

I did make this for a party last week and it is "existentially" rich and tasty!


Happy Holidays to Everyone! 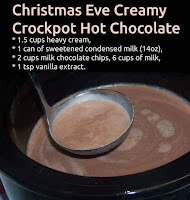