Omg, almost a month has gone and I've not written a post.  I've had lots of thoughts and I always think I want to post but then I just don't have any time.  In these moments it's best to go with food!

So here is a food post for when you don't have any time to blog or to really cook or do anything but work and take the kids to soccer practice. 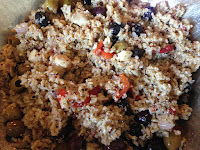 You see we've had some pot-luck events of late and I don't have any time to do those either.  So when I'm in this situation I do two things:  1)  I procrastinate on blogging, 2)  I do this simple yummy and mostly healthy recipe. 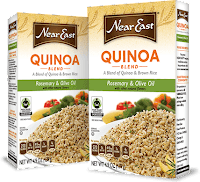 *     2 or 3 boxes of Near East Quinoa Blend, I prefer the Rosemary and Olive Oil because Rosemary is my favorite herb and a Rosemary once gave me a great blow job!  But trust me, while there are oils in the recipe there are no body fluids involved (unless by choice).
*     Now remember you are at Wegman's (not some crappy place like Food Lion, Publix, or Piggly Wiggly if you are in other parts of the county).  You can substitute UCrops or Whole Foods for Wegman's if necessary.
*     Now that you are at Wegman's, go to the Tapas bar and get about 0.5 lbs of some type of Mixed Olive and Feta Cheese (antipasto) mixture, some Roasted Red Peppers, and a Green Pepper or maybe some Red Bruschetta.  Btw, that's a mixture of tomatoes, olive oil, and onions not a song by Rush!
*     Go home and follow the directions on the box of Near East Quinoa Blend.  I believe it's 1.75 cups of water and 1 TBS of olive oil.  Bring the water to boil, add the Quinoa and spice mixture, and then the olive oil.
*     Once the Quinoa is soft remove from heat.  If you chose a green pepper or maybe some mixed squash, go ahead and chop that up and add it to the Quinoa now.  The heat from the Quinoa will effectively blanch the veggies while leaving them with a little crunch.
*     Let the Quinoa cool a little on the counter-top.  Btw, you always want to cool things to under 40 degree within 4 hours of the temp dropping below 140 degrees, but you should allow them to cool a little on the counter-top so you don't put undue stress on your refrigerator coils.  I said that just so I could sound handy-dandy.  I really don't know what I'm talking about.
*     Cool the Quinoa in the refrigerator.  A few hours later take the Quinoa out of the refrigerator and fluff with a fork.  Add the olive antipasto mixture, the roaster red pepper and/or the red bruschetta and mix completely.  Put back in the refrigerator.
*     Serve the next day!  It's better when those peppers and olives have had time to infuse the Quinoa.
*     Next day at the pot luck accept unapologetic all compliments for all your hard work and keen sense of food style.  You know all the cool celebs like Gwyneth and J Law eat lots of Quinoa.

You know Quinoa is a very healthy food.  As wiki says (because, remember, I don't have a whole lot of time for this), "quinoa is a rich source of protein, dietary fiber, several B vitamins, and dietary minerals."  But more importantly your friends will think you are hipster chic and uber food forward.

OK, that's all for now.  I gotta go to the gym a get a Kale Protein shake (jk, I can't stand Kale).  I'll try to get some thoughts and reflections out later this week and I got a whole lot of thoughts on this here American election.  Mr. Trump is so rich for humorous analysis.

"When you get so down that you can't get up
and you want so much but you're all out of luck
When you're so downhearted and misunderstood
Just over and over and over you could.