"Sail on by.  Your time has come to shine all your dreams are on their way.  See how they shine.  Oh, if you need a friend I'm sailing right behind."

Bridge Over Troubled Water was released in January, 1970 and became, perhaps, Simon & Garfunkel's most consequential song.  If imitation is the greatest form of flattery then the song is substantial in that it was later covered by Aretha Franklin and Elvis Presley (who both offer a more gospel perspective on the song).  The song is beautifully written, beautifully sung, and beautifully produced, being influenced by and pulling from elements of the Phil Specter Wall of Sound Wrecking Crew.  The soft piano at the entrance and through the first two verses that ultimately bleeds into the dramatic orchestral bridge give peace, joy, or solace to whichever mood the listener is in.  That bridge leads to one of the more apparently introspective third verses in popular music and one of the more pressing questions, "who is Silver Girl?" 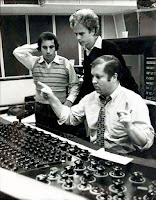 Originally Paul Simon intended the song to be two verses.  Simon's producer convinced him he needed a third verse to support that big histrionic sound at the end.  Simon then quickly penned a third verse in the studio somewhat on the fly.  Apparently the Silver Girl reference was a simple mischievous jibe at Simon's then wife, Peggy Harper.  Harper had been recently perplexed by premature grey hairs.  Simon had playfully created the nickname "Silver Girl" for her.  That third verse became his simple hope for her happiness.  And thus a simple, off the cuff, playful reference ends up being the frame to a more meaningful purpose.

That song was a central focus of an award ceremony I recently attended at my daughter's school.  The recipient of the school's annual alumni service award cited that song as a passage that had given their family solace in times of personal crisis.  She was quite eloquent in describing her love of the school and how the school and the familial relationships she had developed with faculty, alumni, students, and other parents had truly been a Bridge of Over Troubled Water many times in her life and thus the song was emblematic of those feelings of connection.

As I listened her wonderful speech I reflected on my life.  As I often do I reflected on choices I have made and what they represent to me.  And of course how I could make meaning of them on this blog.

Recently a freelance writer contacted me and I did a brief interview for a piece she may write on Ashley Madison.  I'm not sure if she will use any of my feedback.  She asked the typical questions:  does your wife know? what would she think if she found out?  why did I first go onto the website?  what attracted me?  what still attracts me?  I'm not sure I gave her good answers but it did give me pause for reflection.

Over the past fourteen years a wonderful historic river has been ubiquitous in the background of my life.  I see it from my office.  I run across it and along it on afternoon runs.  I hike along its banks on the weekend.  I've kayaked along it many times with my wonderful friend Sandee on lazy sunny spring afternoons.  Running along the river is the C&O canal a 180 mile trail from Cumberland, MD to Georgetown in DC.  The C&O is a serene bypass or perhaps a frontage road to the river just slightly to the north and below those highway bridges above the river. There are many historic and beautiful bridges that ford the river for travelers.  While the river is mostly tranquil, rarely troubled, those bridges take travelers past the river and onward to where they are destined.  And for those not so much in a hurry and in need of a detour, the canal is truly a calming third place escape from those troubled waters of life or towards one's "dreams along the way."

Life does have many troubled waters and, as with that eloquent speaker I so enjoyed Saturday night, the communities we make help us ford those waters.  In my life my daughters are my bridge, my work is my bridge, the school community I have come to love and enjoy serving are my bridge.  I take pride in knowing I matter in my community, that people consider what I have to say relevant.  I enjoy working in my yard and seeing balance and beauty along the flower beds rimming our house.  I love that so many birds and sometimes woodland critters find food and shelter in and around our deck and porch.  The fact that our family "matters" is a bridge over troubled water for me.

Ashley Madison has been an aspect of my life for several years now.  For some it may be a bridge over troubled water or simply a bridge away from a troubled life.  For me it was a silly chance encounter and one I did not anticipate.  It was proverbially an off the cuff off ramp from an, at the time, tumultuous life.  It has been a third place, a third verse, a detour, and a canal running along side yet never really crossing the river of my life.  It is not a Bridge Over Troubled Water, much more valuable things are that for me.  But the people I've met on AM and on the blogosphere have been a sunny day along the river, a pleasant detour, a convenient frontage road that has allowed me to drift off the highway for a few moments.

I hope I have been that for others.

"Like a bridge over troubled water, I will ease your mind...."

Ah Ryan. you're so cute when you get all deep and philosophical! Got me thinking about that song and the metaphor, and whether I have a bridge... or a boat that carries me along the river and lets me stop in at safe harbors now and then? Hmmm....