Hey, does anyone know if Downtown Abbey is on tonight?  I like it a lot.  My wife loves it!  Which brings me to a moral dilemma!  What happens if the Super Bowl runs past 9 pm which I'm sure it will?

That dilemma formed a joke in my head based on an old Jeff Foxworthy schtick:

"If you are a guy and decide to watch Downtown Abbey over the 4th quarter of the Super Bowl you either gay or married!"

Or in desperate need of a second TV.  Yes the Beaumont family (normally proudly so) only has one TV set in the home.

I've have been thinking long and hard on this post all week.  After all, Super Bowl foods are my longest running standing blog post theme going way back to 2011.  Look at the bottom for links to all my past Super Bowl food posts.

When I did start to think of the game between the Patriots and the Seahawks it sort of reminded me of those "old school" Super Bowls between Dallas and Pittsburgh way back when; two epic dynasties clashing at the apex of their greatness on the biggest world stage.  I mean this is big, kind of like Jennifer Anniston competing with Angelina Jolie in a Brad Pitt *ucking match, Nicki Minaj vs. Brazil's Miss Bum Bum in a big ass contest, or Russia vs. the Ukraine clashing over world wide web hegemony for internet brides! 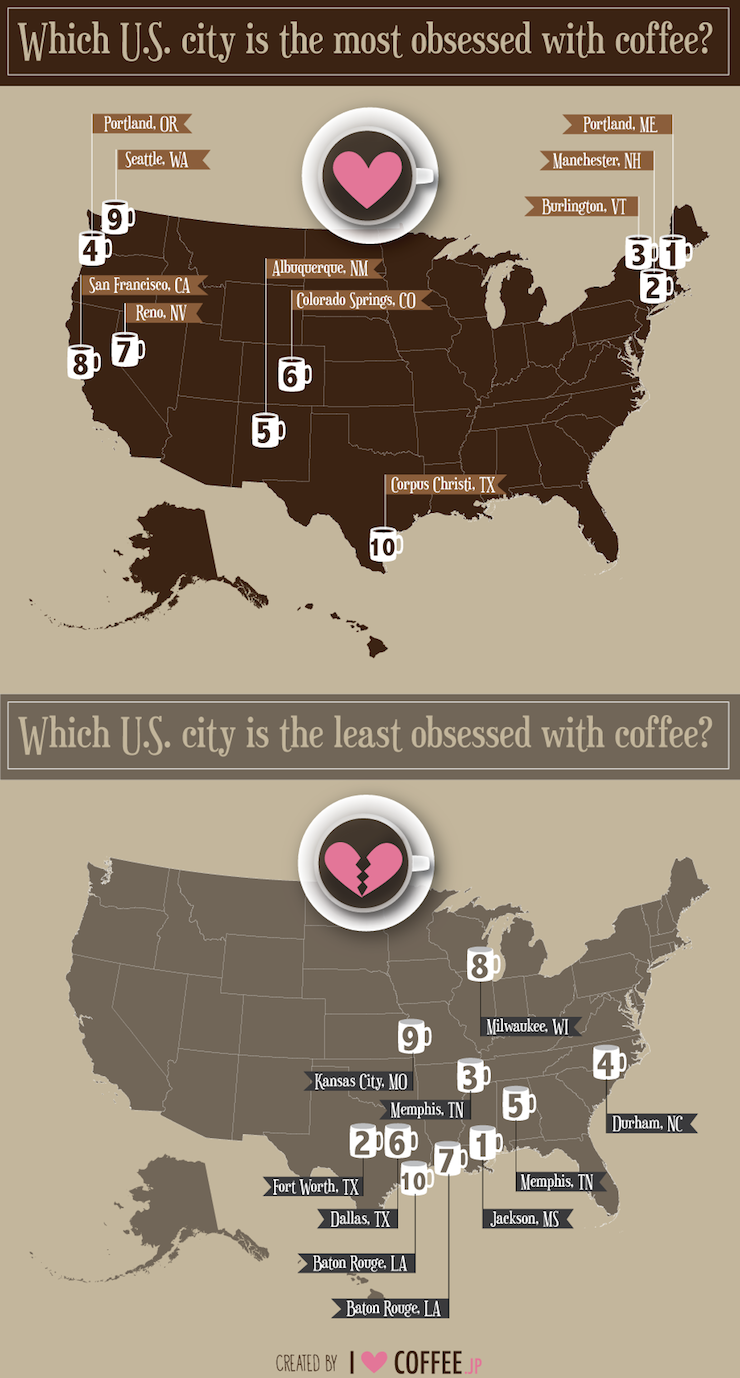 And when you think about the competition between Seattle and Boston you think one thing - rock bands and coffee!  Well maybe that's two things and I guess I didn't include football either.  I do think Seattle has Boston schooled on rock anyway though (sorry Stadium Rock fans of Boston - you're way overplayed).  But actually when it comes to coffee New England just does outdistance the Pacific Northwest in coffee consumption but it is an epic clash!

But it goes even deeper than that with respect to coffee.  Seattle and Boston are not just a clash of passionate coffee aficionados they are, in fact, a clash of culture and style.  But who comes out on top?

In one corner of the ring we have Seattle, the brazen newcomer to the coffee world order.  This is the team that reinvented coffee and made the $4 cup part of our lives and taught us that small, medium, and large should really be tall, venti, and grande.  Yes Starbucks, founded in 1971 as a coffee roaster and then translated into an Italian-styled espresso cafe is bold, brash, and over-roasted.  With over 20,000 stores world-wide Starbucks is the largest coffee retailer in the world.  By putting a store on every other urban corner, like the Seahawks Starbucks will run your ass over and make you wonder how you got through two flights, three meetings, and four conference calls on one Grande Pike Place roast!

Yes, the over roasting of the coffee doesn't taste quite right.  You can't figure out wtf the logo is all about, "are those mermaid tits I'm looking at?" "No, that ain't a mermaid" you say, "it's a Siren?"   Wtf is a Siren and who names their business after the first mate on the Pequod?  You mean I have to read a classic novel about a whale to get this?  Too difficult.

And speaking of those Seahawks, who ever said dark blue, grey, and techo-puke green look good together.  But I tell you what those Seattle teams are so damn efficient it doesn't really matter how shitty the coffee tastes or how ugly the uniforms look; they will get you jacked up on a caffeine or a weak side blitz so quick your head will spin and you'll gladly plop down your $5 bill and get on with your life because they have RYanne's half caf/half chi soy macchiato down in 15 seconds (you do realize Starbucks baristas misspell your name on purpose).   Seattle also gives you multiple looks on defense and even more multipler blends of coffee!  Pike Place, House, Veranda, Yukon, French, Sumatran.... Omg, I just wanted coffee; I don't care if it's single origin or has notes of floral and herbs!  Well you better think quick and decide the line's moving as fast as a Richard Sherman pick-6, so out with it.  Wow, I think Seattle may move too fast for a slow witted guy like me.

In the other corner of the ring we have traditionalist Boston and it's beloved Dunkin Donuts.  Sure it sounds like they have nothing to do with coffee but in fact over 60% of Dunkin's annual sales come in the form of hot beverages and any New Englander loves that smooth medium roast of South American blends.  Yes Dunkin does in fact use Central and South American beans and gives them that medium roast that brings those beans to just the right slow and easy symphonic caramelization!  It is in fact that Medium Central/South American blend that most Americans grew up with at McDonalds and your average diner that served S&D coffee.  So that is why we probably feel so comfortable with their coffee and the Patriots in the Super Bowl every other year. 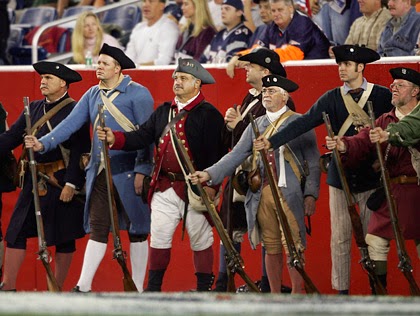 No, Dunkin' wasn't founded by Sam Adams and Paul Revere but starting in 1950 in Quincy, Mass it is rather colonial compared to it's Western rival.  And much like those football Patriots Dunkin is smooth and orderly.  No crazy mixtures here just one blend; a series of smooth Tom Brady short passes to Gronk and Amendola, meticulously progressing down the field in an orderly New England democratic fashion ready to meet the day.  If Seattle is bold and brassy, New England is elegant and refined in it's traditional austerity.


At just over 10,000 stores world-wide Dunkin is not quite as deep as Starbucks but they are very efficient.  I love the fact they put the cream and equal in the cup for you but don't misspell your name on the cup, try to sell you a kookie CD of Euro jazz, or try to confuse you with all those drinks that sound fantastic but are just various versions of coffee shots and steamed milk.

OK, so there you go, my football analysis of the two best coffee towns in the country.  How will that play out on the field.  I say Boston's smooth blend produces yards and first downs but Seattle's strong roasts keep the ball in front of them and keep the score down.  That ass kicking over-roasted running game of Marshawn Lynch will inevitably wear down the Pats.  I say Starbucks Seattle wins in a lower scoring game about 24-20.  I say the Pats score on one trick Coolata play and get a penalty for trying to change their football from a Grande to a Venti without the refs noticing!  :)

Btw, here is a big Ryan gripe; I hate it when people say "oohhh, I can't drink a latte; it is way too strong and way too much caffeine!"  I'm always thinking "you fool, it's a shot of coffee and steamed milk; it ain't as strong and not as much caffeine as regular coffee!"  I know, I'm a coffee snob.  But speaking of coffee the two best coffee blends I've ever tasted are Tanzanian Peaberry and Jamaica Blue Mountain.  Normally the coffee "cherry" has two seeds.  When only one seed is fertile then it develops without the other to "flatten" it.  The resulting Pea berry is more flavorful than the normal bean and produces a better coffee.  Jamaican Blue Mountain coffee is so frickin' good it's the flavor base for Tia Maria liqueur!

Ooops, I just realized just like my sex posts with no sex, I've managed to write a food post without food.

But first I would be remiss without commenting about the team cheerleaders.  I have to say the SeaGals are just a tad hotter in my book, I think I like Brittany and Lisa Marie the best.  Lisa Marie wants to be a Pastry Chef and I think secretly wants me to be her Sous! 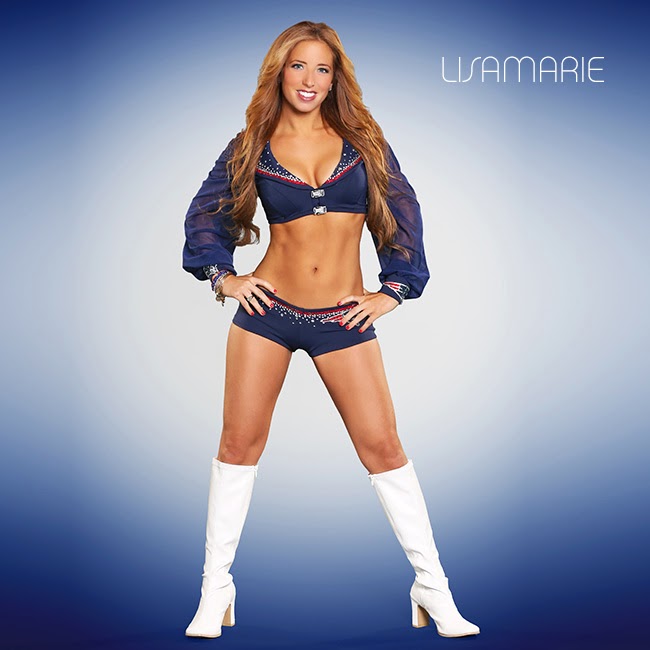 Well, I guess I better go ahead and do a recipe after all.  So have you ever wondered what to do with all those dang grounds after drinking all that coffee?  Did you realize those little specks of black dust can be useful?  Yes, they can actually make great fertilizer for stuff like tomatoes.  But if you just don't feel like brewing those grounds you can also use them for a dry rub
BBQ!

Combine all ingredients in mixing bowl until evenly mixed.  Rub mixture down vigorously over and into your favorite meat and let stand for at least an hour before slow roasting.  Now if you are Ryan and your favorite meat is, well you know!  Don't rub this mixture vigorously onto your meat; dang that coarse salt and pepper would hurt!  Rather, rub this onto a nice Pork Butt or maybe even a Boston Butt if you are a Patriots fan!

Have a nice Super Sunday!  If you need any Super Bowl recipe ideas here are my past Super Bowl Foods Posts:

Darling sexy man: you must possess ADHD. I love your male rambling thoughts, but they are truly all over the place.