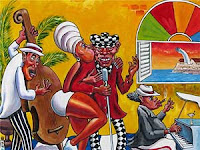 Yes for me the truth has always been found in the mountains as this song goes.  Bruca Manigua was written in 1937 by Arsenio Rodriguez.  It is written in a creolized version of Spanish called "bozal."  For Rodriguez the song was a form of "afrocubanismo," helping to illustrate the African cultural influences within Cuba.  The chorus repeats the phrase "yenyere bruca manigua" over and over which loosely translates to "in the mountains lies the answer."  Specifically, the answer for many Africans in colonial Cuba was to escape to the island's inland mountainous regions.  On the surface the song is wonderfully light and pleasant to listen to, yet dig deep and the composition in total is a beautifully evocative fusion of so many themes and cultural experiences.

Now, the name Buena Vista Social Club creates an image of classic Cuban culture of the 1940's and 50's, a Godfather'esque time of flavorful intrigue when Cuba was an open melting pot of many cultures.

Shannon has lately taken to playing the Buena Vista Social club on many a Saturday night when we have the time to prepare dinner from scratch.  We purchased a wonderful cookbook during our trip to Arizona and have been working our way through the dishes.  Shannon gives the directions and I do the chopping of veggies for that fresh mole (that's a Mexican sauce not a critter, I don't know how to do that accent thing in this editor).  Those dishes are mostly pan-Southwestern, influenced by Mexican, native American, and cowboy tastes.  But it is that fusion that I love. As much as I love Southwestern cuisine, though, I love Cuban or rather Floribbean cuisine even more.  Recently we found our way down to Miami.  Anticipating our trip I had only one destination in mind - Puerto Sagua.  Puerto Sagua is a unremarkable looking diner/restaurant on the edge of the Art Deco district in Miami's South Beach somewhat metaphorically fused between the craziness of Ocean Dr. and the touristy "Little Havana."  Walking up to it you would expect to see Mel behind the counter yelling at some floozie waitress serving greasy food.  But don't walk past!  Inside is one of the best restaurants I've ever visited.  I assume the owner's took the name from their home in Sagua La Grande on Cuba's north coast, the Venice of Cuba.

The restaurant's signature dish is Seafood Paella.  Paella is the signature dish of Spain and thus it often finds it's way onto the menus of any Spanish influenced restaurant and the palettes of their patrons throughout the Southeast and into the Caribbean.  To paraphrase a Spanish food historian, paella symbolizes the union and heritage of cultures.  As Spain was at the crossroads of Western European and African cultures throughout time, she then passed that culture and cuisine throughout the Caribbean once again mixed with African culinary influences at a different place and time.

All that comes together at Puerto Sagua when one sits in front of a pot of that wonderful Seafood Paella.  If you come to Puerto Sagua for paella, plan on ordering a carafe of Sangria while you wait; the dish will take 45 minutes to prepare to order.  But it is worth it once it comes to your table.  The ingredients are a wonderful fusion of a variety of tastes.  The saffron rice is a warm and nutty base and a contrast to the soft rings of calamari, sweet peppers, yuca, and onion.  Within the dish comes muscles, a clam, and a lobster tale not to mention chunks of white fish and, just for good measure, chicken legs to add flavor.  Do make sure to save your appetite as it's a monster portion and truly enough for two.  Of course saving your appetite is difficult when the waitress hands out plates of delightfully crusty Cuban bread and you order a steaming cup of Sopa de Pescado (fish soup) and oh btw you want to try an appetizer of Platanos or Yuca Frito!

I wish I could give you the exact Puerto Sagua recipe but I could not pilfer it.  I did however find a recipe for another one of the restaurant's signature menu items, the Cuban Sandwich.  I love Cuban sandwiches.  Looking at the recipe I find once again how Spanish culture and influence weaves it's way into so many regional cuisines.  In Miami it's a Cuban sandwich but drive A1A around the horn of Florida and along the coast of the Gulf of Mexico to New Orleans and you find that same influence in a Muffuletta.

*     Melt small amount of butter in large skillet over medium heat on stove top burner.
*     Slice baguette in half, lengthwise.  Spread 1 Tbs of butter evenly over half of bread.
*     Spread mustard over half of bread on top of butter.
*     Layer ham, pork, and cheese on bottom half of bread and place other half over.
*     Place sandwich on skillet and press down with spatula.
*     Cook for 30 seconds, flip over, and cook on other side until golden brown and cheese is melted. 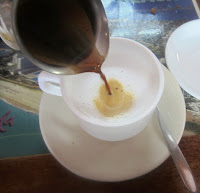 At the end don't forget dessert, the flan at Puerto Sagua is spot on!

Just for good measure, Puerto Sagua is great for breakfast or just a hangover helper as well along with a Cafe con Leche!

Enjoy and pretend you are Michael Corlioni in 1955 Cuba or perhaps Antonio Bandaras in the Mambo Kings!  :)

And think about that line "in the mountains lies the answer."  For me the answer often does lie in my beloved Appalachians.  For you it will perhaps lie somewhere else.  But for most and with me as well the answer can be found in food as food and cuisine so often binds us together and thus releases us from any real or imagined boundaries we live within.

Now click below and enjoy the Buena Vista Social Club and think about Miami or the mountains.

Email ThisBlogThis!Share to TwitterShare to FacebookShare to Pinterest
Labels: Food/Lifestyle

Mmm... paella. I adore it and it's one of Philip's favorites so there is an added element of sexiness to it! You lucky man! The Cubano looks easy enough for me to do... some day. Yummy post!