I am a Sex Machine Ready to Reload

I bet that got your attention!

Actually I didn't plan on posting today but I wanted to send out some scientifically proven feel good thoughts on this Friday morning to all of you.

And by feel good I mean sending you some up-beat music at +150 beats per minute, happy lyrics, and in a major key.

Apparently a survey by British electronics manufacturer Alba, and confirmed by cognitive neuroscience Dr. Jacob Jolij, confirms that a combination of a fast beat, major key, and happy lyrics is the exact recipe needed for a feel good song. 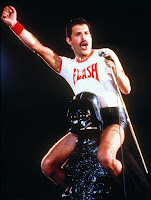 And what is the most feely-good song ever?  Well according to the survey it's Queen's "Don't Stop Me Now," containing those very gripping lyrics above.

Something tells me Freddy Mercury has something to do with all that feel good stuff.  He is, in my opinion, the best front man in all of rock and roll history.  Now in saying best front man I have no clue if he was a pitcher or a catcher (frankly I don't care) but by best front man, I mean best lead singer.  Anyway the song is fantastic, Freddy is fantastic, and the song also has one of those classic Queen guitar riffs at the break.

Some of the other feel good lyrics to this witty song are:

"That's why they call me Mister Fahrenheit"

"I wanna make a supersonic man out of you"

"Don't stop me now I'm having such a good time"

I think the last line says it all!  I definitely feel happier now, don't you?

Jolij states "my analysis confirmed very nicely what we already knew from literature:  songs written in a major key with fast tempo are best at inducing positive emotions... virtually all 'feel good' songs were in a major key and all of them were at least 10 beats per minute faster than the average pop song."

So now you now why some songs make you want to roll down the windows and sing loudly!  Essentially major chords are sharp (or bright) as opposed to a flatter bass sound.  I'm no music history major but dudes like Beethoven tended to write in those melancholy minor chords.  Beautiful music, but sometimes it makes you just want to crawl back to bed, pull the covers over your eyes, and sleep all day.  Actually, come to think of it, Beethoven's Fur Elise (in an overall melancholy A minor) is an excellent example of movement from minor to major chords that takes one from somewhat doleful reflection to joy back in forth in a rondo format!

But keeping it happy, the Huffington Post article goes on to point out other "feel good" anthems:  ABBA's "Dancing Queen (you know I have a major hard on for Agnetha)," the Beach Boys "Good Vibrations," and Billy Joel's "Uptown Girl."


The article failed to mention but I believe it's true that Ryan's blog makes one feel good as well because you can stop reading after 10 words or 10 seconds and feel very good about your fast paced major decision!


Now take a listen and be ready to FEEL GOOD!

That being said, while I like Don't Stop Me Now," I have to say I like "Keep Yourself Alive" even better.

Who can't identify with those lyrics:


"well I've loved a million women in a belladonic haze...
and I ate a million dinners brought to me on silver trays..."


Ryan notes:  the song "Keep Yourself Alive" speaks to Freddy's debauchery on the road.  Strictly speaking "belladonic haze" likely means having sex with women while under the hallucinogenic affects of various drugs and alcohol.

Posted by Ryan Beaumont at 8:47 AM

Whee! Thanks for the Friday feel-goods! Would you believe... I never heard that Queen song? Hubby says he never heard it either. And we were alive when it came out! Learned something new today!

@ Sassy - Actually I had never heard it either. I believe it was a minor hit in the UK but didn't get much traction in the US. I guess we don't appreciate all that British sunshine! :)