You Say Why and I Say I Don't Know

So I don't talk much about politics on the blog but it is one of my favorite sports.  One thing I really enjoy about my relationship with Sandee is that we are so far apart on politics yet we have fun with it. See I grew up a "left of center" guy which means in America today I'm a Saul Alinsky socialist.  :)

Btw, does anybody actually know who Saul Alinsky is other than Sarah Palin?  Or did she just read about him on a bubblegum wrapper?

Ryan - Are you watching the Insane Clown Posse tonight?

Sandee - You're saying my posse is insane when your's can't keep a lid on their server?

Ryan - So I'm to vote for the DONALD because he says he will "get along" with Putin and I should just trust that?  Is that kind of like looking into his eye and seeing his soul?

Sandee - Are you talking about my W?!

Ryan - I know nobody can replace W in your heart but your Cuban Senator just sounded good.  Carly is pretty sharp tonight.


Ryan - Is Ted Cruz an actual living creature or is he actually a Disney animatronic figurine?

Sandee -  lol, yeah he's an odd one.  Glad you're watching , your next Pres is up there!

Ryan - Scott Walker is sweating like a Johnsonville brat on a hot grill!

Ryan - At least she doesn't have to listen to Lindsey "I'm John McCain's biyotch" Graham!  Sorry I had to pull over to text that.

Ryan - I just realized why Bernie Sanders scares me, he reminds me of the evil preacher in Poltergeist!  "I just love gettin' around and talkin' to people 'bout minimum wage increases and common core and reducing CO2 emissions, even on a rainy day!

Sandee - Hahaa, I keep telling you to campaign!

Ryan - You wouldn't want me, I'm limp wristed liberal; we would all be on welfare and living under Sharia Law with guns only in the hands of bad guys and only Mexicans for neighbors.

Ryan - "We need government to get out of the way and let the people lead?"  Has Ben Carson ever seen the people in Walmart at midnight?  I don't want the guy with no teeth, baggy shorts, and drinking out of a paper bag in the back of sporting goods to determine my tax code!  I'd rather have government bureaucrat.

Ryan -  OOHHHH, Carly is getting pretty catty about Hillary!  OMG Marco you just scared the bejesus out of me, I think I'm going to crawl in a hole and never come out until Iran and North Korea stop nuking us!  :(

Sandee - NO, don't diss my Marco

Sandee - Don't know about that but... You probably have more accomplishments than Hillary!

Ryan - Marco is doing well tonight, I bet he seizes the momentum.

Sandee - He is, Rand Paul tanked a long time ago.  They don't even ask him anything hardly. 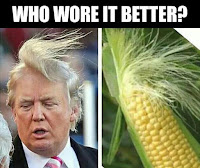 Ryan - I'm just not sure I see the next "decider" in chief on stage.

Ryan - I will say Rubio and Kasich are the only ones that are not Crackalackin' craza!

Ryan - So are we voting Cristie or Walker off the island tonight?

Sandee - Are you saying you were a pot fiend in college

Sandee - Sure!  That's what all you Democrats say.  You know you never got that stain off my dress!  :)

Ryan -  Goodnight, I'm tired from all that brainy thoughtificational talking!