'Cause I Know How it is, Go and Handle Your Biz

A Musical Intra-Generational Analysis About Musical Interpretations of Gettin' Busy
by R. Beaumont

As you may have read in the past I love generational analysis.  At my age I now often find myself starting to say "in my day we didn't do ****," or "I can't believe these kids today, they are so ****!"

As an aside, I can't believe I now have two teenage daughters!  So this stuff is a part of my daily life. Also, my job keeps me pretty in tune with the younger generations and what they listen to.  As such I really do tend to be a generational apologist.

So with that in mind I would like to analyze a sample of today's music and make an attempt to be that generational apologist.

"Shawty, I don't mind if you dance on a pole,
that don't make you a hoe.
If you're leaving with me
go make that money, money, money...."
- Usher/Juicy J

Monsieurs Usher and Juicy go on to say

"You can take off your clothes
long as you coming home, girl, I don't mind..."

Well, it does have a nice beat and while not exactly iambic pentameter it does have an interesting derivation.  M. Usher's lines predominantly lead with a soft "inversion" linking phrases with an delicate caesura.

In that vein we can see a Shakespearean influence where:

"now is the winter of our discontent" or "to be or not to be, that is the question..."

"throw some hundreds on that ass, walk her out the club..."

I find myself calling this tri-ambic pentameter adding a pronoun or adverb (some/that/her) to modify the additionally accented "foot" (hundreds/ass/out) which may be a noun or verb thus forming the delightfully sexy triumvirate phrase "on that ass."  It is also tri-ambic in the sense that thinking of these actions is like taking three Ambiens, your actions are likely to impair your thinking and reactions much like the dudes who are slappin' those hundreds on M. Usher's girlfriend's ass.

But my eldest daughter states "it's a positive message because he isn't jealous and he's letting her follow her dreams!"  Yeah, OK; I guess we can go with that one.  Let's just hope if my daughter wants to pursue lively dance with the investment in all those dance lessons she perfects  Balanchine not balancing on a pole!!!

So now the middle-aged man in me says; music wasn't like that back in the 80's.  We used to listen to goods stuff like.

"You can say anything you like
but you can't touch the merchandise.
She'll give you every penny's worth
but it will cost you a dollar first."
- the Tubes

"Those soft fuzzy sweater
too magical to touch;
too see her in that negligee
is really too much..... Angel is my centerfold..."
- J Geils Band

and for you grandparents out there who could forget

"and givin' yourself to me can never be wrong...."
-Marvin Gaye

You know listening to all those songs on YouTube, they are really just as bouncy and lyrical as M. Usher's ode to his stripper.  What really makes J. Geils' Centerfold any better really?  And KISS?  Well, nobody ever accused Gene Simmons of being a great bassist and that hard bass and Paul Stanley's screaming is actually quiet scary and overbearing in comparison to M. Usher's gentle message of young women pursuing their dreams towards self-actualization. 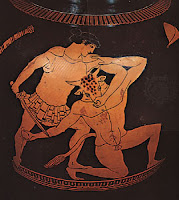 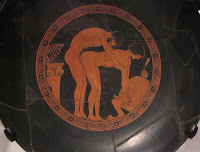 I kind of liken this to those ancient Greek artifacts we used to look at in history books.  You know, the pottery with some Greek hero killing a man beast to save the pretty young heroine!  Well, what we never see in the history books is what's on the backside of that pottery; which often was that hero gettin' into the backside of that heroine!  :)


Bottom line is people have been talkin' about, writin' about, and drawing pictures about gettin' it on since the dawn of.... well, gettin' it on.  So I say just take a chill pill and enjoy it all.

Because, you know, regardless of taste I sure would like to be M. Usher and be able to sing that song to a lovely lady:

"We can still party hard in your birthday suit
knock that pussy out the park like my name Babe Ruth.
Shawty she just want a tip, I just want to see her strip.
If you *uck me like you love me shawty you might get rich.
Have her own cake, her own place, blow her own gas, no role'
When we in the bed she like to roleplay, tell her friend to join in both ways."

Posted by Ryan Beaumont at 1:55 PM