We Spoke of Was and When

For the majority of my posts I tell of some AM adventure, of some funny idea that pops into my head, or some aspect of relationships that I want to talk about and then ponder some song that fits as a title.  Sometimes I hear a song and park it in the back of my mind and wait for the right time to use it as a theme or lyric title.

The Man Who Sold the World is a song I've wanted to use for probably three plus years.  I've started posts using it as a title but always veered away.  I wanted to use it in the right way.  The song always felt a bit like me, speaking of a person who seeks connection to a world they are vital too yet only feel tangentially a part of.  To me it feels like a soundtrack to a latter day Stranger in a Strange Land/Spy Who Came in from the Cold.

I've never really been a big fan of Nirvana but I do love the acoustic version of the song they performed on MTV Unplugged.   To me it is one of their best, most memorable performances and probably the most popular rendition of this song.


I had heard the song before on First Wave as one of Richard Blade's hidden gems from his back bin of 80's songs.  I knew the song had a history and so as this blog often does it sent me on a musical research assignment to discover the potential meaning of the song. 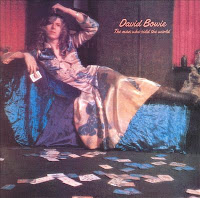 That is where I found the actual writer of the song and why I use it today.

David Bowie was never one of my favorite artists.  Sure I liked him and appreciated his work but he was never an artist who occupied a lot of time on my sound system.  And yet songs like Major Tom, Heroes, and Changes always seem to put an exclamation point on parts of our lives.  David Bowie was one of those artists other artists liked and emulated.  And thus much of what we enjoy today emanates from him.


"I laughed and shook his hand, and made my way back home
I searched for form and land, for years and years I roamed"

Bowie wrote and then released The Man Who Sold the World in 1970 as part of his third album with the same name.  The other worldliness of the song speaks to an interest in the connectivity of extraterrestrial or ethereal worlds with ours that would inspire Bowie in later songs and movies.  The song seems to be influenced by Robert Heinlein (at least wiki says so) who wrote Stranger in a Strange Land and the Man Who Sold the Moon.  In Stranger and in the Man Who Sold the World the narrator is clearly an active agent in the occurrences spoken of and yet is not clearly connected to the world in which the other characters he encounters are intimately a part of.  The narrator is in essence a voyeur and perhaps critic of the lives he happens upon thus shaping yet not overtly directing society; a witness rather than
an actor.

To me as I look back, I see David Bowie as an unbiased witness and testifier and thus
influencer, though not designer, of the culture of his time.  He presented and illuminated but did not lecture or judge.  For that I admire and feel connected to him.


"I gazed a gazely stare at all the millions here
We must have died alone, a long long time ago
Who knows? not me
We never lost control
You're face to face
With the Man who Sold the World"

Posted by Ryan Beaumont at 9:43 AM

Seems appropriate to stop and think about Bowie's impact doesn't it?

You draw the most amazing parallels and lessons from the music. I wish it spoke to me that way, but it doesn't so I'm very glad of your research and interpretations! A fitting tribute to a unique musician. RIP David Bowie.