Paradise by the Dashboard Light

Or Mamma Told Me Not to Come

I first want to say thanks to Kat for putting all of this together, these have really been fun.  Kat conceived of this idea but sent out an e-mail asking for suggestions as she planned her topics.  I, of course, am always willing to put in my 2 cents.  Looking at the list of topics you can probably tell the few I may have had a little influence on.  If you know Kat you'll know subjects like Outdoor and Kinky Sex are right up her alley.  But if you have read this blog you might be suspicious that topics like "who are you going to screw right before the Mayan Apocalypse" and what is your "Super Bowl of sex" show the indelible, screwed up, and mindless fingerprints of moi.

But for this month we are talking about Kinky Sex.  As I mentally began planning my Blog Chain posts this one in particular I quickly began to worry about.  First times, outdoor sex, lost loves are easy; we all have those.  But Kinky Sex and Ryan, I have to admit, is a slippery slope.  I know you're saying "what kind of stinkin' sex blogger are you that you can't come up with one kinky act in your whole life!"

That is how I feel about "Kinky."  It's not that I am against it.  I am sure with the right person I would do a lot of odd and unusual things.  It's just that I fear if I deeply engaged in the "kinky" lifestyle I'd have to become a "kinky" person and do "kinky lifestyle dude" things like wear sandals all the time and wear tight fitting dragon print tee shirts and grow a goatee or maybe even get "inked" or take on a nipple ring.  Too much for your's truly who, as my blog says, is the epitome of the "average" guy.  In fact if you met me you would probably say I'm related to Mitt Romney even though I'm a big time Dem.  But hopefully you get the point.

So I'll try to get kinky today but you have to understand this is living on the margin so to speak.  It may be kinky to me but to Kat it's probably just a day at the office!    :)

But what I lack in quality I'll make up for in quantity and give you 2 stories!

Paradise by the Dashboard Light


Shannon's parents are on the conservative side.  So even after we were engaged we slept separately the few times I spent the night during our engagement.  Additionally, they were both essentially retired so they barely ever left the house so alone time was almost nil.  Her house was also a small rancher so no basement to slink off to for a quickie.   :(

We took the long way back to her house driving through some neighborhoods and looking at Christmas lights (it was the holiday season).  Finally we came to a dead-end.  One of those streets they start before they begin a new development but as yet no houses had been started.  I realized this was the spot I had been looking for even though I had not really realized I had been looking for a certain spot to do a certain thing!

I pulled around to the back of the cul-de-sac but facing back out so I could view on-coming traffic.  There we stopped.  And soon there we were kissing and fondling.  Quickly coats came off, shirts were unbuttoned, and undergarments were shoved to the side.

Shannon leaned down and gave me a nice smooth blow job, she is/was actually quite good at it.  As I have said I'm a rare guy who is not enamored with blow jobs but this was pretty nice.  But that is not how I wanted to finish up.  I let my driver's side seat all the way back and spread my trench coat out along the seat.  Shannon slipped over onto the seat, naked from waist down with shirt open and bra off.  I moved on top of her naked from the waist down as well.  I slipped in easily and we had quick and energetic sex.  Shannon is very delicate but sometimes she does like it hard and the floor-board of the car was excellent leverage to thrust into her.  Her legs were wrapped around me.  Shannon is very flexible and did this thing where she pulled my waist into her with her legs and feet while moving her waist in rhythm with mine.

Soon the windows were completely fogged.  The great view of on-coming traffic was useless as my focus was on the rapid and satisfying sex.  Luckily we were left alone on that cul-de-sac that evening and luckily it didn't take long for us to come to orgasm.

After we had a big laugh when I had a big stain on my jacket that would remain a fond memory of that night for many years.  I also remember the slight foot imprints from Shannon's feet temporarily on the dashboard of my car to both sides of the steering wheel.  Wouldn't that have been a great explanation had we been in daddy's car.

We got our things back on and drove home.  Shannon's mom and dad were glad that we had been able to get away and relax at the movies for a little bit.  I was glad that I had just released a lot of tension into the softness of their lovely daughters super fine body!

Mamma Told Me Not to Come

So around that same holiday season Shannon and I spent some time at the Beaumont residence.  The Beaumont home is actually not a large plantation on the Louisiana bayous as you might imagine.  It is however a "split-level" with the guest bedroom in the lower level.  Absolutely ideal when you want to screw your new wife as mom and dad are essentially two floors up.

So one night after a shower I walked down the hall to the guest bedroom to find my dear Shannon naked on the bed sitting on her knees with a timid smile on her face.  In response to my certain gasp and jaw dropping she giggled and leaned her body forward to all fours with back arched down and slightly wiggled her ass while continuing her sly smile.  With that "glint" in her eyes that always got me she said "you want to do it?"

Now what kind of question is that!

Thankfully I was only in my towel which probably hit the floor before the end of her sentence.  Shannon raised back up and I moved behind her.  I kissed her neck and fondled her breast, pinching ever so slightly until they were rock hard.  I then moved my hands to her waist and around her ass enjoying it's soft circumference.  I then moved my right hand to her pussy and pressed my finger into her.  She "oohhed" with delight.

Shannon then leaned forward and reached her hand back through her legs and gently grabbed my dick and guided it into her.

With that I screwed her as hard and fast as I could.  A mirror was in front of us and I could see her tits moving in the rhythm of my thrusts.  Our eyes meet in the mirror, she was enjoying the show as well. 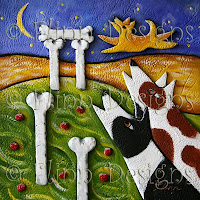 It may have been a Three Dog Night outside but it was steaming hot in that room and I was definitely throwing Shannon the bone!

I think at one point I heard the dog outside the window to our left on her final "potty break" of the night.  But that was of no concern to Shannon now.

Posted by Ryan Beaumont at 6:00 AM

Oh my... you wrote about sex! Twice! I may faint and... other things. Great post! It's so fun being on the chain gang with you.