Who is Ryan, the Velveteen Husband, and Other Stuff

"If you believe they put a man on the moon.."

Yes that title is a rip-off from that REM song that references Andy Kaufman spoofing Elvis which I guess in a way is what I used to try to do with Riff Dog to get attention.
Btw, several months ago I watched a Disney movie with my girls called "Radio Rebel."  The girl in the movie (Debbie Ryan) has a step-father who is a producer for a local radio station.  As I watched the movie it hit me that this is what I picture Riff  looking like.

Today I want to continue getting back on track by going back to the beginning.  My next few posts will retrace my steps in a Fairy tale'esque way.

But today, I will answer the question, who is Ryan.  No I am not going to reveal the guy who is typing these digits - he is WAY too boring.  What I want to talk about is how I evolved or devolved into the sort of caricature that I have created.

Two points first of all:

1.     I just like the name Ryan.  I always wanted to give my son a name that sounded like a baseball player.  Ryan fits that quite well.  Problem is, I never had a son.  But Ryan was going to be the name if I ever had a son.  Not only do I like it because it sounds like a baseball player (e.g. Nolan Ryan) I got to thinking about the name one night when I was watching that movie Ryan's Daughter.  I always loved that movie.  It is beautiful, tragic, and melancholy but for some reason I am always intrigued by that paradox.  In the movie two wounded people (a soldier physically and a woman mentally) form an ill fated romance against the beautiful backdrop of Ireland post WWI.

2.     Many years ago before Facebook and Zombie games there was this thing called Second Life.  I heard about it and one day when I didn't have anything to do I logged on.  You had to pick a character name from a selected list.  I chose Ryan and then went down the list of last names.  When I saw Beaumont it hit me.  That is who I wanted to be.  It said baseball player, all-American guy, Southern with perhaps a hit of Louisiana Cajun'.  And so I became Ryan Beaumont.  Until I realized that you had to pay to do anything in Second Life and then Ryan Beaumont, I guess, became some penniless phantom on Second Life and I didn't think on it again.  That is until I started wanting to comment on those blogs about Ashley Madison that I started to read in Spring, 2010.  And so I created Ryan again.  But this time he began to speak.  Soon, he started a blog.  And soon he became somewhat my alternative personality in this virtual world of blogging and Ashley Madison.

So what else do I want to talk about.  Oh yeah, back in 2009 right when the economy was tanking this strange movie came out Up in the Air (which btw happens to be the last movie Shannon and I went to together).  The main character was this guy Ryan Bingham which I just happened to related to.  And there happened to be this female character, Alex, that sure did resemble emotionally and even somewhat physically to the beautiful woman that sat next to me in the theater that night.

You see one of the hidden meanings of that movie is the evolution of a guy.  Ryan is a corporate machine chewing up mileage as if he was a robot.  I remember a customer of mine once saw me at a grocery store.  She laughed because she said it was odd to see me outside of the work environment.  She said jokingly that she just thought of me as some Animatronic device that just popped up every time she came in.  Of course she was to some extent right, through much of my life I have been nothing if not working.  Early in our marriage Shannon often would lament when she could tell I was in "work mode" which was the norm

But that movie, Up in the Air, was very moving to me as Ryan evolved through his relationship with Alex, his family (long lost but then found), and his young protege.  In the end he became alive because of the pain he felt when he started to feel for Alex.

Later when reading about the movie I found this article HERE, that compares Ryan Bingham to the Velveteen Rabbit.  I was gripped; that concept hit home so clearly.  I was not only Ryan but I was in fact the Velveteen Husband and I needed to get these thought out some way.

So I started to ask the question: 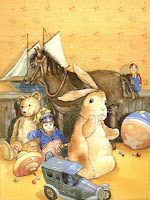 “What is REAL?" asked the Velveteen Rabbit one day... "Does it mean having things that buzz inside you and a stick-out handle?""Real isn't how you are made," said the Skin Horse. "It's a thing that happens to you. When [someone] loves you for a long, long time, not just to play with, but REALLY loves you, then you become Real.""Does it hurt?" asked the Rabbit."Sometimes," said the Skin Horse, for he was always truthful. "When you are Real you don't mind being hurt.""Does it happen all at once, like being wound up," he asked, "or bit by bit?""It doesn't happen all at once," said the Skin Horse. "You become. It takes a long time. That's why it doesn't often happen to people who break easily, or have sharp edges, or who have to be carefully kept. "Generally, by the time you are Real, most of your hair has been loved off, and your eyes drop out and you get loose in the joints and very shabby. But these things don't matter at all, because once you are Real you can't be ugly, except to people who don't understand... once you are Real you can't become unreal again. It lasts for always (the Velveteen Rabbit).”

So my next trick for you before I get back to my story will be to recap my adventures to get you back up to speed.  I did the same thing at the end of last summer HERE.  But this year I want to do something different.  Have you heard of the story, The Miraculous Journey of Edward Tulane?  It has similar themes as the Velveteen Rabbit.  So like the rip-off artist that I am I will now re-tell my story next week (briefly, hopefully) to the tune of that story so to speak.  After that I will get back to my current life or at least life from last January going forward and then maybe I'll catch up again some day, some wild and crazy adventures have certainly befallen Ryan in the last six months as is my norm.


"If you believe there's nothing up his sleeve then nothing is cool (REM)."

Wow! What a post! I adore it when you weave music, movies, children's books and your history together into an amazing tapestry!