Hey Life, Look at Me

So I've been keeping myself on a six posts per month diet.  The problem is that it means I have to get to six posts per month which sometimes is hard anymore given how busy I've become on the work front.  But whenever I get into these writing blocks I always think "what is the easiest way I can get out of this predicament?"  I know, lazy.  But that's just how I do things!

So today I'm going to go with a long standing tradition of mine and that is to copy other bloggers.  See, easy!

One thing I've seen other bloggers do is answer questions from some of their readers.  I really don't get very many e-mails from readers, nor do I get a lot of questions.  I guess people can just infer from my blog that I'm pretty vacant and obtuse so there is no reason to ask me any deep moral question.  Or maybe my readers are smart and know never to ask if you are afraid of the answer!

But I do get a few questions.  So here they are with my unique way of answering.  Trust me, avoiding the question has been an oft chosen tactic in my personal, work, and now blog life!  :)

*     So Ryan, I see a lot bloggers have ads on their pages or even links to Ashley Madison but you don't, why?

Such a good question.  You know I'd like to say it's all about artistic integrity.  My artistic emotions can't be clouded with commercialism.  However, if you have been watching Fox News you would know that is certainly not the case.  Truth be told I'm a Kenyan anti-colonial revolutionary who shuns the free-market system and has disdain for the commercialized capitalism this country was founded on.  I'm simply trying to change the direction of the country.

See, so many people would consider that a simple black and white, yes/no question.  But I just don't roll like that.  I would equate my marital sex life to Hillary Clinton's stance on the abortion issue.  As Hillary says with abortion, my marital sex life is "safe, legal, and rare!"  And by legal well that's obvious, by infrequent well that should be obvious as well.  As for safe to the extent that the safest way to avoid STD's is through abstinence then I can assure you we are being VERY safe!

See again here you must consider nuance.  The question you really have to ask yourself here is, "what is the definition of 'is'?"  I googled "is" and it is apparently the third person singular indicative of the verb "to be."  In the singular finite sense of the verb to be it would be hard to say that I would often make the expression "I am on Ashley Madison."  So in that case I am not active.  However in the non-finite sense one could make the expression "he could be on Ashley Madison," or "there are still some times when he finds himself on Ashley Madison for various reasons" and you wouldn't be incorrect in either case.  In fact in the transitive sense one could say that I am at times still completing action verb-like activities on Ashley Madison that do in fact have direct objects.  And even on a more literal level one could even consider me a figurative Transitive Vampire in that I still seek "lively, gothic, narrative tales to spin" on my blog.

Anyway, not sure if that made sense but surely you see why people don't tend to ask me very many questions.   :) 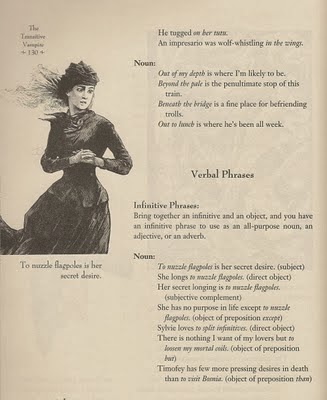 Now that is a really good question.  One that I do so very often consider daily.  And honestly I waffle.  On some days I think "I've decided to vote yes to blogging after first deciding to vote to stop."  Then again, as I said to one reader "read my lips, no new posts!"  You saw how well that succeeded.  But finally I've decided to say this "if you like this blog you can keep it!"  And by that I mean that if you've been kicked off this blog because you have a cheap internet provider or live in a state with few internet connection choices you may have to lose it first but then you will probably be able to read it better with a new internet provider that, while slightly more expensive, may be subsidized.  I don't know, I hear different versions between Fox and MSNBC but I think no matter what I'll still be around for a while.  You know as long as people don't stop getting sick of reading about a rumbling, stumbling, bumbling husband - I'm sure I'll be around in some form or another.  I'm mean like health care people are not going to stop *uckin' and having babies because they now have to go through socialized medicine so I guess people won't stop coming back to this silly ridiculous blog!