"I've never written more than 250 words, not even in high school."
- Don Draper

I suppose it's fairly shameless to offer up my little interpretation of Mad Men just a day after the last episode.  What could I possibly offer to the analysis?

Critics are offering many interpretations of the last scene.  Most seems to feel it was a pretty good ending to a fabulous show, perhaps better than average; certainly better than Seinfeld.  I thought it was absolutely spot on.

In midst of his final (of many) existential crisis of the series, Don comes to grips with himself on a cliff above Big Sur in the middle of meditation class.  And what conclusions does he come to regarding the universe and how he fits into the grand scheme of things??? 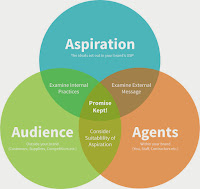 That Coke should come up with a jingle to catch ahold of the global consciousness and hippie movement of the late 60's in a very Partridge Family'esque easily digestible form for middle America that drives brand loyalty through a brand promise that links the audience with aspirations and a product that delivers happiness without threatening core American values.

But, but..... the final episode must have meaning and purpose; Don must become some Jedi master or maybe in a darker ending pay for his sins!!!

Why is he allowed to devolve back into corporate greed at the moment in which he develops consciousness?

Why?  Because that is who he is; he is an Ad man.  He has an unquenching thirst to provide happiness to the masses.  Well, that and a unique knack for being able to connect with people and to get them to open up that which they desire and thus the desires of a common society.  As Don has said many times in the show "I sell products, not ads."  But really what he means is that he sells aspirations.  Perhaps he searches for the happiness that was never part of his growing up or the happiness he wishes to find in his next lady conquest. What does it matter, Don is an Ad man and that is what he found meditating on the hill.  That's all it is.

Of course in reality, the real Coke ad was in fact created by the very real McCann Erickson Agency.  Specifically, a mid-40's Draper'esque Ad Man, Bill Buckner, conceived of the imagery and theme while his plane was delayed in Shannon, Ireland.  In disgust over a delayed plane, passengers passed the time sharing stories and drinking Coca Cola.  And thus an iconic ad was created out of just trying to kill some time in an airport.

I didn't really start watching Mad Men until about season 4.  From there I was quickly hooked.  As an affection-ado of marketing, it's affects, and how it can be perfected; I easily started tagging along.  I binge-watched to catch up.  I enjoyed the aura of Don but more importantly the aura we placed on Don.  Don is in fact an advertising campaign, selling us what we want out of a man through imagery all in easily digestible sizes.


In thinking about my day and last night's episode and my next blog post I realized that Advertising can be art.  Perhaps not the 4/5 word tag lines of a brand or those 250 words Don writes.  But the culmination of imagery in and around Advertising in a modern world represents the aspirations of a society just as much as the Sistine Chapel in some ways.  It represents who and what we want to be and what we desire.  It defines what makes us happy, what motivates us.  To work, it must inspire us to act.  And thus the culmination of those 250 words represents an art and thus worthy of our consciousness.

Likewise, I find blogging to then be an art.  Surely, not a single post about if it's proper to look a women's butts in a gym, how searching for college is like searching for women on Ashley Madison, and certainly not about hooking up with married women.  But the culmination of all those 250+ word essays on life to me represent aspiration and inspiration.

Oh Jesus Ryan, saying blogging is art just because you do it is rather pompous, isn't it!  Just because you think doesn't make you Descartes, it just makes you a person who thinks about a lot of goofy stuff.

But then again, isn't that why we like Don Draper; because he is who he is?  Because he is there to sell us that product that we want to be sold?  He actually believes in who we are and helps us see how who he is is in fact what we desire.

I think I lost my meaning but I think the point I was trying to make is that the culmination of blogging (like Don's ads) is worth something not only to us but to those around us that might be moved by whatever we are communicating.  Blogging feels good because we don't really know one another so we don't have to be fake.  We tell each other exactly who we are and that truth can be as inspirational as anything else we come across in life.  And I suppose I could also drop some sort of meaning and strategy around Ashley Madison.  As I said before, success on AM is all about brand identity.  Create and fill a need, find in yourself that which will inspire others to act.  On that virtual tabula rasa create truth by being who you are and letting others be who they are.  Yet, in doing so, make who you are that which is desired by another.  And well, if you can do that on AM, on blogging, or on an AMC movie classic maybe you can do that in all life ventures.  Or to many it's just that ego boost that allows you to say, I just passed 300,000 hits (which I just recently did).  Who knows?

As for me, I'm a guy who likes to rip off lyrics, movie quotes, and rom-dram themes to illustrate a point, often not so well and wrapped in too many layers and certainly for more than 250 words.

But that's who I am.


Btw, I think the meaning in this episode is that guys have an insatiable need to be needed; or maybe we are just pompous jerks!

What are your thoughts on the subject?
Posted by Ryan Beaumont at 11:47 PM

Email ThisBlogThis!Share to TwitterShare to FacebookShare to Pinterest
Labels: Blogging, Fashion and Lifestyle

Love this post. I agree, advertising and blogging can be an art. As for who you are, you didn't included cooking and travel and those are some of my favorite stories!