to the South there Lies the Tales Untold 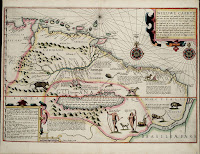 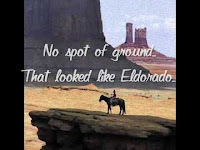 
A gallant knight,
In sunshine and in shadow,
had journeyed long,
singing a song,
in search of Eldorado....."


Eldorado (Spanish for "golden one") was a mythical place sought by many European adventurers in the 16th and 17th centuries including notable explorations funded by Sir Walter Raleigh and Francisco Pizarro.  During that Age of Discovery these explorers traveled through the jungles and valleys throughout the Amazonian and Orinoco River basins in search of mystical kings and mythical cities of gold upon an enchanting lake, lost to the known world.

Eldorado through time has evolved to become a metaphor for a "Holy Grail" type mission.  In America it seems that every western state has a town or county name Eldorado, obviously so named as the glorious destination adventurers sought in the dawn of our nation's Westward expansion.  Over time Eldorado has become as much a mythical search as much as a destination.  To search for Eldorado is as much the glory as it is to find it.  And of course the true challenge is to stay true to the mission of the journey and to avoid getting corrupted by greed in a lost journey of discovery.

In the last months of last year the organization I work for has in some sense been in search of Eldorado.  Just before the holidays we were in a position to win a great prize out west.  The fact that we were even considered for this honor was a mythical feat.  It was not likely that we would win but we did go west to seek, a small organization battling titans in search of glory an organization such as ours should not dare to seek.  Though I was not part of the group directly involved in winning the prize, I had worked in support with them through the year and did now venture with them.  Shannon joined me for the trip.  It would be a rare weekend get-away for just us.  It also took us through passages of our past life in the Midwest.  A layover at the C gate at STL was like going to a high school reunion, flying over the arch and the great Mississippi and Missouri Rivers uncovered melancholy memories of past struggles on our path many years ago.  And yet this journey, so joyous, provided contrast to that past.  Remembering where we had been made where we were and where we were going so much more rewarding.

What we were doing was exactly the thing we had aspired to many years ago when we were first married.  I thought to myself, "what does one do when they become who they wanted to be when they grow up."  I hoped this trip might mean something for us, to her.  That perhaps this contrast of who we've become verses who we were would make a difference and show us how we could be.

We made it to the event later that day.  It was as glorious and spectacular as I had hoped for.  My organization is not great but we do great things.  Nobody expects much from us but we fight the good fight.  The fact that we fight matters.  We did not win but we were there and for us the pursuit of Eldorado was all that mattered.

After the event, Shannon and I ventured down town and found a wonderful Italian restaurant.  It was too busy to find a seat but there were two spots at the bar and across the bar was a brick oven.  The scene was perfect and the meal was spectacular (best lasagna ever, maybe a post some time in the future). We 'Ubered' our way back to the hotel.  Our flight was early the next morning.  This was the moment I had hoped for but alas I was too weary to try for something romantic. Perhaps it was best, this was a step.  The pursuit of Eldorado is a process and perhaps this process starts with that first step.  For anyway, another Eldorado was our next mission.

Christmas came and went.  Shannon's glorious points provided our next venture to Dorado by the sea in the Caribbean.  Perhaps this time the quest for Eldorado would produce what I had hoped for.

I was immediately taken aback by the lush green and hilly topography of the island.  From the airport we had a pleasant and easy 1 hour drive to the resort, just enough to peak interest and get acclimated.  We parked at the resort and went up to our room and immediately from our window up high were introduced to the sea by a gorgeous rainbow out over the water as passing bands of showers passed gingerly east to west on the horizon. 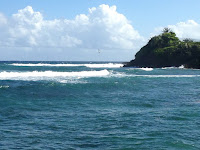 We changed into swim suits and went down to the beach to explore our new surroundings.  The resort beach was protected by an archipelago of rocks creating a breakwater.  Instinctively I jumped on the rocks to climb and explore to the edge of the sea.  Shannon of course pulled the girls back showing no interest in my explorations.  At the edge of the rocks overlooking the breaking waves was a loving couple.  It would be nice to be there with Shannon but she would never climb out on the rocks even though it was a really easy climb.  My mind wandered now on my isthmus as I watched the breaking waves, the soaring sea birds, and the small crabs washing up and then climbing about the rocks beneath me.  After some pictures and a poor attempt at a selfie I climbed back to the family.  Shannon had enough of the wind and sand and wanted to retreat to the pool and a cool boat drink.  The girls swam and Shannon ordered a Passion Punch and plugged into her I-Phone; I walked back to my archipelago of rocks, climbed, and allowed my mind to wander.

The hotel had a wonderful happy hour in the late afternoon with a great singer accompanied by a karaoke machine.  Everyone was happy and the singer performed many old 80's favorites.  I fancied that she could sing a great version of Abba's Fernando but she didn't know that song.  She did sing Dancing Queen to the delight of the crowd.  Happy hour finished and we moved onto a restaurant Shannon found on Yelp.  It was the first of many fantastic places we enjoyed over our few days.  I assumed the island would have interesting Caribbean and Latin cuisine but I was pleasantly astounded by the creole influences of the Shrimp Mufongo I enjoyed washed down with a Medalla.  The next three days passed quietly and peacefully as we enjoyed the pool, the cuisine, and some fun drives in our Jeep around the island.  We had a suite but not much chance for romance.  But it was OK, we had fun. 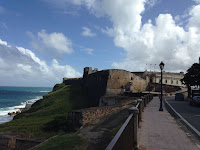 Perhaps the best was touring the old main city of the island and enjoying the breathtaking images from the castle above the seawall.

We flew back New Years Eve.  We got back in town just ahead of Midnight.  There was a party at a tavern in our town.  I know the owners, Shannon likes the place.  Knowing people in our town is one of the few value-added qualities I bring to Shannon.  Even though we were tired, Shannon was glad to stop by the tavern to ring in the new year.  We would know a lot of people there so everyone was happy.  The tavern was packed and they had an awesome DJ playing a good mix of new dance songs along with 70's/80's funk and dance.  Shannon was having fun, one of her good friends was there.  At the town tavern kids are welcome and my daughter had a friend there as well (the daughter of Shannon's friend).  The second Pinot Grigio at the tavern along with the two Shannon had had on the plane put her in one of her happy moods (although I would caveat that as her "fake" demeanor).  But the night moved on and we crept closer to Midnight.

The DJ played a slow song just ahead of Midnight.  Shannon motioned to me to come over as she had been on the dance floor with her pals.  She put her arms around me inviting me to dance.  I instantly remembered the feel of her body, so perfect in mine.  She is so slight and petite, so delicate to the touch.  Though slight she is just taller than average (for a woman) and willowy and her head fits perfectly just at my chest. The countdown began and everyone was gleeful and cheery.  Just past that last second into Midnight Shannon did lean up to kiss me.  That was not so out of the ordinary, in front of others she often prefers to maintain the semblance of a happy marriage.

However, the slow music went on and she did not detach.  She put her arms around my shoulders continuing the dance.  A few moments later I felt her lips again on my cheek.  I looked at her and she smiled.

What was this?  I understood that gentle facade of a short dance and a quick kiss but this was not necessary for appearances.  Shannon was allowing a pleasure beyond minimum expectations.  It was seductive and dangerously suspicious and at the same time excruciatingly enchanting.

Then again isn't that the reality of pursing Eldorado?  Perhaps what Eldorado provides, and certainly the pursuit thereof, is the enchantment of blurring anticipation, hope, myth, and truth. 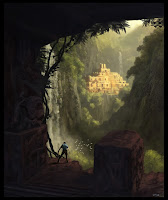 "Over the mountains of the moon,
down the valley of the shadow,
ride, boldly ride,
the shade replied,
if you seek Eldorado!"

Sorry, I just had to add that quote from the Big Short.


Sitting here on top of everywhere, what do I care.
Days never end, I know the voyage's end will soon be here,
no eternal life is here for me.
And now I found the key to the eternal dream.