I have lived a good portion of my life in and around and adjacent to horse country.  I don't ride myself but my girls do.  One thing I've learned is that girls love ponies.  And girls who love ponies grow up to be ladies who love horses, and clothes, and parties, etc, etc.

I've also learned over the years that you can certainly find women who love sports but by and large many women won't LOVE sports as much as most guys.  In fact trying to get ladies to watch sports can often just get annoying!

"Why are they kicking the ball, geesh they only have to make 20 yards on that last down.  Why don't they just throw it to one of those big guys who just stand around trying to stop the people who want to tackle the passer-guy; nobody is paying attention to them."

I know I'm being sexist but really that is the type of thing Shannon would say when I'm trying to watch Big State U on TV.  So if you have a lady who likes the NFL, go ahead and enjoy Lambeau Field on a invigorating late November night just south of the Artic Circle.
But if you don't, there are other options and the weather in the Mid-Atlantic is damn fine in late May!

In fact this time of year they have this thing called the Triple Crown that is horse racing.  Remember, ladies like horses!  Better yet, they love to party; and nothing is more of a "be seen" event than a horse race.

Around here we have one of those big horse races in Baltimore.  It's our big event and the ladies love it!  Which means you can enjoy sports and ladies at the same time.  It's called the Preakness or "the Run for the Black-Eyed Susans," which is the state flower of Maryland.  I know running for Black-Eyed Susan's is not a sexy as running for Roses, but you already have missed the Kentucky Derby! Anyway, you should try it.

Anyway, if you do watch and you want to cook out or have a party at your crib here is a great classic Maryland recipe to feature. 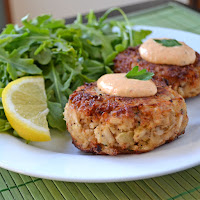 *     Whip egg gently until frothy
*     Combine Crab Meat, egg, and Miracle Whip together in mixing bowl gently, do not break down Crab Meat lumps
*      Add Old Bay, salt, and pepper; gently folding into mixture
*      Add Parsley to taste
*      Form Crab Cake mixture into 3 oz oval cakes.  Place in refrigerator to cool for 1 hour
*      Pre-heat iron skillet on medium heat on stove top.  Melt Crisco into skillet up to 0.5" depth.
*      Place Crab Cakes onto hot skillet.  Once bottom is crispy and brown, gently flip over
*      Cook other side for approximately 3 minutes

Mix all ingredients together and let stand for 30 minutes


The state song of Maryland is in fact "Maryland, My Maryland" with lyrics set to the tune of "O Tannenbaum," just in case you thought you had heard the song somewhere else.  As with many state songs, it's a beautiful tune with rather creepy lyrics.  It was originally written as a rallying cry for Marylanders to rise up with the Confederacy and "spurn the Northern scum! (see last verse)"  It does beautifully capture the writers love of the state however his elegant prose are co-mingled with references to "warlike thrusts," "anointing throngs," and "crucifixion of the soul."  Come to think about it, it sounds like some scenes from the infield at the Preakness!  :)

And if you were wondering what was up with the strange state flag of Maryland it is a blend of the family crests of the Calvert and Baltimore families.

I do like a good horsey party! I watched the horses slog thought the mud, but I didn't get any crab cakes! Those looks delightful!