FFF - The Curl of Her

She puffed her cigarette with vacant satisfaction like I had seen so many times in others. 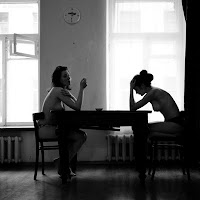 I laughed yesterday watching Up in Air when prowling 40-something vixen Alex stated “we’re no walk in the park either” referring to lesbianism.
Like Alex’s protégé looking for answers when text dumped by her boyfriend, I too was thinking maybe us women should stick together and leave guys behind.
So my first move in this new liberated life was to get a tattoo!
I walk by her shop every day.  I was turned on by her confidence as I watched her work above me as she inscribed that rose just below my belly and slightly above my pubic bone.  The curl of her spine was so erotic; she moved like a cat.
As we talked she became aware of my vulnerability.  She said she could close down early if I needed to talk.
Turns out I was just a quest for her.
In that movie Alex also says:
“We all fall for the prick. Pricks are spontaneous, they're unpredictable and they're fun. And then we're surprised when they turn out to be pricks.”
Turns out sometimes those pricks are attached to a female.

Posted by Ryan Beaumont at 9:39 AM

Hey hey, he's back! Haven't seen you in a while -- good to have you back with us again.

I wonder how many women get disgusted with stupid guy behavior and decide to try the fairer sex, only to find out that they can be just as prick-ish as the men can. We really need to work on taming the battle of the sexes down to a friendly roar.

Thanks for playing along! Happy FFF to you.

This really explains why they're free to be so leisurely in the middle of the day! Nice story :-)

I love your use of "curl of" and certainly a surprise ending.

No matter how good a tale you spun you deserve a spanking! You know why?

Yes I am sure a spanking is in order too! C'mon you'll love it ;)

But ouch, the ending! Original, I loved it.

Well done! Right on too with the fact that women can be 'pricks' too. Sometimes they are worse.... The more butch than thou types... gahhhh!