You're Dixie's Football Pride; Shake Down the Thunder from the Sky

Those lyrics are a combination of Alabama's and Notre Dame's fight song lyrics.  They are playing for the title so I thought they deserved the glory.  OK I'm going to try this again.  I failed miserably last year (see my thoughts) and my results.

What the hell am I talking about? I'm talking about college football, my favorite sport and handicapping the games based on which school has the best college girls, or cheerleaders, or any other analysis other than the usual "x's and o's."

Florida State has been a football power for the last 30 years.  But it's important to remember that it mostly grew out of the Florida State College for Women.  After WWII it started adding men due to the influx of GI's.  Soon after they began playing football.  By the 1980's they had gottten pretty damn good at football due to a guy named Bowden and they had evolved from FSCW to FSUFHC (Florida State University for Hot Chicks) as we see depicted to the right.

Northern Illinois University is located in DeKalb, a flat place awash in corn.

I see no contest here.  The mental image of half naked tanned cowgirls is much more pleasing than the image of women actual working with cows on some farm in Central Illinois.  FSU in a blowout here 34-17.

You know my football inclination says Stanford.  They are always a stong team and I like teams that are successful in a pro-style system.  They took Notre Dame to the wire and beat USC and Oregon (on the road).  Even though they are known for smart chicks, they actually do have a pretty hot student body.
Wisconsin?  Well historically you'd of just thunk cheese.  But then a little movie called Bridesmaids came out and turned our vision of Milwaukee from Lavern and Shirley to crazy women getting drunk a relieving themselves into the city storm drain.

I say it's a pick 'em.  But then I've got a real hard on for Kristen Wiig.  I'd definitely "do" her and she'd make me laugh while we were "doing it."  But remember UW is actually in Madison and Kristen does not actually live in Milwaukee (that was just her character).

Although the Badgers often come up big in the Rose Bowl, they have Barry Alverez coming back to coach the big game, and they hung 70 on the Huskers I have to stick with Stanford in a high scoring affair.  That means a lot of touchdowns not screwing drunk chicks from Milwaukee or smart chicks from the Silicon Valley!

However, Jennifer Connelly attended Stanford and she is my all-time favorite celebrity crush.  So even though she dropped out I'm taking Stanford (Reese Witherspoon apparently dropped out of Stanford as well).  I'm not holding it against them though!

You are thinking Florida vs. Louisville of course Ryan will pick the Gators.  But as my friend Lee Corso (who happened to coach at Louisville) would say "not so fast my friend!"  Florida is the #4 "Hottest Student Body" according to Popcrunch.com so you'd think this would be a beat down.  But surprisingly Louisville comes in #44 in the Top 50.  And if you have been to Gainsville, FL you'll know that it is really more Georgia than Florida. 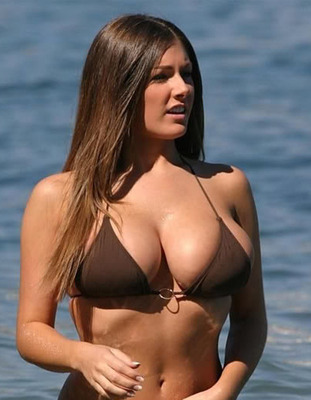 Thing is, Georgia girls are pretty damn hot too!

So you may say didn't Tim Tebow play for Florida - he really SUCKS!  And you'd be right but have you seen his girlfriend?  WOW!

Anyway, I never pick against the SEC in anything so I'll go with the Gators.

In case you didn't know Nike was the smokin' HOT Goddess of personal victory.  Now you might wonder what does that have to do with anything.  Well if you follow the minutia of athletics like me you know that Oregon for all practical purposes (in athletics) is really Nike State University (owing it's facilities and many gaudy uniforms to the vast wealth of Nike founder and former Oregon track coach Phil Knight).

I like Kansas State, I really do.  They play disciplined football and to give you a glimpse into the real geek behind Ryan I read a recent article that K State was the most efficient program in NCAA DI on a win per investment basis.

But I'm not picking stocks today and have you seen Oregon's cheerleaders?  DAMN!

Are you f'in kidding?  Tuscaloosa is the home of Dreamland and some pretty hot looking women!  Did you see any hot chicks in that movie Rudi?  I didn't think so.

Tide does some ass-kickin' and some rib eatin'!


You know all that football watchin' is great but you've got to do something in between those plays and during timeouts.  So if you want to have the best "non-game" action with some super fine "eye candy" you might want to check out what I'll call the Hot Chick Bowl.  Yes I believe there are 36 college bowl games now.  Many feature very forgettable line-ups such as Air Force vs Rice.  Bad teams and not much side line action.  Many games may not feature high scoring but are not of national prominence such as Tulsa vs. Iowa State.

But if you want to get the maximum "eye candy" exposure I would go down to Atlanta and catch that Chick-fil-A bowl.  The food should be good and those LSU and Clemson chicks combine for the best sideline action of all the bowls.

I take LSU and a touchdown and two of those Golden Girls and bowl of Gumbo!  :)

Hey I noticed that on PopCrunch's Hot Student Bodies 6 of the top 10 were from the SEC.  I always say Southern Girls are the best!

Email ThisBlogThis!Share to TwitterShare to FacebookShare to Pinterest
Labels: Sports

Ah Ryan! Good choice! The university of South Carolina is our local university, but Clemson is our family school. I always knew you had good taste. ;) Happy New Year to you!

I'll admit it. All the football talk made my eyes roll to the back of my head. Thank God for the pictures! LOL

I hope you have a wonderful 2013, Ryan. You deserve it. You're one of the good guys.