If you believe in that Darwin guy everything seems to evolve.  Blogs evolve, even one as doppie as this.  I signed onto Ashley Madison back in April, 2010.  I came across Riff Dog's blog about a month later.  From June, 2010 to the end of the year I began my first three adventures with Alecia, Sandra, and Keeley.

By fall of 2010 I had decided I wanted to create a blog.  My first thought was to try to be an East Coast version of Riff Dog.  I would tell my tales sequentially and label them by the lady and that would be that.  Of course as time went on I took stabs at other things.  I felt compelled to tell a little about my marriage, I inevitably poked fun at Riff, and I eventually started writing food posts.  Thus, even this blog began to evolve almost immediately.

My third post was about a trip to the Caribbean.  As I was thinking about a title I heard that James Taylor song, "Mexico," in my head.  So I used that as my title.  When I decided to write about my experiences leading up to signing onto Ashley Madison I decided to tell the tale of my friendship with Renee and my participation in a local production of the Nutcracker.  I originally was going to use the name Rachel for my friend but then I heard that song "Just Walk Away Renee" and it stuck for me.  It's a song about unrequited love and I had always felt a connection to the song.  Soon I was writing about my discovery of Riff Dog and of course that song by the Baha Men "Who Let the Dogs Out" was just perfect.  Before I knew it I had evolved into using song lyrics for my blog post titles; and so it went from there.

﻿Btw, I still run into Renee occasionally at the gym.  She is doing great in life and she still looks hot!  Sometimes I think that there is an alternative universe where we are together; we would be great together.


﻿
Of course all of this really doesn't mean much except for that concept of evolution which is sort of my point for the day.  As this blog has/is evolve(d)(ing) you may have noticed I don't write so much about Ashley Madison anymore.  It's because I really don't go there much anymore.  But if that is the purpose of your blog and you don't do it anymore, it kind of puts a plug on new stories at some point.  It kind of makes me think of Rush Limbaugh, what does that poor guy do when we start running out of old angry white guys in this country; he'll be out of a job!

And so I finally come to my point, sort of.  Today I am doing a repeat of one of my blog posts from 2010.  Going forward each month I will re-post a post from 2011 and 2012.  New readers my not have ventured back that far and for old readers I'll try to do some liner notes so to speak to make it worth your while.  I have to say I've been gearing down a bit of late.  I've put myself on a 10 post/month diet and may ratchet down from that after February - we'll see.

Anyway, it's all part of evolution you know.  Of course none of this means anything if the world does in fact end later this month.  I'm sure I'll have a little to say about that before we get there.

For now though I have "copied and pasted" the post about my first meeting with my first Ashley Madison lady, Alecia.  It kind of started a trend where I do a quick paragraph on why I am choosing that lyric and perhaps any past connections to the song and then I segue back to my purpose for the day.  I have to admit I enjoy being a bit of the eccentric.  Really it's more that I enjoy being like a baseball player (such as Yogi Berra) who never seems to make much sense while they are talking but every once in a while seems to come up with something slightly relevant by the end.  IDK, I think I've lost myself now.

Anyway, true real recent story.  Just the other day a client comes up to me and says "I met someone you know."  I smile and say "oh really, who would that be" not really giving a damn since I am such an aloof fellow.  He then says "you know Alecia ********, right; she told me to tell you hi."  I think for a second. I have no idea who he is talking about, and then I realize who he is talking about.  I guess that is why we only had sex twice; it's tough to have a *uck-buddy in a small town.  It sure would have been nice if she could have told me "hi" back in summer, 2010 rather than just never calling or e-mailing ever again!  But hopefully that means she remembers me well and with a smile.

So here is that post (man, nothing reminds me of high school nights like a little of the grand old Van Halen: 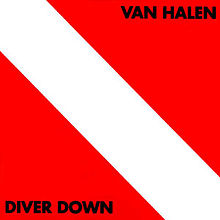 from December 21, 2010...
Everyone likes a little old Van Halen, right? To put me on a timeline my first big concert out with the guys and no adult supervision was on the Van Halen 1984 tour. I think it was about 4 or 5 of us and we had a case of Old Milwaukee. Unfortunately for me we ate at Wendy’s before drinking and I was stuffed and I just wasn’t able to drink fast enough to get drunk before the concert which was perturbing me. So I “shotgunned” a beer to expedite and then promptly regurgitated my Wendy’s double cheeseburger just outside the car door (of course it may have been the “Old ‘swill”). Oh well, the concert was great and at least I was able to be safe driver going home. And, in hindsight, I’m glad I got to see them before they turned into Van Hagar (although 5150 is a great album in its own right). Sorry, that memory probably doesn’t go well with this blog entry but so what this is my story.

So I drive over to Alecia’s office and ask for her at the front desk. Alecia told me before that the receptionist will just think I am a business contact, I am in business attire so everything should be OK and it is close to the end of the day anyway. In fact in her message she said we are all “tanked out” meaning jeans and tank tops – this may be interesting. So I wait a few minutes nervously looking at some pamphlets. Finally I hear a somewhat familiar voice coming down the hall. And around the corner is Alecia. Yep, I can safely check “looks better in person,” on her AM profile if I were that type of guy (I don’t leave checks on AM btw, I like to keep things to myself good or bad). Alecia is in a cute burgundy tank top which reveals her fantastic tan and beautiful long toned arms. She has long strait brunette hair just parted to the side. She has a fairly big, dangly, and somewhat “earthy and native-American’ish” silver necklace. She is wearing very tight, straight leg jeans (my daughter calls them skinny jeans), and elegant black high heel sandals. And, as I said, her face has that tough but very attractive Pink (the singer) look. I also quickly note, little make-up, just naturally attractive. I let her walk a bit ahead as we go back to her office and she looks FANTASTIC. A side note, we don’t often recognize how important shoulders are in appearance. To get that great female silhouette and for cloths to “hang well” straight, well toned, and long shoulders (equal to hips) are a big plus. I am definitely a leg man, but shoulders are important.

So we sit in Alecia’s office and talk for about 30 minutes. She tells me more about her work and her family and her home. She lives in a big house on about 40 acres on land her husband’s family owns. She has a pool and a lot of ATV trails. She is sounding very cool. Apparently her husband is pretty selfish, absent, and career driven. Let me also pick back up with her career. She is more of an occupational therapist/job and life skills coach, working with the mentally and physically disabled on life skills and placing them into training and job opportunities as well as organizing transportation to job sites. So by now I am not as psyched-out. She takes a call while we are talking and one of her staff sticks there head in the door and it is very comforting to see her interact with others, she is very confident and candid but also very warm and caring. She then takes me on a tour of her office. There are a lot of rooms for training, skills assessment, etc. We actually make a connection here because I have done some non-profit work in this life skills area. I think she really enjoyed talking about and showing off her work to someone who was interested.

Things finish well and she walks me to my car. She had already given me her business card and cell phone number and said she would be in the car tomorrow traveling with some time to talk. So we have a 9 am cell phone date for tomorrow. She gets ahead of that always awkward ending by saying she would kiss me but it was not a good place, she says “we’ll have to save that for later.” I watch her as she walks away, she has a great walk! After about 10 paces she turns back to me and smiles and waves. Wow, she is really cool, I am liking this!

When I get back to my office I have the following note in my inbox:

“wanted to share I completely enjoyed meeting you R.. I found you extremely handsome..articulate.. And.. You left me with the desire to want to learn more.. I hope I left you feeling the same.. Im glad the initial meeting is out of the way.. Now if we choose we can focus on the journey.. What were your thoughts driving home”? Are you smiling

So I guess she likes me as well.

The next day we do talk on the phone for about 30 minutes. Again, the conversation is very natural. She really does most of the talking. She has a meeting at her daughter’s school that afternoon and a lot of soccer and baseball is coming up. Again, I really actually enjoy listening more than talking. We make tentative plans to go to lunch the next week. Over the next few days she texts me (I e-mail back) often. She says it’s like a scene from the movie “You’ve Got Mail.” Being cute I write her a note and address it to Meg. Later I get this angry e-mail saying

“you called me meg, im not meg…. I hope you and meg find what you are looking for….

Fortunately, I get the following text before I read the above text:

Dear Tom, OMG.. I am so very sorry...LOLLOL.. Im incrediblly exhausted from my work day.. It took me an hour to figure out who Meg was... LOLLOL.. I went outside to sit by the pool and WHAM.. It hit me.. Im Meg... Hopefully youre laughing as much as I am right now..

So the following Tuesday we have our first date.

Posted by Ryan Beaumont at 8:25 AM