Ryan's Duets - In the Beauty of the Lilies

Christ was born across the sea.
With a glory in his bosom that transfigures you and me;
As he died to make men holy, let us die to make men free
While God is marching on.
Ryan's Thoughts, Reflections, and the Best of Gettysburg
For additional thoughts on today please also visit Max at Thoughts from a Mystic Satyr and Shoes at Red Shoe's Chronicles.  Max will be further discussing Gettysburg and Shoes will be talking about the siege of Vicksburg that ended on July 4th, 1863.﻿


Check here and here for some interesting new research and perspective on the battle.﻿

Today is the 150th anniversary of the culmination of the epic 3 day battle that changed the course of America's greatest challenge and helped forge the nation we would become.  In the pristine hills of South Central Pennsylvania 160,000 young men fought and nearly 8,000 died to protect their ideals.  The area today is picturesque and massive in scope.  It's hard to comprehend the vastness of the battle and the hell those men endured on those fateful days.

However, as I am wont to do so often, I enjoy the small and subtle story lines that drive the outcome of the plot.

Early on day 1 a savvy cavalry officer, John Buford, realized the strategic importance of the topography and chose to dismount and fight at great odds against the Confederates emerging from the West.  The engagement was folly but the precious hours bought allowed the Union 1st Corps to emerge and deploy west of the town to further obstruct the progress of that Confederate line.  The general of that corps (John Reynolds, perhaps the Union's best corps commander) would die from wounds received while valiantly directing infantry and artillery.  But fate would be for and against the Union over the next few hours.  A Major General Doubleday would take Reynold's place and hold the line for another few hours.  That Doubleday would go on to greater fame in another field later in life.  The Union line was bolstered by the presents of it's most famous Iron Brigade of hearty Mid-West boys.  But even the Iron Brigade could not hold when boys from North Carolina flanked them.  By the evening the Union had to retreat to ground south of the town.  But the day's action cost the Confederacy dearly in men and time.  The town they won was meaningless against the hills they now looked at to the east and south.  The time won by the Union's vanguard of Buford, Reynolds, Doubleday, and those Iron Brigade men from Indiana and Wisconsin meant that the bulk of the Union army could arrive and deploy overnight along the precious protected high ground overlooking the angelic fields to the southwest of town.  Upon the ground they had just recently won so dearly on Seminary Ridge the Confederates could only look east to Cemetery Ridge and know the hell they would pay the next day.  That first day of action showed that the minutes you give mean something and the interest earned pays in ways you may not know of at the time; but it does mean something.  Little things do matter.

The massive collision of armies on the second day of the battle is beyond the scope of anything that had or probably ever will occur on the North American continent.  The Confederates on the Union left fought bravely and at great cost in actions that transformed beautiful places like a "Peach Orchard" and a "Wheat Field" to "Devil's Den" and "Slaughter Pens."  And yet by the end of the day the Union had refused the line and at the extreme end of the line the battle came down to boys from Alabama charging up a hill at boys from Maine.  Those boys from Maine fought out and tired and out of ammunition finally fixed bayonets and at horrific odds (nearly 2:1) staged a heroic oblique charge down the hill sweeping away the remaining Confederates and shoring up the Union left and preserving the day.  Amid the 160,000 troops engaged a mere 1,000 men from Maine and Alabama determined the fate of the battle on that second day.  Actions like those on Little Round Top show the meaning of the power of 1 and that small things matter in the great scope of life. 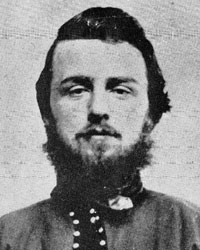 And yet life is a collection of irony.  Private Wesley Culp had grown up in that small Pennsylvania town.  Young Wesley apprenticed and learned to make harnesses for horses.  When his employer moved to Virginia so did young Wesley.  At the outbreak of the war Wesley joined his friends in what would become the famed "Stonewall Brigade."  By July, 1863 Wesley was a veteran of many of the great battles of the Eastern Theatre of the War (1st and 2nd Manassas, Fredricksburg, Chancelorsville, and the famous Valley Campaign that forged the indelible image of that famed "Stonewall Brigade").  On the fateful 3rd day of the battle, Wesley Culp and the men of the 2nd Virginia looked up at the hill named after Wesley's paternal uncle.  Wesley and his regiment charged bravely up the hill but Wesley would not make it to the top dieing from his wounds near his family's farm.

To the south of that Culp's Hill engagement the center of the Confederate line 12,500 strong gave one last heroic, yet fateful charge.  Their goal a small "copse of trees."  While a few from Gen. Lewis Armistead's Brigade made it to and briefly broke through the Union lines, they were quickly thwarted and beaten back.   Gen. Armistead was killed in that attack, ironically in front of and quite close to troops commanded by his dear pre-war friend Gen. Winfield Scott Hancock.


I don't know what the life lesson is gained from Young Wesley or Gen. Armistead is, perhaps it's that you really can't go back home.  That's probably not the case, perhaps it's that you never know where life will lead you and amid the massive universe the paradox is that you never know.  So I guess you need to make sure you are living for the little things in life that make it worthwhile.

Speaking of little things it wouldn't be my blog if I didn't comment on travel or cuisine (no, today's post is not about hooking up with Civil War MILFs).  Although Belle Boyd to the left was quite the little Confederate seductress, bedding many a Yank for a bit of stratgic information!  So since Gettysburg is a place I truly enjoy let me speak about a few out of the way places you might look for if you care to travel to this wonderful place!


That being said while the battlefield and the central town square are beautiful don't be surprised if you are traveling north along the Emmitsburg or Baltimore Pikes and feel you are traveling through the Jersey Shore of Civil War sites!  One minute you will be looking to your right and see the focal point of Pickett's Charge and then a half mile later you will pass Pop's Battlefield Fries and Ghost Tours.  It's both funny and a guess a bit sad but that is what the selling of history and the commercialization of Gettysburg has become.  But look around and you can find some wonderful spots.

Ryan's Favorite Battlefield Stop (Devil's Den) - If the kids are getting antsy Devil's Den is like a natural playground and they will love climbing all over the rock outcropping.  Although I caution you there are some steep drops if you are not careful.  From Devil's Den you can look up toward Little Round Top.  One of the best known ghost stories is that of the Confederate soldier depicted in Alexander Gardner's famous photo "Confederate Sharpshooter."  Later analysis revealed that the photo was staged and the soldier was moved to the site by the photographic crew (about 40 yards south of the site).  Urban ledgend has it that the Confederate soldier (angered by that indignity) haunts this place.

Ryan's Favorite Restaurant (Dobbin House Tavern) - After a hot day on the battlefield nothing is better than cooling off in the Springhouse Tavern in the basement of the Dobbin House Inn.  It is as if you are stepping back in time as you walk down the staircase into the natural coolness created from the spring.  They have a great selection of sandwiches and all are good.  A must however is the "King's Onion Soup."  This is the best Onion (King rather than French) Soup I have ever tasted.  You must finish with the Colonial Gingerbread with Lemon Sauce.  Before you leave check out the Underground Railroad Museum at the Inn.

Alternate Places Nearby (Emittsburg/Thurmont, MD) - About 20 minutes south of Gettysburg is a wonderful area full of outdoor activities and history.  The Grotto of Lourdes on the campus of Mt. Saint Mary's University is beautiful and tranquil.  It is a replica of it's namesake shrine in France.  If the kiddies are tired of history and tranquility they will love the Catoctin Zoo close by.  The zoo is small and intimate and gives you a much better way to get near exotic animals in a way you can't do at the DC zoo.  Given the elevation it is also not a flaming cauldron of Hell like the DC Zoo in the summer!  If you need something to eat at the end of the day I'd suggest the crab cakes at the Shamrock  Diner also close by.  If you are feeling real adventurous you might just take a little detour to the west of Thurmont  along State Route 77 and see if Barack and Michelle are taking the weekend off at Camp David, I hear they have great Skeet Shooting up there!


As you reflect on the battle and it's meaning take a listen to Johnny Cash's version of the Battle Hymn of the Republic.
I heard once that if God has a voice it's likely to sound like Johnny Cash to human ears.  I believe that!

Beautiful post. As you say, there are so many small and interesting stories that had a very real effect on the outcome.

You're right that Gettysburg and the surrounding area are still very pretty. Yes, there are outlet malls, and yes, there are plenty of schlocky souvenir shops - but much of the terrain is still untouched and very beautiful. It's a worthwhile destination for anyone with an interest in history - or, with the cozy little B&B's, for anyone interested in a romantic getaway. :-)

The best book I've ever read on this is "Killer Angels". I highly recommend it, and though every chapter moves to a different character, it is brilliant. Written by a history teacher, and the only one that he wrote, it takes letters and historical accounts and pieces together such a compelling story.
Thank you for sharing, this was great.

What a wonderful post!!!
I SO want to get to Gettysburg!!!

Such bravery... such gallantry... such a huge waste of human life and limbs...

Happy 4th Ryan! I adore how you weave the threads of your interests together into this beautiful tapestry of a post! It felt like just the right thing to be reading today! And thanks for getting the other guys to chime. Wow.

I won the American History medal for the best grade in that course in high school, but was more of a Revolutionary War buff, based on where I lived and true cause of throwing off royal overloads. Have you visited Lexington and Concord? Come on up!