Ryan's Repeats - It's So Funny, Why We Don't Talk Anymore

Wow, has it really been a whole year since that last election?  Time does fly.  Here is my last year's election coverage.  I know it's an off year for most of you but politics was pretty big around here with two Gubernatorial elections in our region.  The big thing decided?  Nothing!  Christie won big in Snooki-land but perhaps not a Presidential road paving landslide (and of course he had to duck the coat-tails of Cory Booker to do so).  In Virginia the Democrats won in a historic election (first time the same party in the White House won the Virginia Gubernatorial election in over 20 years) but not by so much as to dissuade the Tea Party from feeling they could have won if not for the presence of a 3rd party candidate and lack of National support.  I can just here them now, if the Rino's would have just helped Ted Cruz and the Cuch a little more yada, yada....  So what can we look for in the next year as we await those mid-term elections in 2014?  Yep, more of the same no doubt.

As an aside I mentioned a few weeks ago that Kat's Chain during the month of November was in some sense a "last hurrah."  Looking back into last November I have to say "egoistically" that there is some good stuff (if I do say so myself).

Here is a link to my entry into Kat's November Blog Chain.  It's so long I don't think I can cut and paste that much!  But read it if you dare.  It's political satire - Ryan Style!

I also had a funny little post, I think, about Octomom (how can you not enjoy spoofing her)!  And I even had a fairly nice Sandee post about spending time with her at one of our favorite river "spots."

Yeah, as I think about it last November was pretty fun writing about all the stuff I had recently done or thought about.  But I have to say the energy it took to come up with all that "stuff (junk/crap)" took some wind out of my sails so to speak.  I got through December but soon after the start of 2013 I finally decided to decelerate.  You see up to November everything about blogging had always been fun; something I looked forward to.  December had enough stuff like holiday cookie posts and a Christmas tale (that I wanted to become an annual project) to be interesting.  But at this point I already knew that it was time to slow down or the blog would become a chore I no longer relished.  I was asking myself "who is Ryan Beaumont?"  He had been a pretty prolific blog writer for some time but perhaps it was time to go a little more reflective going forward and yes slow down.

Anyway, at this juncture (back in 2012) I decided to take some time and discuss relationships, or at least relationships as I see them based on my past experience.  All too often as we navigate our relationships we continue to be like last week's election - a lot of press but in the end not much decided.  As Einstein once said "the definition of insainity is doing the same thing over and over again and expecting a different result."

God help us we keep doing that at the voting booth and as I reflect we do it all too often in our relationships! 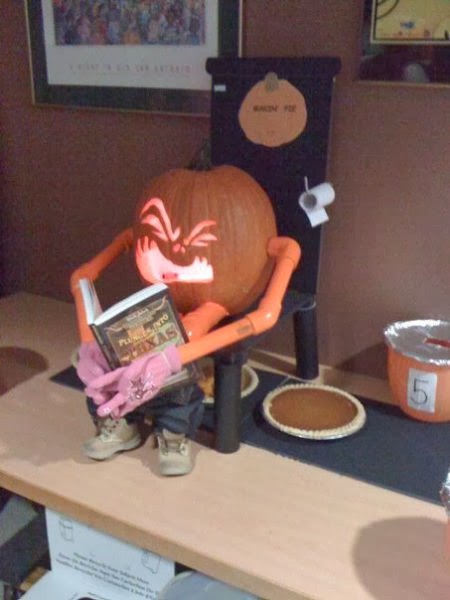 It's Thanksgiving tomorrow so time to think about the 3 F's to Thanksgiving. No that is not an invitation to do an FFF this week, although you should - Advisor has been working hard at keeping that alive no thanks to me. No to me the 3 F's of Thanksgiving are Food, Family, and Football (not necessarily in that order). I'm not really in the mood for a food post today so I will leave you with a link to my Thanksgiving food post last year HERE, and my famous Pumpkin Pie recipe to the right. -------------> :)

So let me move onto Family or rather relationships or really relationships with your spouse. Well, I'll probably digress first with a sport analogy so that I can work in the other F (football) which is of course the most important of all those F's. So because I care so much for "you" I'll have worked in all the "F"'s for "U's" by the end. Btw, thinking about football tomorrow "GO Redskins, "FU" Dallas!" :)

But let me digress for a moment and mention something a little deeper about myself that will help my point. After all many I come into contact with in my real life know that I'm nothing without a good sports analogy. In my business I interact with athletics often. Over the years I have seen teams go through pre-game meetings, meals, and warm-ups. I have read about teams the talking heads favored yet seen defeat in their eyes as they got ready to take the field. I have seen winless teams for some reason find the gumption and determination to excel and finally win a game. I have seen teams know exactly what they needed to do to execute a game plan that will exploit an opponent's weakness and then go out there and do it and it was beautiful. Talent will keep you in games but winning often just comes down to diligence, motivation, and desire. Yes, sometimes it really does come down to who "wants it" more. Or as is my point for today, "who is cheering for one another."

I've been thinking about this post really for almost 5 years because it's a topic I discussed so many years ago in a marriage counselors office. Really it was a question I posed. That question is:


Are you rooting for your spouse?
Well really I was bitching to the therapist and saying that I didn't think Shannon was rooting for me.
So after that really big intro- what a silly little question. But much like that sports analogy you can have the best quarterback in the world, you can have a screen pass called on a maximum blitz, but if you don't execute it's all for naught. And execution often comes down to that diligence, motivation, and desire.
So I ask again: "are you rooting for your spouse?"
Now let me 'splain.
Think of those words diligence, motivation, and desire. Don't they sound like nouns you'd like to apply to your marriage or any relationship.

Motivation - The general desire or willingness of someone to do something

Desire - A strong feeling of wanting to have something

Now jump back to football. I'll give you sneak peak of my December Blog Chain post for Kat. It involves a big football game, the Big Easy, and the holidays. My team, Big State U, was playing in a big-time bowl game in the Big Easy many years ago. I got tickets because I wanted to see BSU on that national spot-light and of course I wanted to be with Shannon in the Big Easy. It was hard to get tickets, this was way before EBay and StubHub. But I found them and we decided to go.

Think how hard I worked to get those tickets to see Big State U in NOLA. Think how much I wanted to see them. Think of the strong feeling of pride I had when Big State took the field and our fans cheered. I was cheering for my team with pride as well as diligence, motivation, and desire. In that game BSU got down early but we still cheered. We were just proud that we were there no matter the score on the board. Luckily, BSU caught fire late and clawed their way back into the game. BSU pulled ahead early in the 4th quarter on an electrifying punt return and ended up winning.

OK so now back to that family F and spouses.


What I was trying to communicate to that therapist and to Shannon is that I felt she was not cheering for me. She had wishes for a better marriage but did she really want me to be the one to provide those and win her over. Perhaps it was easier to pigeon hole me into a certain category of disdain and then not have to worry about when the marriage was better and thus be ready to have a more intimate relationship. Sometimes we just get comfortable with the distance.﻿

Of course sometimes we do in fact have to move on in life. When you stop cheering you have stopped hoping.

Of course the answer (right) is that too often marriages are a one BIG damn game and it's that very fact that makes them a challenge! :)

And of course you are asking "Ryan can I get the last 10 minutes of my life back because you wrote this big long piece of written diarhea just to ask a silly stinkin' question!" :)

And so for a silly stupid post here is a silly song performed by England's (supposed) answer to Elvis!