Too Much Time on My Hands

So this event happened to me about two months ago but as I think about the oncoming "Black Friday" shop-o-gasm next week I pause to speak a little about places no man should go no matter how adventurous.  You see I consider myself well traveled visiting New York, Chicago, Atlanta, San Francisco, LA, even out of the way places such as Opelika, Alabama and Olatha, Kansas.  As with many professional men I have a certain air of confidence that I control my destiny and whichever environment I traverse.

However, as I recently found out one should think about their adventures before they undertake them well considering their preparedness as well as the necessity of said adventure.  One never wants to charge up the Himalayas without a good coat or travel down the Amazon without bug spray.

And so it was one Thursday afternoon as my car was in the shop that I found myself in a foreign land.  A land so bleak and yet simultaneously so dense it dwarfed the vastness of the Mojave Desert and the blinding infinity of wildness of the Rainforest.

What horrific land is this that I describe?  It is in fact a foreign land that no professional male should ever see or seek.  It was in fact the mall at 2 pm on a rainy Thursday.  For as I found that bleak day a suburban mall is no place for professional man.  In fact my very presence disturbed that delicate balance of the eco-system.  Of course I roamed the isles of the JC Penny's in total innocence simply seeking a pair of sports briefs for the gym.  But I may as well have been a ferocious Lion stalking through the Savannah as females craned their necks in shock to get a glimpse of this rare creature as if they were Meerkats trying to figure out why a strange beast had invaded their manor and should they be leery!

The funny thing is that I was as scared as the inhabitants of this place.  I thought to myself, men's apparel is to the right but what if I take a wrong turn at cosmetics and and get caught in women's lingerie?  Will they think I am just some dirty old man out for a cheap whack-off on his coffee break?  Oh my?

Fortunately Madison, a brave and confident young 20-something female associate, eagerly encountered me; obviously perceiving my weakened state.  She offered "can I help you find something sir (with a cute smile)?"

OMG, I think..., those tits are so young and perky I can see them now bouncing up and down upon my face as she maneuvers over me.  Yes this is surely a lead into a proposition.  However, my reply is a mild "where is your sportswear."  She smiles and says "let me show you."

Ah see, what is actually lovely about being a male in a store is that the hunter becomes the hunted and cute young females know a professional man is an easy target for an up-sale! 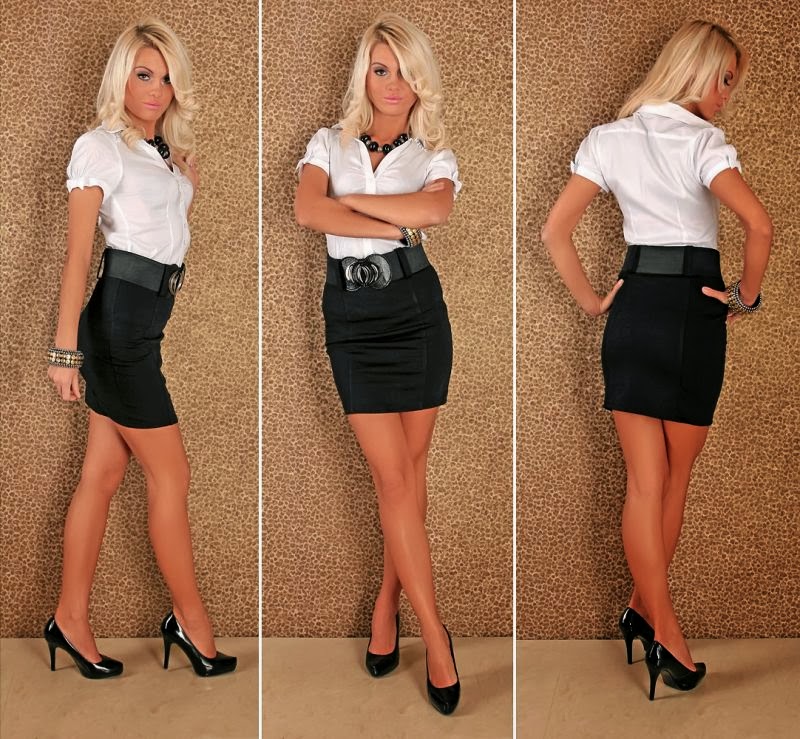 A few minutes later I return to the counter patiently waiting behind some old guy who has not grasped the concept of on-line checking and has actually driven to the JC Penny's to pay for his JC Penny's card in person with one of those old school paper checks.  I could have walked a few feet to Grandma (in her retirement job) who was only folding shirts at the cash register counter.  But no, I wanted another one of those 20-something smiles from my friendly female tour guide.  Just before my turn in line I see a tie just in the style I've been looking for, I grab it; it's needed and who want to just walk up to the register with two packs of undergarments.  Ms. 20-something sales associates smiles and says "I love this tie, it's going to look great on you; you know we have a sale.... buy 2 get the 3 one free."  Like a zombie I immediately go to the counter tie rack and pick out two more as if she had suggested I go to the back for a blow job.  See this is why female salewomen love men!  I even hold one tie up to see if she approves, and she coos with approval - sale closed.  She rings me up and I throw in 3 impulse purchase Godiva chocolate bars for good measure.  She laughs and says, "hungry are you?"  I let slip and say they are for my daughters.  She replies "awwwww, that's sweet."  Probably not the best line for a blow job but the look in her eye was enough for me to think I could have scored if I wanted to or were 20 years younger.  Anyway, necessary purchases made and ego stroked so all things considered a successful trip.

I then decide to take a scary adventure to the mall food court.  Along the way I see all forms of Geriatric walking gangs, goth slackers, and super stroller-buddy mommies (some I think pre-ordained to be future AM customers).  All things you don't realize exist when you work for a living.  But wait (head twists quickly) behold in yonder window draped in silky pink stringy thingys.....

Somewhere along the path I walk past the ultimate male danger zone that is Victoria's Secret.  This of course is a false Heaven.  The place looks so inviting, the exact place where a man would wish to be but what key doth unlock this Heaven.  Can a man simply go inside and peruse the scantily clad models pictured on the wall and imagine the thong up the crack of that manikin is affixed to the beautiful round ass of that hot sales-girl behind the counter?  I bet not.  What story will yield validity to a Victoria's Secret expedition?  Panties for my daughter? SPOOKY!!!  Bra for my mother?  CREEPY!!!  Teddy for my wife?  BONG! That ain't going to get you into Chelsie's (the hot sales girl with the beautiful round ass) "Juicy" thong!  No this is a paradox; a black hole of temptation where paradise is never quite found!  Best move on and turn away from the false light.

Now ladies this is not an article of misogyny.  Yes there were men present, several.  Some were even in their 20's but they were of a different species of male.

Let's take a look at some of these Suburban Mall male specimen:

*  Fleece-wrapped Septuagenarian Slow Walker - This might be Ryan in 40 years (not).  This male shuffles along slowly behind  his female mate thinking about his next opportunity to pee and what's for dinner (and maybe the weather).  He is dressed in blue slip on velour looking shoes, relaxed fit sweat pants, and either a flannel shirt or pull over sweater that says "PaPaw," "Dollywood," or "Gatlinburg, TN."

*  Pale Skinned Ringed Goth Slacker - This person, when not in his room at mom's house playing War Craft or Grand Theft Auto, is lurking around the Game Spot looking for new versions of War Craft and Grand Theft Auto.  They only have a limited connection to reality as most of their time is spent running from the Po Po in Los Santos (their alternate real world).  They have pale skin and wooly hair or is that just the stocking cap that has been worn so long it has molded to their brain.  They tend to wear black and maintain an intricate heavy industrial chaining mechanism between their belt buckle and pocket.  If they have any equity it would be in Doc Martin's stock or simply the mulititude of Doc Martin shoes they own.

*  Skinny Jeaned Sideburned Electronic Hipster - This is the closest species to Ryan.  He actually dresses well, quite well actually with skinny jeans, a skinny Banana Republic Euro looking sweater, sleak slip-on Italian looking shoes, and he may actually have on a tie.  He is probably wearing glasses and has that brush up hair-do.  All Skinny Jeaned Electronic Hipsters work at the mall cell phone kiosk - they have formed a trade union.  If you need to sink, link, or upload anything or get an app for anything they know how to do it.

*  Faux LeBron Honky NBA Wanna Be - At the risk of being non-PC this is the white guy with a goatee, scraggly side burns, a LA Laker hat on side-ways with a LeBron James jersey on top of a Celtics long-sleeved tee shirt.  The LeBron Jersey hangs down over his Pabst Blue Ribbon signature gut and down to his knees almost covering his jeans that are a 52" waist about his 48" body.  The jeans cover the approximate area between half his ass (showing off his LA Clippers boxers) and somewhere between his knees and his ankles.  He has multiple tattoos about his neck, arms, and ankles including all Chinese zodiac animals and some fung shei sign thing that must signify the balance between wearing someone else's jersey and the extreme personal slackerdom.  He has on high top sneakers of course.  You wonder how he can afford all that apparel or why he is even wearing it as his 5'4" stature means he has never actually played basketball before.  Makes me remember how rad I looked back in the day with ankle sox in black high tops and bike shorts hanging out under my gym shorts!  Aw Ryan what a memory!

Note:  Hey did you know that Hall of Fame Pittsburg Steeler's QB Terry Bradshaw was actually the back-up to that Duck Dynasty guy at Louisiana Tech!  Yep, there is no end to the stupid facts Ryan knows!  :)

OH well, all in all not a bad day.  I did get my sports briefs, 3 cool new ties, had a moderately satisfying mall food court lunch, discovered new territory, met fascinating people I did not know existed, delighted my daughters with chocolate, and for once the car was under warranty so I didn't have to take out a 2nd mortgage for a tire rotation and balance!

But I ain't going back to the mall anytime soon.  Surely some female out there is willing to bear that cross for me and dress me how she feels fit in the appropriate Banana Republic attire.  When dressed properly I do make a great accessory for a lady!

Fun post, Ryan! I loved it. But what do you have against grandmas?

A well told tale. I love Victorias Secret. The key is to wear your wedding ring but go in shopping for your "friend's birthday." It doesn't make you as the creepy cheater, but shows you have money and taste and a bit of daring. Works for me. LOL

Hilarious. I think I was at this "mall" place once, but the ladies in my house pronounced me such an impossible shopper that I've never been allowed back. :-)

Ah Ryan...welcome to my native land..the mall. :) Yes, we are a strange bunch of inhabitants.