Juliet When We Made Love You Used to Cry

You know when you mess around on AM and worse yet you start to blog about it you can get a little jaded about love and relationships.  But I am the eternal optimist.  In my life I have seen that while humans have a limitless ability to do mean and stupid things, they also can do the most amazing things that just send your heart aflutter!

OK, you're right, I'm going to talk about sports!

I love this time of year, perhaps even more than bowl games.  This is the time of year for those epoch state rivalry games.  I like them even better than bowl games because at bowl games everybody is happy to be there and even if your team loses hopefully you had the chance to get drunk and laid in New Orleans or Miami or well Shreveport for that matter (who cares you got drunk and laid)!  However, in contrast those end of the year rivalry games offer joy, hate, glory, triumph, and perhaps even redemption all wrapped up into one.  When redemption and glory are on the line, well, you know a game means something.  For example Big State U plays our big state rival this week.  Even though our rival truly sucks I still will watch and hopefully enjoy BSU doling out another generous helping of butt kickage because BSU's rival is such a bunch of snotty pricks.  For me and Big State U fans the game offers an annual dose of pleasure at seeing the bad guys suffer.  However, on the slim chance Big State looses our pretentious snotty rivals will gain a good dose of redemption though they have suffered through a miserable year.  Wouldn't life be great if you could always have a chance at redemption at the end and right all the wrong that had gone on over the past year.

But as I have learned over the year's growing up in the South one state rivalry trumps them all.  This one state lives and breaths football as much as any other but no state has had two teams as competitive over the years as the state of Alabama.  Between the two schools they have won the past four National Championships.  And for that reason the annual Iron Bowl between Auburn and Alabama is the measuring stick for all hate filled state rivalries.  Heck, an Alabama fan actually tried to poison the historic trees on the campus of Auburn University a few years ago.  Now that ain't tree huggin', that's pure old fashioned home cooked hate!

And it is that game that is the background of a true LOVE STORY.

Wait?  Hold on a second!  What happened to the sports?  Psyche, I am talking about lovey dovey stuff - I just sucked you in on the sports!  :)

See this year's Auburn-Alabama game offers the ultimate Romeo and Juliet.  Yet the fact that this love has lasted is even more uplifting than that ancient Shakespearean tail. 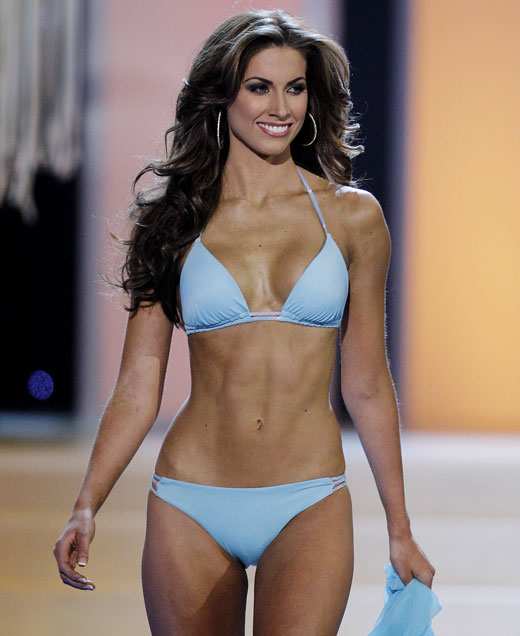 You see Katherine Webb, that viral star beauty who conquered Sports Illustrated, reality TV diving competitions and gave Brent Musburger a woody on national TV is in fact an Auburn graduate and her boyfriend is the QB at Alabama.

Now I suppose it's not so unusual to date a guy from a rival school and her boyfriend A.J. McCarron is (I guess) a cute guy to be sure and likely to be the recipient of an NFL contract next spring.  But let me tell you something, that's a Tom Brady body above there buddy!  And A.J. ain't Tom Brady yet. 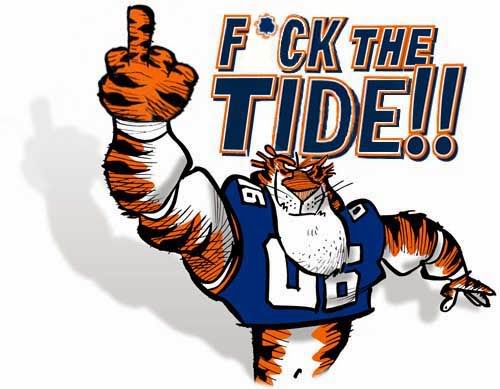 Ms. Webb could have had about any guy she wanted over the past year.  And by that I mean guys of the Tom Brady/Brad Pitt caliber.

You see Juliet was a sweet girl and her love of Romeo was timeless.  But let's face it Romeo was the fer shizzel in Verona and his family was loaded.  Juliet didn't have the option of hooking up with an NBA star or signing onto a movie deal with some glitzy director/producer. 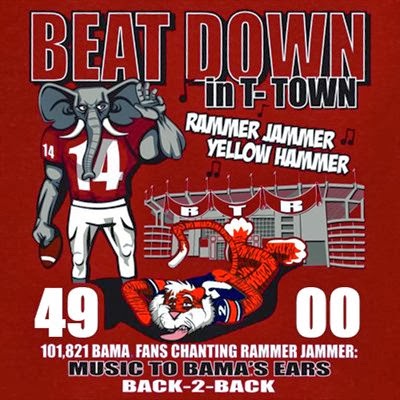 Which gets me back to the fact that I find it mildly sweet, in even my jaded heart full of spiders, that Ms. Webb still adores her 'bama QB.  In spite of all she could have she stays true to her college beau.  I nearly shed a tear when I read this article about her fears at attending this year's Iron Bowl.

OMG, that hot and willing to forgo the attentions of the rich and famous and willing to face down her Capulet family from Auburn and maintain her star-cross love affair with her Crimson Tided Romeo Montague from U of Alabama.  I am truly touched.

It's times like this that I realize us idiot guys really don't deserve the love of a good women, but thank God we get it sometimes!

Now let's away yonder past Tuscaloosa's McFarland Blvd to Dreamland BBQ or to Toomer's Corner and hug it out!  And for the love of God decide what to call yourselves Crimson Tide, Tigers, Elephants, Eagles you know this split personality thing is never good for any relationship!

That being said based on my deep analytical game analysis, the Tide has too many cool names on their roster including Ha Ha Clinton-Dix, Vinnie Sunseri, and Deion Belue to lose.  But that 10.5 point spread is a bit high.  The Tigers beat Johnny Football in College Station and the Tide struggled with that high powered A&M offense.  My tip - Alabama wins but bet the Tigers to beat that spread.

The Capulets:
﻿
Posted by Ryan Beaumont at 2:08 PM

My former boss went to Auburn and last year he was pulling for Alabama! Quel sacrilege! Happy Thanksgiving, Ryan! :)