December 3rd, A Date that Will Live in Infamy

It's My Blogoversary!
or Why do we blog?

At this auspicious occasion of my 3rd Blogoversary I think it's important to paraphrase the great Winston Churchill by offering:  "never has so little been owed by so many to one idiot blogger!"


Yes, this is the 3rd anniversary of my blog which means I feel compelled and pressured to write something prophetic.  Which can only mean I'll really write something silly!

But before I get onto my theme today I do want to recall a meeting I recently had with another blogger.  That blogger recently wrote a post (here) and so I, of course, will pretend like I am paralleling that post with an anecdotal metaphorical simile.  Translation, I'm just going to steal the idea so I don't have to come up with an intelligent theme for my 3rd Blogoversary!

This transcendental convergence of bloggers seemed epic at first - would we really be able to meet, what would we talk about, would he spill the beans after that I'm really a dork?  Thankfully, Ad did show up at that Starbucks and he got his drink and I got mine and we sat down and started to talk.  Soon the left/right coastal blogging convergence became a conversation between two men all of a sudden not so different.  Two guys talking about figuring stuff out via this Google Blogging thing.  We liked a lot of the same stuff, were confused by the same stuff (translation - where the HELL has Kat gone; thankfully she has since returned), and of course had the same myriad of family challenges.  We both have daughters we hope to help navigate through life, get into college, and become hopefully a little smarter and more savvy than their dads!

In the end what I can truly say is that Advizor is in fact a very nice guy.  A guy living the same stuff I am and throwing it out there from time to time on a blog for the rest of us to take a quick peak at.

Of course we did talk a lot about blogs and as Ad's post indicated "why we blog?"

We talked about blogs we used to love to read and some of our personal interactions with other bloggers via e-mail.  Ultimately we talked about why we do this seeing as we ain't getting paid.

As Advizor said perhaps we are looking for that spark that might give us inspiration to write the next great American novel or a catchy script.  Maybe it will be the next "Men of a Certain Age" or some type of "Dads Gone Wild."  Who knows?

For me, ever the quoter, this is probably like that Jim Croce song:  "like the pine trees lining the winding road; I've got a name, I've got a name."  I think we all have an inner story that screams to be told.  The beauty of social networks is that we now have a path for that story even if it just leads to a few followers.  And what we find whether we blog or just read is that some of the most interesting stories come for the most unsuspected sources (wait, that sounded so good but I really just paraphrased that thought off the movie Ratatouille).  In the end we connect by sharing those stories in a way that is way more meaningful than simply thinking "hey that Dad on Good Luck Charlie is just like me."  Yes, for me, it's better to be an active participant in the dialogue rather than just sitting on the sidelines and viewing the parade going by.  Maybe as I talk it out I can figure it out or maybe somebody will just call me out and then I'll know what it's all about.

As I think of that, it sounds so profound.  Which of course is not really my schtick so perhaps it's more like that climactic last sequence in "Horton Hears a Who" when all the Whos stand up and yell "we are here, we are here....," in hopes of averting being cast into boiling water.  Because you know "a person's blogger's a person no matter how small goofy."

Yes I think we all want someone to know that we are here and that perhaps in doing so we can connect in some meaningful way.  Maybe that is the ultimate saving grace of social media that others may know we are here and that we are going through the same life challenges.  That connection to some other person in Valdosta or Vietnam brings solace to the soul just like running into a fellow blogger at some Starbucks in Orange County.

So perhaps that transcendental convergence at Starbucks in the real physical sense doesn't seem so spectacular but the journey that got us there is the important metaphysical transaction that makes this stuff important and transformational.  Yes, someone is really out there and they hear me and better yet they understand me or at least are going through something similar.  And if they are going through it and surviving, maybe we will all come out on the other side OK.

As for me, I've said before, I started out simply wanting to be an East Coast Riff Dog that perhaps was a little more "real guy'ish" and not so suave and sophisticated.  What I found is that I loved reflecting on my experience and sharing my perspective.  By tossing in a few pinches of humor I thought I might connect, sort of like a naughty Good Luck Charlie episode where the dad can't help being a screw-up.  Perhaps somewhere down the road I transcended my focus to attempt to be some idiot-man's Jerry Springer'ized F. Scott Fitzgerald short story social commenter.  Except for me I wanted to identify what it meant to be part of this hybrid social dating circuit in the electronic age perhaps no so far off from Fitzgerald heady "Jazz age" days.  Who knows, sounds good as I write it - for sure! 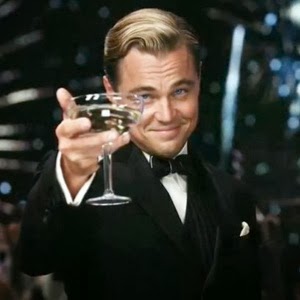 I guess in the end I'm still not completely sure why all this is so tempting.  What I do know is that this is my 375th post and I've probably written over 1,000 pages of content.  I guess if I were smarter I would have used that time to write a novel or script.  Surely there is a script deal out there for a Family Guy turned bad, a latter day Al Bundy chasing MILFs, a common man's Great Gatsby looking for his Daisy on a screwy cyber dating site!  But what makes it worthwhile is that 119 citizens of the world have for some reason clicked on to follow and that is an awesome feeling - well worth the time.

Anyway, I am truly grateful you guys have stopped in and read about these silly adventures.

As the song continues....

"They can change their minds but they can't change me.
I've got a dream, I've got a dream.
Well, I know I can share it if you want me too.
If your going my way, I'll go with you."

Thanks for going my way for a little while, it's been fun sharing the road!   :)

You know as I think about though my one main regret is that I never developed a blogging enemy or nemesis!  I think I would make such a great evil blogger!  But perhaps I am too much of a conciliator to have a true nemesis.  Perhaps someone could be my "Frenemy!"  Would you be my "frenemy?"  :)

Posted by Ryan Beaumont at 8:35 AM

Email ThisBlogThis!Share to TwitterShare to FacebookShare to Pinterest
Labels: Blogging, End of the Beginning

Happy Third Blogoversary Ryan! You are the deepest goofy blogger ever. Bravo! You nailed it. Here's to many more posts, and the fun behind them!

Congrats Ryan! I've so enjoyed reading about your adventures!

Congrats on three years, that's quite an accomplishment.