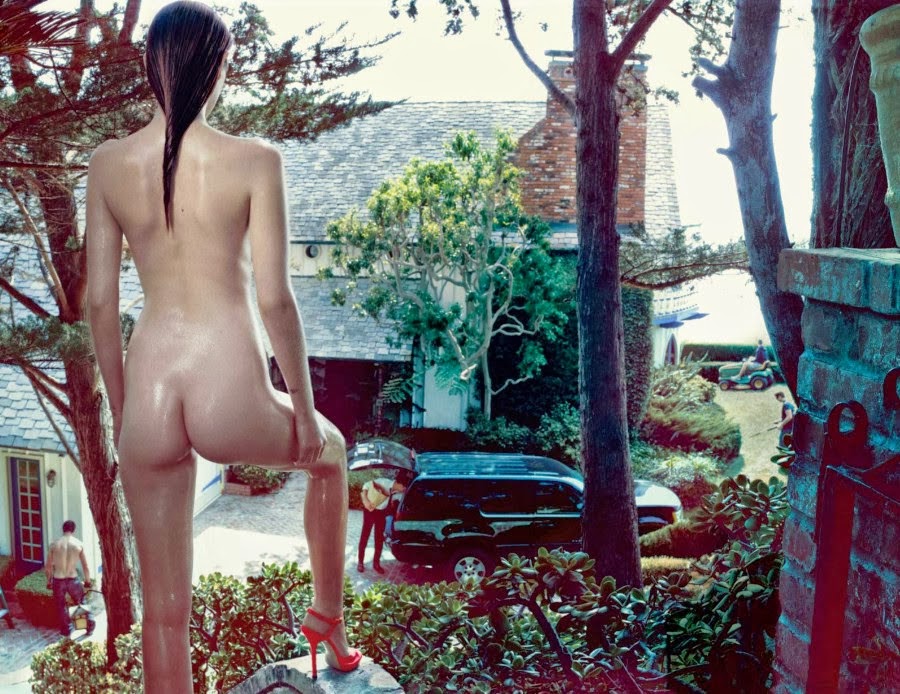 It's a Good Friday
to Hop Over to Three Spelling Mistakes
and join in!


I'm so glad I found my men and I love seeing them happy.  Even now I watch over them to make sure they are going to be OK.

But a few years ago Wisteria Lane was not so happy.  It makes me feel good to know I changed all of that.

Take Larry over there on the mower.  It's Saturday and he's at home.  He'll finish the yard and then he'll actually spend some time with the kids, maybe cook out on the grill, and then make love to his wife later this evening.  But when I met Larry he had a really bad 108 hole a week golf habit.  He focused more on his backswing than his family's dreams.  I taught him how much fun a woman could be.  A few rounds with me and he realized using his driver on a lady was much more stimulating than using it at Pebble Beach.  When he took those lessons home his wife was happy enough to keep him off the course.

I see Jim too.  Jim is a really good guy, smart too.  But as a landscaper working with his hands he didn't feel the intellectual equal of his History teaching wife.  But after maneuvering his firm hands all over my body we read the classics and learned French together.  That summer he took his wife to the South of France and they came back lovers again.

Oh that's Jeff, my busy accountant there bringing in the groceries.  Yeah poor April used to say she was a tax widow named after the worst month of the year; the end of tax season.  But late at night when Jeff was exhausted and could think no more he would just lean back in his chair and I would stroke him until his mind was free.  In those moments of freedom he found that taxes would get done when they got done but you could only enjoy today, today.  His wife was only too happy to welcome him back into her bed on those April nights.

And yes I even see Harry putting out the trash there.  Such a sweet guy, wouldn't hurt a flea and would do anything you tell him.  The one thing he couldn't do is say what he wanted.  Let's face it his wife pushed him around.  But I asked him to take my body and demand what he desired.  In surrendering to him I taught him how to guide a woman to what she and he wants.  In doing so he was able to give his wife what she wanted - confidence.  There sex life was never better after.

Yeah sure all those wives looked at me and would gossip to one another about "that bitch" that lives over there on the corner of Rosemont.   "Why can't she get a husband of her own," I know they would say.  If they only knew what I did for them.  But thanks is not why I was chosen to do this, it's revealing the happiness.

Oh why am I wet and in heels?  That's 'cause Jerry just loves to do it in water.  The heels you ask?  Well I'm a lady, if I'm going to be seen in public, I'm going to be in heels if nothing else!

I don't know what's worse about Jerry's wife that she's jealous or that she is closed off to anything new and erotic.  Which are both turn-offs, you know.  Poor Jerry had to sneak me in while she was getting her monthly wax treatment.  Too bad she got her days mixed up.  Not only did she miss her appointment yesterday but she found out why Jerry had worked so hard to get the pool ready by Memorial Day!  If she would only let go she would find out she was the one Jerry wanted to go skinny dipping with all along.

Too bad I had to get discovered by the one chick with the worst temper on Wisteria Lane and didn't mind doing something about it.

Oh well, this did end up being a wonderful place to keep watch over my guys.

Posted by Ryan Beaumont at 8:27 AM

Yes, well played indeed! I'm all for a woman helping a married couple spruce up the bedroom....I would hope to be included though!

Definitely a lot of people should move to Wisteria Lane.

Daring to be Darling said...

Thanks for the giggles :-)