My Interview with Ashley Madison 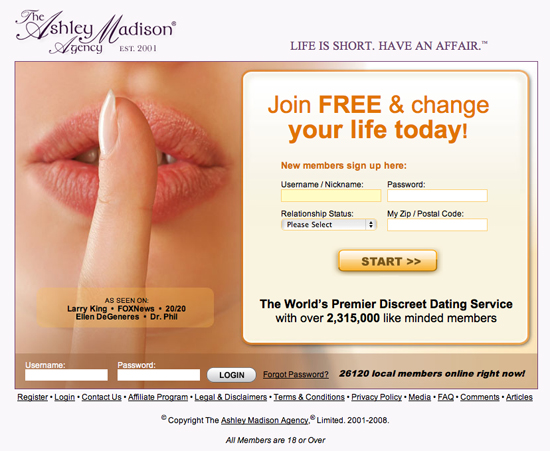 In preparing my questions I spent a lot of time watching videos of Noel Biderman.  Say what you will about his service but time after time in every venue he is always a gentleman even when his questioners, be they Dr. Phil or the View, were rather snarky.  I tend to be curious so I did more google searching of Noel Biderman.  I was curious what this guy was all about; what might daily life be for him.  The most interesting thing I found out about him was his involvement in youth football in his hometown of Toronto.  Google his name and you'll find a lot of interviews but what you won't find is him screwing around with girl x or y.  Take a look into his personality and you find he actually does "walk the walk" when he says he's a family man.  I don't know if that makes you feel better about his service but at least you know who he is at the end of the day when he gets home from work.  When I asked him about the importance of balance he replied and his interest in coaching.

"That is absolutely a cornerstone to my happiness if not success – my entrepreneurial success has not changed me – I am still the family man I have always strived to be, I still have the same group of friends from before high school and I still love the platform that sports provided to both coach and be coached."

While Noel did respond to my e-mail in the end it was mostly Ashley (I suspect) who answered my questions.  Sure the answers were somewhat "boilerplate."  But you do have to hand it to her, she knows her "talking points."  I would, however, like to think I refined a little more out of the discussion.  I like to understand how things work.  A lot has been said about the morality of Ashley Madison but not everyone thinks about why this thing works.  Hopefully this will give you a little understanding of the ingredients that make Ashley Madison such a success.

I certainly do want to thank Noel and Ashley for spending a little time with a crazy blogger, they certainly didn't have to.  But I guess that is the great thing about the information age, it has become fairly easy to get connected.

So here are the answers to the questions that had bothered my soul.  Well, they really hadn't bothered my soul but I do like that Jimmy Buffet song.  I think the most interesting comment is the one about women and Ashley Madison.  As I have always know, and have read, the success of Ashley Madison is due to the comfort zone it builds for women on the site thus allow them to control the dynamic of the site.


The intro to this interview is (here).

Please see the answers to your questions below:

1)  Ryan - I remember an episode of "All in the Family" where Archie and Edith have an evening out with a couple they just met.  Later in the episode it is discovered that this other couple are "swingers" and into "wife swapping."  The episode is so funny because of the contrast between what was (at the time) regarded as a very traditional marriage against what was considered an off the radar "deviant" relationship.  Fast forward almost 40 years now and that type of interaction doesn't seem so odd.  Thinking of that episode (if you remember) what do you feel has been the role of Ashley Madison in transitioning society's view of how we define a "traditional" relationship?

Ashley - AshleyMadison.com is a platform for like-minded adults who are already in relationships and who are looking to have affairs. People have been unfaithful since the dawn of time, however, the site wouldn’t be as successful as it is today if it weren’t for some key events. In particular, the rise in female infidelity has had a dramatic effect on our success –something that we wouldn’t have seen 50 years ago.  This change has been fueled by two key ingredients.

Infidelity was once believed to be an activity reserved exclusively for men. Now, as women have more financial independence, and achieve higher education and enter the workforce, females now find themselves in situations where they’re able to actively seek out a way to have their physical desires met that are often left unfulfilled at home.

Technology is the second factor, changing how people pursue affairs. Prior to current technologies, committing infidelity was a far riskier behavior and people put a lot more time and energy into having an undiscovered affair. Prior to smartphones and the Internet, there was no private way of communicating with a lover. Writing down or memorizing phone numbers, using a home landline, sending secret love letters, or making excuses to “take the dog for a walk” to use the nearest payphone, have now been replaced by discreet messages sent through password protected phones, emails and online dating sites.

Ashley - We always knew that AshleyMadison.com would fulfill a need that, prior to us, wasn’t being serviced. The site has been very successful and now has over 24 million members in 36 countries – we just recently launched in South Korea.


3)  Ryan - I read you had a "light bulb moment" when you read an article about married people on dating websites.  But more than that initial idea, what were the original core tenets that Ashley Madison was found on.  By that I (personally) believe that the success of the site is driven by the empowerment of women and how they can control the dynamic of interaction.  This creates a safe zone for them to operate successfully and thus provide the platform for men and women to meet.  Is this the case?  Was this intentional?  How did you arrive at this realization?

*   As an aside it occurs to me that men, when living in all-male residence halls in college, are basically animals.  When you add females and turn those residence halls into co-ed dorms a better society evolves.  Women when empowered and with the ability to shape social mores make men better.  Do you think Ashley Madison fosters this paradigm and was this your aspiration?

Ashley - When we started AshleyMadison.com we built our branding and service around women, as I firmly believed that female infidelity was a trend that was just getting started.

Previously, if women decided to pursue an affair, they usually looked in their workplace or in their circle of friends, where – if discovered - they would lose not only their partner and their lover, but also their friends. So we decided to build the service for women,  from the color palette we chose, the name AshleyMadison, the choice of word “affair” instead of cheating, were all chosen to appeal to women.


4)  Ryan - As I said above so much has been written from people that were pre-disposed to dislike Ashley Madison and were using your interview for validation purposes.  And I must add that in all of these cases Noel (you) acted in such a professional/gentlemanly way in responding to so many loaded questions.  Given that, what questions about Ashley Madison have you NOT been asked that you wish you had been asked?  Let me have you ask yourself those questions and hear your answer.

Ashley - How has AshleyMadison.com helped millions of marriages across the globe?
We provide a platform for people to have undiscovered affairs – a way to fulfill needs while keeping marriages intact.


5)  Ryan - I have one blogging friend who is on Ashley Madison who was approached by a survey by an academic entity that mentioned they were funded by Ashley Madison.  Does Ashley Madison sponsor/support any relationship research that affirms benefits of the site (or refutes)?


6)  Ryan - Are you aware of the impact Ashley Madison has had on blogging culture?  There have been several fascinating blogs such as "Ashley and Me" written by a Riff Dog that have achieved almost "cult like" fame.  Have you followed them, embraced them?  What are your thoughts on these blogs and have they shaped Ashley Madison in any way?

Ashley - These blogs gives us a way to see the positive impact AshleyMadison.com has had in the lives of so many people. Blogs are a great outlet for people to share their experiences and stories, and are perhaps a way to prompt others to pursue their own discreet affairs.


7)  Ryan - If that is not too much and you still have time to answer then I'll ask - where to from here?  Do you see Ashley Madison as part of society when you are a grandfather?

Ashley - Infidelity has always been and always will be around. I believe that the future is bright for AshleyMadison.com.
Posted by Ryan Beaumont at 11:05 PM

Email ThisBlogThis!Share to TwitterShare to FacebookShare to Pinterest
Labels: AM Advice, Blogging

So awesome they wrote you back!! It was very interesting to hear what they said about the blogosphere. Great post! You did something not even the great Riff accomplished!

I am stunned. You got them to answer! Bravo! This is a HUGE COUP! You asked a lot of the things I have wondered about. Great work! And they know about the AM blogs! Hee! This is so cool! I'm going to send all my readers to see this post.