Ryan's Liner Notes:  Up to this point everything that I had written on my blog had been biographical or introspective.  This was the first time I just wrote something off the cuff and partly fictional.  And because I'm a "keep it real" kind of guy, (well really I'm just honest about being fairly shallow) I'll tell you just what inspired me to write this.  I tend to get a lot of inspiration at the gym, it is after all where I am most in full-guy mode!

I was at the gym and taking in all the scenery one night.  The song above was playing and I got the idea of a fantasy type post.  I was going to do a fiction fantasy post where Jessie, the cute 20-something little head fitness instructor I love to flirt with, and I have an intimate work out session at the gym after hours.  You see she is very flirty with me and I in turn do whatever she wants (my job crosses paths with hers in some ways).  I have sort of decided that she would make a great next Mrs. Beaumont if I ever have the opportunity.  However she is pretty Christian so I doubt she would actually like a dirty old man like me, but "isn't it pretty to think so."

But then I got to thinking most of my interactions are of the "rumblin', bumblin', stumblin' whoa Nellie" type so that might be somewhat out of character.  So I started thinking funny.  And when I saw an ad for the movie Hall Pass I thought of a fictional conversation I might have with my wife.

After all, I felt it so unfortunate that I couldn't share some of my newfound experiences with my wife.  I was starting to become the person she had been seeking, it was just that I couldn't really admit to how I was becoming that person.  Unique paradox, but you know I always love paradox!

Oh, and this post has one of the highest all time hits - I wonder if the title is an attraction!  :)

The gym I go to has XM Radio piped in throughout.  In the morning they play 60’s/70’s Classic Rock with a splash of 80’s for us old geezers!  In the evening it’s more contemporary for the younger clientele. I really only work out in the morning occasionally, generally when I have something going on at night.  I also really enjoy watching the back and forth evening tennis match between MSNBC and Fox on the big screens in front of the stair masters.  And there does tend to be a group of cheerleaders from the local college that work out most nights around 6 pm.  Maybe that’s actually why I like working out at night?  At any rate, the other night while working out and watching Chris Mathews (and the cheerleaders) I heard the above song from the Bloodhound Gang and had an epiphany and mentally wrote the story below – tell me what you think of the idea!

Have you heard about this new movie (), what a great idea!

“A married man is granted the opportunity to have an affair by his wife. Joined in the fun by his best pal, things get a little out of control when both wives start engaging in extramarital activities as well.” 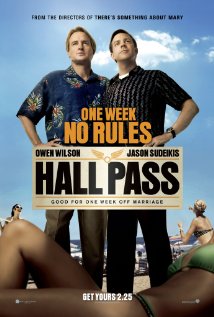 That’s me on the left of course; you can probably see the resemblance to Owen Wilson J Although I think I would find it fairly easy to stay faithful to Christina Applegate!  Ashley Madison should definitely get out ahead of this and get some sponsorship here!

So I have thought of how to combine Ashley Madison and this movie.  You see, Ashley Madison has been so educational for me that I believe it could help in other areas such as my marriage.

How could a cheating website help your marriage, you must be insane!

You see sex for me and has been on the “down low” for many years.  And to be fair I am more than responsible for that.  Among other things let’s just say that for most of my life I have not exactly been an advocate for oral sex and that has been an issue in our marriage.  But then along came AM and my attitudes have mystically evolved!

First, to explain I have to digress as I often do.  My first sexual experience (freshman in college) was less than satisfying.  I went to college in the same town I grew up.  One weekend my parents were out of town and I was house-sitting as good sons do!  Of course I thought it would be nice to have some friends over.  So some of my high school friends who also went to Hometown State U came over.  One of my female friends from high school brought some of her new friends from her dorm.  I had met one of the friends, Susan, before so we began talking.  She was an interesting person but not particularly attractive to me.  We all drank at my house for awile and then went out to a bar to dance and drink more.  While dancing I noted Susan seemed to be staying close to me.  A slow song came on and we danced and she started sucking my neck.   Hmmm…

Well to make a long story a bit shorter I woke up some hours later in bed at home with Susan giving me a blow job.  Now, I am the ultimate nice guy and since Susan had done this wonderful thing for me I felt obligated to go out with her for some acceptable length of time.  At the time I didn’t know the required relationship time for a blow job but we went out for a few weeks.  Anyway that first experience sort of turned me off of oral sex (both ways for many years).

Now let’s flash forward to 2010 and Ryan is seeking new female relationships through Ashley Madison.  Now one thing I have learned, though not through much practice, is that ladies like oral sex.  So as I begin to meet ladies and as I prepare for that first meeting with Alecia I resolve to be a good oral care giver!  So, being the sports nut, I break down some oral sex game film via soft core porn on Showtime (hey Howard Stern said he does the same thing on Piers Morgan the other night).  I also read Riff Dog’s blog and begin to see in my mind how to best apply this skill to a lucky lady.

Lo and behold on my first time out of the gate I strike gold and am successful, note previous blog where Alecia does orgasm when receiving oral sex from me.  And better yet, I enjoy it!

OK, so how does any of this apply to the movie I mentioned at the top of this blog entry and how it could help a lust-less marriage.  So I am envisioning a dialogue between me and Shannon and it goes like this:

:          No way Ryan, you know it would just be too weird now and when a guy doesn’t know what he is doing down there it just tickles and that is a BIG turn off!

ME:                         Actually, I have joined this training program created by a website called Ashley Madison and I have graduated from the oral sex program.  See I have a certificate and a seal of approval by their top teacher – Alecia.

Now doesn’t that sound like a great service!
Posted by Ryan Beaumont at 9:20 AM

This post is adorable! Love your honesty and I can't imagine not enjoying oral (the giving and the receiving...all SO great). Someday you will have to show Shannon your expertise.

Plenty of champagne might be in order if you try the new moves with the wifey. Then you can tell her the bubbly made you do it. ;-)

Too funny that you now have this great skill and talent ... and yet can't find a way to use it "close to home." But maybe the champagne, or wine, might work. It's certainly worth a try.