FOX NEW ALERT:  We Interupt Ryan's Countdown to inform you that Fox News has learned the source of our current Massive HEAT WAVE! 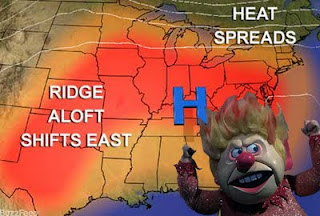 Friday's Heat Index in DC = 123 degrees, I guess congress IS a boiling cauldron in hell!  That's what you get when you live on top of a swamp!

Just a little info, the lyric above comes from the song The Battle of Bull Run by Johnny Horton.  The 150th anniversary of Bull Run was Thursday, July 21st.  Bull Run or Manassas was the first major battle of the American Civil War.

But on the other end of the spectrum if you want to know what love is all about listen to this!  I do have to give you a tear jerker alert though.


We will return you to our countdown on Monday.  ﻿
Posted by Ryan Beaumont at 10:17 AM

Oh gosh, that is so hot! I hate the heat, but we have been pretty lucky that it's stayed in the 80's. I hope you have ac!

This heatwave made me hornier. Not good!!! lol