I had been reading the FFF's of other bloggers for a few months.  I wanted to try it but needed the right picture to be inspired.  Often FFF has some pretty steamy photos to tell a story around.  Me being a bit prudish (I know that sounds odd coming from someone who has a blog such as mine) had not found the right picture yet.  Then this picture hit and I knew the story within minutes.  The guy playing guitar seemed so happy and maybe a bit naive.  The women certainly had confidence and knew just how to handle the situation.  My mind inventory of movie scripts immediately began "spooling" and it turned up Mambo Kings and Havana (and the Rod Stewart song Maggie May).  Throw in "coming of age" and you get a nice little story.

I like the story so much that I did a follow up a few months later continuing the story of Thomas and Nadja.  To extend my story I took that original thought of Mambo Kings meet Maggie May and added a dash of Islands in the Stream, a pinch of Revenge, and just a little Bridges of Madison County on the back end (read to the end you'll get it).

I'd like to know what you think about my mythical cast at the end!

Panser has been a bit out of commission this summer but hopefully he will be back up and running soon.  Check him out and those that post stories to his lured photos!  And when it returns join in, it's a blast!

God I remember the Summer of '58 like it was yesterday.  It was after Elvis and before the Beatles, but more importantly Bautista was still hanging on and Havana was one wonderful place for a young kid with an eye on life's experiences. 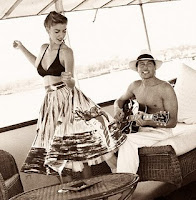 My doting Cuban mom and strict Merchant Marine dad wanted college for me but I wanted a different education so I spent one youthful summer in .   I had spent some time on fishing and pleasure boats out of Key Biscayne and saved enough money for a Gibson guitar bought at a pawn shop in .  I had taught myself a few jazz and Latin riffs so I was sure I could get a few gigs in  or at worst make a living playing pool or poker.

What I didn’t realize was that I would be going to school.

That summer in  was where I met Nadja.  She was a dancer at a club I performed at on occasion and was a rare beauty who's hair had been "kissed by the sun" as they used to say.

On those warm  nights Nadja gave me the education that every boy dreams of but few ever receive.

Thanks for the idea! http://insatiabear.blogspot.com/

Kissed by the Sun II
In the Sunlight of Your Smile

I had a few requests to continue this story and this is a great picture so here goes.  Part I is here if you want to go back.  In truth, as I wrote the story I did have a much bigger story line in my head but only had 188 words to give so this is a bit liberating.  This is not so much of a story or script as it is a basic plot line.

Background:  summer 1958 in  just before the fall of the Bautista regime.  Thomas Hudson, a 20 year old American from Miami, takes a summer off from college to live in Havana, Cuba working days on pleasure boats and nights as a back-up guitarist at the Club Dolphin Azul.  Thomas' strict Merchant Marine dad and doting Cuban mother were not happy with his decision but he wanted adventure!

That summer Thomas meets Nadja, a dancer at the club, and is immediately captivated by her charm, beauty, and elegance.  She is Cuban but owes her name and blond hair to her Hungarian mother.  Nadja is intrigued by Thomas for his passion for music, his love of life, and his innocents which is a welcome deviation from her current emotionally exhausting love life.

This sets up a love-quadrangle.  Previous to meeting Thomas, Nadja was romantically linked to 2 powerful men on opposite ends of the Cuban political spectrum.

Nadja is known in town to be the mistress of General Juan Antonio de Silva a very influential man in the Cuban military.  But her true love these past few years has been Andres, a revolutionary and close confidant to the Cuban guerilla leader Che Gavara.  Nadja and Andres fell in love a few years prior in their small farming town in .  They came to the big city together and their paths have intertwined ever since.

A year ago Nadja met the General at the request of “the movement.”  But the man whose world she was to infiltrate became her benefactor.   He introduced her to some influential club owners and got her the current “gig” as the lead dancer at el Dolphin Azul.  The General, although brutal with revolutionaries, is always kind to her.  She has discovered a warm side to him that can be comforting.  Of course if he knew the real truth she was hiding, her relationship with Andres, then his warmth would turn cold in an instant like a tropical storm.

Additionally, Nadja’s love of Andres has been put to a test.  Andres’ fanatical passion for the revolution has now surpassed his love for Nadja.  He can no longer separate himself from “the movement”  and has alienated Nadja.  And that has left Nadja lonely and torn between her 2 worlds.

Thus enters Thomas, her guitarist and newfound friend and potential lover.  Over the summer they form a bond based on a shared passion for music and Nadja's desire to escape the political intrigue of her current life.  On one beautiful August weekend Thomas suggests they run away from it all to an island adventure by hitching a ride with one of his friends to Cayo Largo.

And so on a sunny late afternoon their boat pulled into that beautiful port.  Nadja was so happy to be in the fresh salty air and the gentle breeze.  Thomas pulled out his guitar and played a lively salsa tune.  Nadja moved and twirled to the music.  All was happy, no revolution, no past, no future, no commitments – just the now!

As they got to the dock sailors, fisherman, and anyone else stopped to hear the music and gasp at the beautiful woman whose hair was kissed by the sun.  After they got off board, Thomas hailed a cab and gave the address of the little  his friend George had suggested.  Thomas had saved just enough tip money for the room and perhaps a nice dinner.  The little  was right on the water and the bellman walked them to their Cabana – it had a gorgeous view.  The bellman let them know dinner would be ready by 6 pm if they planned on eating there.

Now Thomas speaks…..
Nadja then changed for dinner in the bathroom.  My mind focused on the bed for the first time and it hit me what I hoped would be happing later that evening.  I was not a virgin.  My first experience was last fall with my girlfriend at school, Lola.  It was a bit underwhelming.  Lola was cute but born of privileged.  I felt getting into her pants was a riddle to solve not a sharing of passion.  Sex with Lola was mechanical, as if I was performing a service and Lola was just dutifully on for the ride.  And by year end I did find out that I was a toy that she played with for a time but had to put away when daddy decided it was time to meet Mr. Ivy League.

Well first was a lovely dinner.  The inn had a beautiful Sofrito of Seafood, Chorizo Sausage, rice, black beans and fried plantains.  We enjoyed ourselves and drank in the  view along with our Mojitos!  There was no war, no politics, just us and the warm sea air – this was delight, like a Hemingway novel or at least in the early part of the novel when everyone is happy.

After dinner we walked on the beach.  We found a secluded inlet and sat and enjoyed the sunset.  Nadja sat behind me, her chest leaning against my back and her legs and arms around mine.  As we enjoyed the view she tenderly kissed the back of my neck and ran her hands through my hair.  And as the sun set she said “oh my little Thomas you are going to remember this for the rest of your life, my dear.”

And on that beach Nadja and I made love for the first time.  And I do mean love for this was not simply sex – this was two passionate souls joining in the desire to pleasure and enjoy one another.  Over that evening, at first on the beach and later in our Cabana we were at one with each other – bodies moving in tandem, sweat seeping together forming rivers over our bodies.

And after a time when our bodies no longer had the strength to move we just lay there next to one another (Nadja’s head on my chest) on that bed, in that Cabana, next to that sea.  And for a moment time was frozen.  I have lived a wonderful life and have many memories but if in death I could ever go back to a moment in time that moment with Nadja would be it.

The entire weekend was beautiful.  As delightful as our first night was, we had a wonderful time just sipping coffee the next morning and talking about growing old.  We had a lovely day on the beach and at night more love making.  Sunday was just as delightful.  I wondered what would happen if we just never went back.  Could we just live in Caya Largo and make ends meet somehow?  I guess I’ll never know.

By Monday we were back in  and back to the life and the paradox of Nadja’s world.   A month later I was back at U of  at Nadja’s insistence.  She said she would try to find a way to come to the states if things went badly in .

In fact it was just a month later that Andres was discovered.  He tried to protect Nadja but the government already knew everything.  I was devastated.  A few years later I found out Nadja was able to retreat back to her village and disappear into the chaos of the revolution.

But I never heard from Nadja again until last month.  My grandson signed me up for this new computer thing called Facebook.  And then a few weeks later a homemaker from  named Nadia Mitchell sent me a note.  The moment I saw those eyes I knew it was her and when I read the note my heart leapt.

“My Darling Little Thomas how I have missed you.  Do you still remember our weekend together so many years ago….”

An elderly Thomas walking to baggage claim, a sign above says .

Posted by Ryan Beaumont at 9:15 AM

enjoyed both stories. your casting is terrific. now you need a soundtrack. ;-) btw, ram the sunlover has been guest hosting fff, while panser has been busy. you should check out his blog.

Thanks Sweets, I'll be checking Ram out in the next few weeks.