Yo Ho Yo Ho, A Pirate's Life for Me

"We're rascals and scoundrels, we're villains and knaves
drink up me 'earties, you ho!"
I've talked about writing sports for my high school and college newspapers before.  I do love to write.  It's my one regret in life that I did not give greater consideration to Journalism as a major in college.  But then again how many famous Journalist do you know from Ivy Tech!
As I've said the blog has re-awakened a joy of writing.  Of course I dare not delve into sports, I'd bore you with analysis and number crunching.  And so the happy medium and what has become probably my most joyous writing exercise is writing about my vacation travels and more precisely my adventures to the Mouse Kingdom.  I think in my next life I'll become a "real estate (or travel) novelist!"
So as I like to say "second star to the right and straight on 'til morning!"  Let's talk about surviving Disney! ﻿

A Disney trip can be exhausting on the heart, soul, and wallet.  Here are some simple ways to conserve your energy and net worth.

*  Let's face it, given the cramped space (no, Disney rooms are not roomy) and the presence of kids, sex and Disney usually don't mix.  So if you are not going to "get any" during your stay at Disney I'd suggest getting the next best thing to sex and that is a Dole Whip Float at Adventureland in the Magic Kingdom.  At a penny under $5 it's cheaper than a hooker, you don't have to worry about crabs, and it is orgasmic on a hot Orlando day!  This non-dairy Pineapple dessert paired with Pineapple Juice is the perfect mid-afternoon snack to perk up your energy and get that second wind.  It is only served in Disney World and at the Dole Plantation in Hawaii so it is truly unique.  And if that doesn't fill you up walk around the corner to Frontierland and pair it with one of those Churros off the portable concessions wagon!
*  Now that Dole Whip is very light and refreshing so it will leave a lot of room for the Grandaddy of them all - the Kitchen Sink (when you get back to Disney's Beach club).  The Kitchen Sink, priced at $26.99, includes the following nutricious food pyramid items:  8 scoops of ice cream, 1 banana, 1 Cinnamon spice cupcake, 1 angle food cupcake, 1 brownie, 1 Milky Way bar, 4 Oreos, every topping, and an entire can of whipped topping!  OMG!

I know you are saying $26.99 ain't cheap but really for 4 people if you do the math it's less than 4 banana splits.  Hint:  if you are a guy sit in a booth facing the pool, you can still watch that hot young mommy by the lifeguard stand!  I wonder how she is going to explain that "Juicy" tatoo above her ass to her son in 5 years?  Btw the Beach Club pool has a sand bottom - very cool! 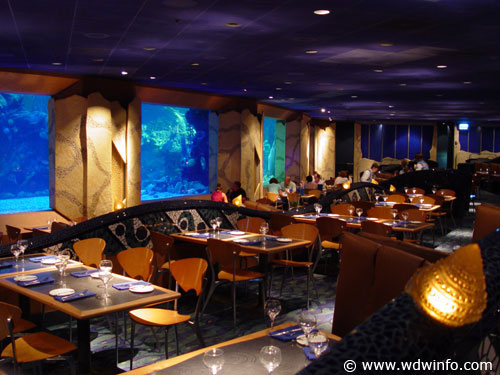 *   There are several wonderful restaurants at Disney, some you can even get out of the door without dropping 3 figures.  I've written about the San Angel Inn before and it is wonderful and more affordable than most.  There are others such as Boma (Animal Kingdom Lodge), Victoria and Alberts (Grand Floridian), Flying Fish (Boardwalk), Artist Point (Wilderness Lodge) and Le Cellier and Les Chefs du France (Epcot) that are wonderful yet slightly expensive.  A fairly affordable treat is the Coral Reef Restaurant in Epcot's the Living Seas.  You enjoy a spectacular view of the aquarium, can enjoy some lushious adult beverages, and more importantly spare your wallet some pain by enjoying some light and tasty appetizers for a meal.  My favorite is the Crab Tostados which are cool and filling but not too much and have a perfect accent of fresh cilantro grown on site at the Land next door.  They have a great appetizer sampler as well and a wonderful Lobster Bisque!
Rest Time for Daddy
*  Brian Starron (at the Boardwalk) - You wouldn't think you could say free entertainment and Disney in the same sentence but if you travel to the Boardwalk there is a wonderful collection of vaudeville-style entertainers.  Brian Starron is the best.  His magic is only matched by his silly humor (who'd uh thunk Ryan liked silly humor).  We actually have planned vacations around when he is performing.  Check the link above to a YouTube clip.  The kids will enjoy it and you can grab a beer at the ESPN club while they are mesmirized!

*  The Swiss Family Tree House/Boneyard  - If you are like me you are spastic about losing your kids (well really it's Shannon but I'm spastic about not getting her angry at me so I don't want to lose the kids).  There are some pretty fun enclosed play areas where you can monitor the entry and exit so you can kind of send the little ones off while you enjoy that Dole Whip across the way.  Two great places for the kids to kill a half hour while you recharge are the Swiss Family Tree House (In Magic Kingdom) and the Boneyard (at Animal Kingdom).  And after the treehouse go down to Pirates of the Carribean and check out Pirate Anglica - she's a smug little hottie! 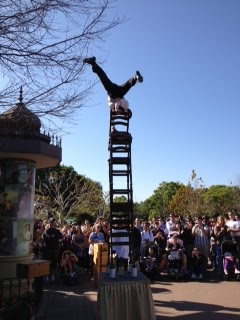 *  Epcot Street Performers - These guys to the left perform a wonderful street show several times a day in front of Les Chefs du France.  If you go around the corner you can get an adult beverage at the House of Wine just before the show!  Of course if you spend too much time back there it turns into the House of W(h)ine because your little one is bored and wants that $3,500 crystal Cinderella castle on display!  :(
*  Port Orleans River Roost Bar - At the end of the day you are probably going to be on a holy quest for a air conditioning, a comfortable seat, and a cold beer.  If something interesting is happining in front of you I'm sure that would be great but mostly you just need to decompress.  A great place to do just that and actually be entertained is the River Roost Bar in Port Orleans.  The guy (see link above) performs most nights and has a great interactive vaudeville type show (somewhat like the Boardwalk but in this case indoors and 20 paces from the bar).

*  When watching the fireworks at Magic Kingdom after the parade go over the Tomorrowland.  The fireworks originate from Bay Lake so you can actually see them better in front of Space Mountain and there is actual space to plant your ass in a seat and enjoy the show!﻿
﻿
The Rides for All to Enjoy

Disney really doesn't have many true thrill rides, Mission Space is the only one that comes to mind.  There are a few, like Thunder Mountain and Space Mountain that get your tummy just a bit.  Mission Everest may be a little more than the average "little one" may wish to take, mostly because it goes backwards in the dark and the Yeti jumps out at you (which scared the bejesus out of me the first time I rode it).
Pound for pound though my favorite is Big Thunder Mountain at the Magic Kingdom's Frontierland.  It's a fairly long ride, usually doesn't have the wait time of Space Mountain, and is a very enjoyable smooth ride with gentle hills and several fun curves.  A hot news item, Disney is planning a new coaster, The Seven Dwarf's Mine Train, to replace Snow White's Scary Adventure in Fantasyland for 2014 - it looks like a lot of fun and similar to Thunder Mountain.
If you are needed some AC and shade Mickey's Philharmagic is a must and usually fairly easy to get into.  It's 3D so really fun and interactive for kids and adults and the music is pretty good too!

*  Did you know that Johnn Depp patterned the character of Captain Jack Sparrow after Keith Richards, famed Rolling Stones guitarist?  Yep, he said Pirates were the rock stars of their day and what better rock star to imulate than Keith!
*  Did you know there is an entire tunnel system under each of the theme parks?  Yep, all delivery trucks go straight under the ground.  All the cast members go there to change, which is why you never see a headless Mickey.  The cast members even have their own cafeterias underground.
*  On an average day the Magic Kingdom has 45,000 guests.
*  Big Brother Mickey is always watching you!  Their is a command center under Cinderella's castle where all movements and actions are monitored.  If lines get too long - dispatch Donald Duck to get people happy and moving.
*  Did you know the first day at Disneyland went awfully!  Yep, the day was so hot that ladies high heels sunk into the pavement, invitations to the park were forged thus there was overcrowding, several rides broke down, and there was not enough bathrooms available due to a plumbers strike at the time.
*  And finally speaking of potties did you know there were "potty" resources to make you Disney "potty" experience as magical as possible?  Yep, there sure are - here it is!

Now go out and plunder some Booty me hardies!

Posted by Ryan Beaumont at 5:55 AM

Awesome. Planning a trip in the middle of August, so will bookmark this particular entry.

You and the family DID have a good time. Wonderful tips you've provided here! I especially like the sound of The Kitchen Sink. Thanks! And Happy Writing!