When You Get Caught Between the Moon and (the Potomac River)

"There once was a very lovely, very frightened girl."  It was as if she lived alone except for when a nameless silly blogger came calling every now and again.....

The last time I spoke about Sandee I mentioned something about a Late Night Double Feature Picture Show.  Of course in our case the first feature was Brad Pitt putting out a can out whup-ass to that zombie horde in WWZ (that movie did sound like a Wrestlemania event).  The second show was Sandee and I in the back of my van like a couple of teenagers trying to figure out how much time we had and how far we were willing to go before our curfews!  :)

Two weeks later I had another opportunity for a late night rendezvous.  Except me, the romantic at heart, really didn't want a repeat of the other week.  It just seemed "common," as a friend of mine would say.  I wanted spectacular, an occasion worthy of a movie script or a Lord Byron sonnet or something like that.

Oh *ull *hit Ryan you just wanted to get laid and wanted to do whatever would seem romantic to drive Sandee craza! 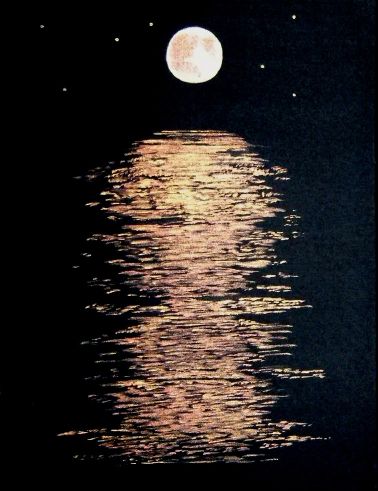 OK, your right.  But as I was thinking about what to do I thought of that lovely song "Moon River, wider than a mile.  I'm crossing you in style some day.  Oh dream maker, you heart breaker.  Whenever your going, I'm going your way...."

You know now that I think about it Sandee is just ever so slightly like Holly Golightly (how's that for a rhyme).  Sandee is sweet and a bit naive, the quintessential country girl somewhat lost in the big city, even though we don't live in a big city.

Anyway that's more like it Ryan.  Moon River, so romantic.  And it just so happens I know of a river close by that I know Sandee likes and I like!

I mentioned a moon-lit paddle-cruise to Sandee and she loved the idea!  Yes the thought of getting caught between the moon and the Potomac River seemed exquisite and yes song-like!

We met at our typical launch site on the river around 9 pm and paddled out into the warm night air.   The river glowed, bathed with the moonlight and all was quiet and serene.  We didn't talk much, just breathing in the air and atmosphere.  About 30 minutes upriver we found a placid spot on the river where the current was barely moving.  The water appeared as glass reflecting the shimmering moonlight towards our stare forming dancing sparkles of light as if we were part of an Impressionist painting.  We faced each other connected in our boats, her boat facing west, mine facing east.  We chatted about nothing much; our families, how we would get along with one another's parents, the upcoming school year.  I suppose at some moment I reflected on the duality of the power and the insignificance of the moment.  A quiet meaningless conversation yet one taking place in the middle of one of the most well known rivers in our country and a peaceful moment shared between two people comfortable with one another amid two uncomfortable life situations.

As is typical with us a comical reality soon set in.  Or rather it was more like, OMG I 'effing itch!!!!

Wait that didn't come out right - nobody had, you know, that type of itch.  I'm talking about 'skeeters!
We were out in the middle of a dang river, just after sunset, in the middle of summer.  I was about to go into a coma from the shock of blood-loss from the multitude of those mosquito bites.

So we decide to head back to shore.  A short paddle back and we were back to the cars and loaded up.

But again, no place to go.  I considered pushing for my place but I didn't think that was a boundary she wished to cross.  We ended up back at our last week spot and in the same position.  I guess "common" didn't matter anymore, but that was OK for now.

As we moved together Sandee became an intoxicating salty sweet dessert and I to her.  Her long hair cascading down into my face had that sweet floral aroma I have so come to enjoy.  Those floral accents augmented the salty beads of persperation that now formed gilded islands across her breasts.  I breathed in her aroma slowly and tasted those luscious salty islands as I moved over her.  As I then rose up and hovered above I saw that same moon now cascading it's beems across her lovely body and light now shimmered and danced along the river or moisture our bodies had created.  We moved slowly, drinking in the moment again as if we were characters in a painting; characters designed to preserve that ephemeral moment rather than live through it.

And what I knew at that moment was that I really didn't need to press.  We had had sex on multiple occasions.  What we really yearned for now was that ultimate affair prize the overnight adventure, the pleasure of waking up next to one another and enjoying a cup of coffee the next morning.

That opportunity lay ahead as a once in a lifetime experience was on my horizon.  Again the family would be on the road but this time I was also to stay behind to house sit for a friend.  A friend who would not notice if I invited a certain "other" friend over the help take care of the dogs.

And so this week's double feature was really more of the same but is that really ever a tragedy in these cases?  Gliding along the river under the moon with Sandee was a surrealistic impressionistic experience.

"Two drifters off to see the world.  There's such a lot of world to see.  We're after that same rainbow's end, waitign, 'round the bend.  My huckleberry friend, moon river, and me."

And now here is another song about that silly moon.

Your Sandee posts always leave me wanting more. As if you two were characters in a really good movie, I long to know what will happen and how your relationship will unfold.

You are such a weaver... the lush music, the sexy words, the stunning images - you make such a beautiful tapestry!

Sounds lovely. Well, except for the mosquitoes!