Well the Ukraine Girls Really Knock Me Out

Time for some more Beatles lyrics!  This song doesn’t seem to fit a blog about Ashley Madison? Well I’m expanding now so read on!
Interesting enough the addition of a public photo got me my first unsolicited notes.  In fact I got 2 winks within a week of putting up a public profile photo.  One of the unsolicited winks was from Astrid29 who was a pretty, single, 29 year old blonde from .  Not sure why someone from Charlotte would be writing me but maybe she travels to DC on business and was interested in taking me out some time!
So I write her back and tell her about myself.  She writes back and asks me to send her a note to oceanseternity@*****.com.  Wow, how exotic!
I ask her about 3 times if she is in DC often.  Her e-mails were always somewhat cryptic and talked of looking for the right person, that I seem very honest and caring, and that she is passionate about music.  She also sends more photos of herself – nothing pornographic, just nice pictures and she is certainly gorgeous.  And she also tells me her name is Ekaterina. 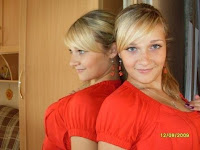 Finally, she does say that she is actually from a small town outside of in but now lives and works in .  Hmm.. I know AM has the “traveling man” application but that is a bit of a stretch!
Oh well, she is cute and I guess I am between AM girls right now (big assumption since I am after the first and assuming there will be a second) so I play along for awhile.
So for about a week she tells me daily about life and the dating scene in .  And she knows how to tug at the heart as one day she sends a picture of a young girl (presumably her) on the lap of a Russian soldier.  She says it’s a picture of her at age 3 with her dad and that her dad had died in when she was very young.
But the things you learn as a result of Ashley Madison!  Apparently there is a whole racket of women or more likely men posing as lonely Russian girls fishing for lost souls.  After, apparently falling in love with their American male suitor these ladies say they want to come to .    Then the poor guy wires money and of course they never see the beautiful young Russian lady friend.  Of course, I being the eternal pessimist found this information on this scam long before Ekaterina fell completely in love with me so I was on guard.  I did play along for about 2 weeks.  Ekaterina said she was a court security guard/recorder and had graduated from a Russian military academy.  Apparently Russian men are jerks so she was looking to the good ole’ US for salvation because lord knows us American guys are real gems!  She eventually said she had some vacation time coming up and wanted to see me.  It was at that point I stopped writing and I never heard from her again.  Too bad, she did send me a photo of her in uniform – she looked really great in that Russian military uniform!
So, was a hot, young Russian girl really interested in me?   As Jake says in the final lines of Hemingway’s The Sun Also Rises “isn’t it pretty to think so.”  Unfortunately, it was more likely that I was corresponding with Borat J  I think I hear Keith Jackson again “rumbling,’ bumbling,’ stumbling,’ whoa Nellie!”

Oh well, summer is half over, let's move on to those other AM ladies that look so interesting!
Here is some interesting info on the Russian scam.
http://www.russian-detective.com/scams/first_things_to_know.htm
And here is Borat!  Ohh.., now that I have that in my head, I wonder what Borat would be like on AM?  Hmm…. 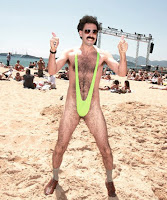 Posted by Ryan Beaumont at 8:17 AM

Email ThisBlogThis!Share to TwitterShare to FacebookShare to Pinterest
Labels: AM Adventures

Found you're blog week ago. Absolutely luv it! When you learned about AM I was giggling as AM has been around for years. I figured you would finaly find "Riff's blog.

Yeah, few years back, I was looking for a french bulldog in our local newspaper (from west coast). I emailed them, thought strange, got back the email from people supposedly from Africa in doing Christian work.

Said to send $ and they would ship the puppy. I knew that since there was no local number and email from Africa something wasn't right.

So I called the paper and reported it. They took the ad out immediately. So sad these scams are for real and if people aren't smart enough they will get scammed.

You're new reader and friend of blog,
Linda