I am not sure if this is kind of like that old SNL saying "it's better to look good than to feel good?"  I guess in life the way you do things is very important.  If you do things well often people will decide they like it after the fact even if they were not particularly looking for it in the first place. 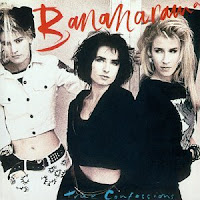 That song above was originally recorded in 1939 as a calypso/jazz song.  It was then re-recorded by Fun Boy Three in the early 80's but is most famous from Bananarama's Greatest Hits album from 1988.  Now I take no pride in quoting a Fun Boy Three song in fact back in high school I would probably get my ass kicked for listening to a group like that instead of the popular stuff like Van Halen and Ozzy Osbourne.  But I take no shame in liking Bananarama; DAMN that brunette is awesome!  She reminds me of Shannon.  Not my wife Shannon, who of course is not named Shannon, but the Shannon from high school that I had such a crush on, I used her as a namesake in my blog so many years after.  But now that I'm all grown up I can appreciate all those weird groups from the 80's!

In my little town a restaurant recently opened up.  I like the food but it certainly is not the greatest I've ever had, in fact it is a borrowed concept from some national chains I am familiar with.  But unlike many new restaurants they have simply done everything right.  The food is good, the store is clean, the service is wonderful (in fact perfect - not too much, not too little), the staff looks great and is very clean cut and in uniform.  Even though it is always crowded the lines move quickly and efficiently because they are correctly staffed and the nice atmosphere make it seem like the wait is not too long (and I despise waiting).  The owners are always present and approachable.   From day one they hit the nail on the head and I know that is hard to do with a new business.  We keep on thinking when is it going to die down but it never does; there is always a long wait.

If you do it right, people always decide later that that is what they wanted all along!

So why am I telling you this.  Because after our first hotel encounter that was cumbersome at best and after a comical attempt at an office hook up, Sandee and I decided to have another "soup date."  That btw would become our term for "going to the hotel."

But of course there was nothing special about what we were doing, we'd already done it.  But what was more important was how we did it.  Because as I came to find out "it ain't what you do it's the way that you do it."

So even though we had decided to have a "soup date" I actually decided to call Dominic (I know him) who owns the local New York style pizza joint and order one of his special supreme pizzas.  Sandee picked me up and we stopped by Dominic's place, picked up the pizza, and then headed off to that same hotel we had visited before.

But I had a special plan in store for today.  I brought video!

No not Katie Morgan screwing Dirk Diggler or anything like that.  This was much better!  Me.

Let me tell you if you can ever show a girl a picture or video of you dressed up in Victorian garb and dancing do it!  It'll make 'em melt.  They will be tearin' your cloths off by the second act!

And to make it even better as Sandee was laying down on the bed watching the video I was beside her massaging her and kissing her neck.  We didn't make it to the finale!

And this time I didn't let my mojo be adversely affected by restricted blood flow to vital regions of the body.  I focused on other areas of my body to stimulate.

At some point during the video Sandee rolled over and was on her back, me to the side.  I took that as an indication it was time to turn off the computer.  We kissed and slowly took each other's cloths off.

But this time instead of just worrying about the actual act of penetration I focused my mind on the total body experience.  For me that's not too hard.

Sandee long soft blond hair always smells so wonderful.  It was hypnotic to bury my face in it and breath in her scent as I kissed her cheeks, her nose, her neck, and shoulders.  Her legs felt so good wrapped around mine.  As always I worked up a sweat and soon there was that thin sheen of moisture between our chests and stomachs.  Her soft body gliding underneath mine was sublime.  And finally I love the  feeling of the perfect connection right at your pelvis; each joined together and moving in rhythm.

This time I didn't think I felt, smelled, tasted, touched and collectively felt that high.

It still took some time; it always does for me.  But early on I could tell it would happen for me this time, I just needed to relax and enjoy.  The more Sandee responded to me the closer I got.

Before I was not sure if Sandee had an orgasm, this time I was sure.  Of course there was the normal auditory indications, but those can be faked.  But soon enough I could feel the wetness on my legs.  It felt so slick down there it was hard to stay in.  I was sure this was good for her.

Knowing this was good for her turned me on and I could tell I was moments away.  But this wasn't just getting to a point of execution this was an explosion (on my part), truly that feeling you get in your stomach when you take that plunge down that roller coasters big hill!

After that we kind of flopped in a sweaty sexy mess and just laid there for a long time.  Unfortunately as always time was short.  We cleaned up and drove back to my car and said goodbye.

It was almost Christmas and we knew she would be going her way and I would be going mine.  Sandee had been a constant in my life now for almost five months.  We had written daily for the first two and then seen each other weekly for the last two and a half.  Now it would be at least two weeks before I saw her again and that felt troublingly troubling to me.  I think she felt it too.

But for now everything felt so good!

So folks, if there is one takeaway from this post or any other remember this:

You really are speaking the truth and moreso I would contend that "It's not just what you do, it's the way you do it." Although I am way too lazy to google a song or video to match up with that tag line.

However now the new question in the ongoing SanDdEe story is, Will SanDdee make it past the holidays and back into Ryan's life?...

@ Gert - hey I'll give you a little sneak peak into my process (yeah right). I have these posts in my head several weeks ahead and then I hear a song on XM Radio and it clicks. I started this post with the song and the date but then link to the restaurant hit me later so I tried to make the whole concept into a life outlook.

Then again, even a blind pig finds and acorn now and again as they say.

I keep thinking I'm in the wrong blog... you've talked about sex four days in a row! So envious! But you deserve it after all that waiting.