Ryan's Repeats - Give Me a Ticket for an Aeroplane

Truth be told you have to have a bit of an ego to write a blog for over two years.  You are also most probably going to have a real ying for personal attention.  Me, I'm a numbers guy who really doesn't mind seeing others succeed.  So given that you might think I'd be satisfied with having a good flow of blog hits each week.  Wrong, I really stopped tracking hits daily a long time ago.

But damn if I don't get completely perplexed over comments.  I kind of feel like those stewardesses telling you how to put on your life-jacket.  I see you looking but I'm feeling like nobody is paying attention (or maybe you are just looking at my tits like I do to the stewardesses when I'm not listening to them).  I have to admit I get a little diva bitchy when I see another blogger post a quote by some dead French guy and say "today sucks" and then get 20 comments.  Me, I'll mentally write a post for several days, shaping it as I drive to work or while I'm in the shower.  I'll think its good and post it and then "thud."  It's like the 4 way stop in my little town on a Saturday night - Nada, nothing, zippo, NO COMMENTS!

Sometimes I think I'd get a total hard on if somebody just told me to "*uck off DIPSH*T."  At least I'd know someone was affected by what I wrote!  Of course there is a part of me that says to myself "myself they are afraid to comment, does one comment on Shakespere, Hugo, Dr. Seusse?  Of course not!"  But I also think it might be like when you go over to a friends house and the dog comes out and starts licking its balls.  Part of you wants to laugh, part of you wants to puke.  But what you do is just try to ignore it and hope it goes away.  Of course unfortunately, with my blog, it just doesn't seem to be going away.  Anyway, I suspect a lot of people read, gasp at the figuratively canine ball licking, and then painfully move on.

OK so that is my comments soap box for the day.  I guess in my old blog age I've just gotten a little bitchy.  Pretty soon I'll need some Depends for this written diahrrea. 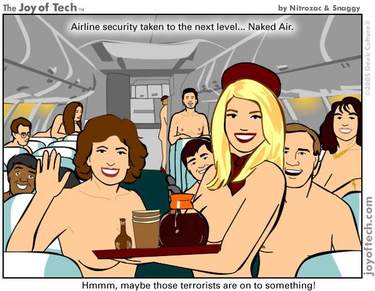 But luckily I did create one post that got 13 comments!  Well 3 of them were a mistake and one of them was mine but who's sweating those details anyway; I'm not the Tea Party and you ain't the IRS!  Bottom line though, I did get some good comments.  And Elle talked back to me in pilot lingo!  And it all had to do about airline travel which I hate.  You see, write something you hate to do and get lots of comments - no sense at all.  Oops there I go again bitching about comments again.   Anyway I was thinking about that post and turning a positive into a negative and found the picture to the right and the hilarious video clip below.  See even when you hate something you can find humor in it.  And once you find humor in it you really put yourself into it.  Maybe thats why I got all those comments.  Wait, shut up with all the bitching already!

Seriously though I really enjoyed writing this post.  I actually wrote it on a plane as I read an article in some in-flight magazine about social networking and then later saw something on yahoo news.  I knew I had to turn this idea into inspiration.  I think it worked, I may be onto something!  :)

But remember the most important thing in life is - don't judge too quickly!  It's even more important at 20,000 ft (check it out it's hilarious).

In spite of being a left of center kind of guy I do tend to believe the "free market system" is the best system in the world. It allows us to be totally concerned with what benefits us most; taking care of ME!

In my professional life I have often been one of those "contracted" workers. The guys you bring in because you don't want to do the dirty work. "Bring in Beaumont, he'll clean up the poop for us" they often say.

So coincidentally the other day as I was thinking about summer vacation and travel I happened to come across this article about using social media and airplane seating. Instantly I got one of those "ah-ha" moments (read here). You see airlines like KLM and Malaysian Air are now letting you pick the person you sit next to on those long plane rides.

You got to hand it to those Malaysians to come up with the really BIG ideas! :)

What a great idea and just in time for our summer travel season!

OK, so that sounds great in theory; kind of like socialism - let's all just share. But I know me and when I'm flying I just want an aisle seat and for the person next to me to shut the *uck up and let me read or do the SWA crossword puzzle. So I'm not really going to care if you crochet, graduated from Cow State U in '75, or have photos of your idiot nephew on your Facebook page. What I need is REAL "free market" style info that might make me more interested in my "seat-mate" than just snoozing through the flight.

So let's ditch Facebook and bring in a real free market "gunslinger" to run this Social Media service for those airlines. Someone who can deliver just what we need. In the immortal words of Ryan Bingham (George Clooney's character in Up in the Air) "I'm like my mom, I discriminate; it's faster."

So I am proposing that Malaysian Air scrap the Facebook plan and go with Ashley Madison to run their "matching" site and deliver what we are REALLY looking for. I can see it now.

Flights are Short; Make 'em Worth it!


The Ryanator
"Can You Take Me High Enough"

Preferences and Encounters I am Open to:

Hey, don't worry, that won't be an underwear bomb I'm trying to detonate. I'm just playing with myself! In fact since I'm 45 and not flexible enough for the mile high club in the bathroom; how about a hand job and a 7 and 7.

But lay-off the footsie stuff, I like my leg room!

What Really Turns Me On:

I usually like women with big tits but if we're in coach plz be C cup or smaller! And yes I'm a Dom so get you're arm off the rest, I like 'em both and no I'm not going to turn down the air!!! Oh and if you're not eating those peanuts, I'll take them.

I want to look deeply into your eyes and read your soul! That is if you can suck a golf ball through a garden hose! Otherwise I'll stick to my Kindle; gotta get through Mockingjay before my daughter! :)

What I Am Looking For:

I'm not in the mile high club, I've never had a 3-some, and I don't have an Asian girl on my portfolio so let's do it with one of those Stewardesses on the back jumpseat!

My real name in that pilot talk is (Bravo) (Echo) (Alfa) (Uniform) (Mike) (Oscar) (November) (Tango); I just love talking that pilot talk! Btw, how about we share a vector to the Airport Holiday Inn; they have the best free breakfast in town. Love those Cinnamon rolls (and the shampoo)!


Btw, I'm trying to figure out a way to get Ashley Madison to partner with Pinterest because that is apparently where all the chicks are. Anybody got any ideas??? :)

Posted by Ryan Beaumont at 9:54 PM

Ryan, you comment whore! ;)
I love your blog, but I usually don't comment because I have nothing interesting to say. But, I will endeavor to change that and respond more often be they good, bad or ugly. You might regret it though.

@ Victoria - atta girl Victoria, now we're talking. I love candor and appreciate someone who isn't afraid to call a spade a spade (or in my case a whore)! Thanks!

I'm like Victoria, i read a lot but don't comment as often as I should. Sometimes I feel like I'd be too snarky, and I hate the two word "great post!' kind of comment. I want to be able to say something a little more eloquent than a stoned high-schooler. that being said, I love comment on my own blog so I'm a bit of a hypocrite.

The "Meet in the Seat" story just hist my radio station and I think it's a horrible idea. I used to fly all the time for business and I'm in my cocoon the minute the doors close. iPod on, book at the ready, trail mix in the seat pocket in front of me, and, unless you are .... well that's never happened, but I want to be left alone. And don't even think about the arm rest. I'm a silver level fler, it's mine.