One Never Knows Do One 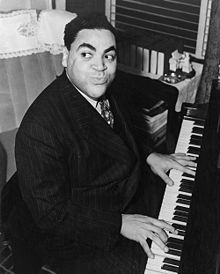 Fats Waller was a jazz icon famous for several works such as "This Joint is Jumping" and "Ain't Misbehavin.'"  He is also famous for that great one-liner above "one never knows do one?"  I love a good malapropism like that.  It seems so obvious that even someone like me can understand it.  And yet perhaps it's true meaning is not so ephemeral.  I suspect it has something to do with balancing the reality of outcomes with life's journey, the pursuit of happiness, passion, and the search for reason.  Life gives you so many paths and you do your best to choose the right one.  However, in the end, you just don't know what life will deal you.  Then again the quote could really just mean "one never knows..." as in you never know what's going to happen when you eat at that Mexican place next to the railroad tracks?  It might be great.  You might end up just having gas.  You might get the *hits.  Or you might die of E Coli?  One just never knows, do one?  :)

As you know I write a lot about this woman in my life named Shannon.  In the blog she is my wife. Of course no idiot would use his wife's real name in his blog so that is not really her real name.  I use the name Shannon because my wife (not really Shannon) reminds me of this girl I had a major crush on in high school named Shannon.  Her name really is Shannon which of course would be stupid to really use her actual name in a blog but then again nobody really ever nominated me for a Nobel Prize in Smartness!  Then again maybe I'm being like Fats Waller and talking in circles just to confuse everyone which would be entirely possible if I were able to orchestrate something such as that.  But then again we are talking about me so how likely is it that any of that is the case.

But lacking something to write about I thought it might be nice to tell the story of the real Shannon and how she relates to my Shannon or rather my "not-Shannon."


﻿ Shannon was a bit nerdy through middle and early high school.  For some reason I remember me knowing she had a crush on me during those years.  When she returned for her senior year for some reason she was the "it" girl.  It wasn't that she went off and got breast implants or took a class on how to give a good BJ.  She just became the "it" girl.  "It" was really about attitude.  For some reason Shannon decided to be the "it" girl and everything about how she dressed and how she carried herself was "it."  In hindsight I really have to admire that.  I noticed her "it'ness" pretty quickly but I was not quick enough.  A friend of mine asked her out early in the year and soon they began dating.  They dated for all of our Senior year.  Toward the end of the year they broke up.  I thought I had a chance but alas fate always seemed to step in the way.  The sick thing is that she had at least three friends that were all interested in me and that were all arguably as attractive.  One of those girls has even achieved some fame as a consultant to a fairly high ranking government official.  I could tell you but he'd probably have to kill you!  :)

But silly me always had to chase the "it" girl and that "it" girl (Shannon) was always just beyond my reach.

We went on to college, me to Big State U and her to another local school that was basically the school you went to if you didn't get into Big State U.  Let's call it C+ State U.  Over the next several years I would see Shannon occasionally.  By my estimate she was a sorority party girl majoring in an MRS degree.  That was C+ State U's specialty!  At times I thought about the fact that she was so smart in middle school but had chosen a rather superficial pathway.  I lamented that she could have been much more.  Or maybe it was just sour grapes and I was really lamenting on how much more she could have been if she had been with me!  It's probably the latter.    :)

I graduated and went my way and I assume she went hers.  I did not see her again until our 10th high school reunion.  I know it would be great now to say we hooked up at that reunion.  But I had just gotten married to a hot young woman fresh off a Liberal Arts degree.  I was so proud carrying my Shannon around that I barely noticed the real Shannon.  I think I remember speaking to her briefly. I also remember she was one of the few who already had kids and she was on the arms of a very successful looking gentleman who I believe is a lawyer.  It seems we had both achieved our desires in life.

At this same point in time my Shannon, as I said above, had just graduated college with a Liberal Arts degree two years prior.  To many she may as well have been preparing for an MRS degree and had found her future soul-VP-mate in Ryan (that's me Ryan Beaumont not the Republican, you know, VP candidate - but you get that I suppose).  Anyway, Shannon had started graduate school but in truth was only discovering who she might be able to become.

At that 10 year reunion there was not much mystery to Shannon and Shannon, just two gorgeous women with their successful husbands enjoying the night.

Now let's fast forward 10 years later to our 20th reunion.  I remember the planners of the reunion put together a little portfolio of bios for all the attendees.  I was glad to see that Shannon was attending and read her bio with great interest.  Based on our 10 year reunion I was expecting Homeroom Mom, Secretary of the PTA, Girl Scout Troop Leader, yada, yada.  But to my surprise her bio was ripe with silly and funny comments about dealing with her teens and the musical fads of the day and low and behold a work bio that included what was becoming a very successful career in real estate.  Suddenly I was very curious to find out how life had turned out for my Shannon (or rather the real Shannon, I was all too aware of how life was turning out for my Shannon).

On the night of the reunion I did see Shannon.  Again, I really didn't speak to her at length.  I noticed her hubby was greyer, considerably chubbier, and had a certain dejected beaten down by life aura that was in stark contrast to his confidence he projected at the 10 year reunion.  I also noticed he and Shannon couldn't be any farther away from one another in that room.  Shannon herself was gorgeous and had not added anything to her petite frame except style and even more confidence.  Shannon had long left the nerdy shy image of her middle school years and even, though quite affable, had apparently left the party girl image of her college years.  Now she was a powerful woman that commanded a room.  I suspect even the most confident man would be tested by her.  I know this as this had become my experience with the confident powerful Shannon I had shared a life with for some years now.

I know, it would have been nice to be writing now that I scored with Shannon that night.  But hell, I didn't even score with my Shannon (who of course is not really Shannon).  My Shannon and I had similarly grown apart.  While we toured our various conversations that night in tandem, in reality we were miles apart.  But for a few moments on a balcony outside the reception I did look into Shannon's (the real Shannon) piercing stormy blue grey eyes and I realized that really those were the eyes I had been looking into for the past ten years.  That in fact my Shannon had turned out so very much like the real Shannon or was it vice versa.  If you have read my Shannon's Stories you will know this is true.

In the end "one never knows, do one!"


Author's Note:  In writing this I could not help doing some google stalking.  Shannon (the real) is still doing great and looking great.  On her company "About Us" page she has those two letters "V.P" in front of her name just like my Shannon.  And Ryan just plugs on along tapping out blog post on that Potomac ridge.....

"But lacking something to write about....."

You say that on a Flash Fiction Friday? You are killing me man. Who am I, Shannon?

Actually it's a very poignant post, the 'What ifs' in our life can drive us a bit crazy. At my 20th reunion an old friend, a good friend, told my wife that "all the girls had a crush on him (me)".

I had no idea. High school could have been much, much, different.....

Thanks for the great music and the glimpse into the Ryan mind -what a complicated place! FYI - I have blue gray eyes. :)

@ Advizor - yes my comment about nothing to write about was probably more for poetic effect and perhaps negligent given a Friday. Normally a sexy Zombie apocalypse would be right up my alley.

@ Sassy - I'll have to check out those peepers some time!