First I have to apologize for the post in advance.  This is an intriguing picture and I am sure it will get many delightful responses but for some reason it did not move me.  But I committed to trying this weekly exercise and my motto is "no pain, no gain" so I endeavored on!
At first I saw some type of erotic fantasy perhaps based on a Conan like character or perhaps a flaming Bridgette Nielson/Red Sonja.  I used to enjoy those types of movies back in the day but as I said nothing was flowing for me.  I also was trying to see some epic story scrolling across the screen similar to Star Wars, you know “In a galaxy far, far, away….”  And maybe make it comical like “Space Ball,” you know “may the schwartz be with you!”  But still nothing flowing out onto the keyboard of my mind.
I then went back to my safety zone, the coming of age genre.  I was thinking that the picture could be some cheesy velvet painting on the wall of some brothel and would be some fond memory of a boy who got his first sexual experience there.  Or maybe the picture could be a key that unlocks some repression for some lost soul, kind of a Citizen Kane meets House of the Rising Sun (you know Rosebud, but in this case a cheesy velvet nudie pic).  But that sounded waaay to complicated for my simple brain and I had already gone down the coming of age road the past two weeks.
So finally I scrapped together this poor response:
FFF - Molten Ire
Fox News Alert! 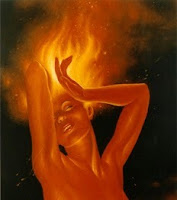 In unprecedented action, the FDA has directed Starbucks to change its logo from it's classic mermaid siren image from Norse mythology to the Fire siren Vulcania (pictured to the right).  The rationale listed was that the current image was false advertising and that the new image would better communicate the overoasted flavor of the coffee.  The FDA noted that a lot of industry insiders refer to Starbucks unaffectunately as “Charbucks,” as their beans are roasted well beyond simple carmelazation.
The old image (pictured here) depicts the mermaid siren, which it is said would tempt and seduce the seagoing mariner with an enticing song that could not be resisted.  The symbolism of the logo thus communicated the seductive qualities of coffee.

From mythology, the Fire Siren Vulcania would tempt wayward men with her beauty and then melt their peckers with the molten ire of the flaming herpes she would pass along.  This symbolism will communicate the fact that Starbucks roasts its coffee well beyond the point of any remaining coffee flavor.
By the way, I don’t actually hate Starbucks, they are actually a great company that I have worked with before but their coffee is a bit overoasted!  And yes I am a bit of a coffee snob.  But at least this combines two of my favorite things sex and coffee, and thankfully I have never had to deal with Vulcania! J
Have a great weekend!

Posted by Ryan Beaumont at 8:39 AM

Yum, sex and coffee ;) Don't be so hard on yourself; we all have off weeks. I wasn't particularly on this week myself, despite the picture seeming to suggest various possibilities.

What? I think it was good! You tickled the -oh please everyone, don't hate me- Starbucks dislike I have. I couln't help but giggle a few times. :)

That's two hilarious takes this week, both of them taken in directions I would never have considered meself. It's really fun to host this thing sometimes. Thanks for playing along!