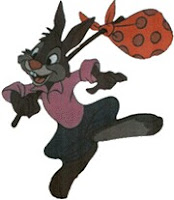 So I'm back home from that Magical place ruled by a Mouse and am now driven to write about it!  I always said I wanted this blog to be more than just sex.  Of course, it's almost never about sex, but I hope it's educational :)
So here is Br'er Ryan's Guide to Disney:
But first I have to throw out some cautionary quotes for us philanderers from one of my favorite characters Br'er Rabbit (in case you were wondering br'er is an affectionate term for brother/friend).  I pondered these while riding Splash Mountain, themed on the Song of the South character.
"You can't run from trouble, there ain't no place that far."
"Mind now, Br'er Rabbit, better mend your ways, you's headin' for trouble one of these days!"


And please don't read into the non-PC'ness of Song of the South, I definitely get it that many of the portrayals in the movie can be offensive but don't forget that James Baskett (Uncle Remis) won an honorary academy award for his work, the first given to an African American.
The Rides:
Animal Kingdom -  Regardless of what you want to accomplish once in the park go immediately to the Kilimanjaro Safari.  It's a must do and the line grows quickly.  Also, animals are more active in morning so this is best to do early.  After that do Expedition Everest as much as possible, you can Fast Pass this and it's awesome!  Once tired, take the kids to Dino Land or the petting zoo (Affection Station) and let them play in the climbing area.  It's safe, corded off, shady, and a good way to occupy them while you rest.  The dinosaur ride is OK, but not worth a major wait.  If your a guy Pocahontas was at the Conservation Station and she is Smokin' Hot!  If you need more air conditioned entertainment the Nemo show is good.  Overall the park is very shaded and beautiful and simply fun to walk.  Be careful on "It's Tough to Be a Bug," its pretty spooky for young kids and those that don't like creepy crawlies!  And don't go on Kali River Rapids unless you wish to get soaked.
Epcot - Rides are not the big thing here.  The one must do is Soarin,' it is fantastic!!  I like the Maelstrom in Norway (or maybe it was the cutie from Oslo that ushered us onto the ride).  The test track is a great ride as well.  I passed on Mission Space, call me a pansy but if I want to test the condition of my heart, ejaculation needs to be involved :)  I'll talk about food later, for me Epcot is about the FOOD (and of course the cute blonds in Norway or well, the cuties anywhere)!

Magic Kingdom -  I got 2 words Splash Mountain - great ride.  We also love The Big Thunder Mountain Railroad and of course Space Mountain is always a must do.  Mix in Small World, Pirates, Mickey's Philharmagic to get some rest and air conditioning throughout.  If you want characters you will invest a lot of time waiting.  A character meal is a better way to get pictures without melting in the sun.  The shows at Cinderella's castle are fun for kids but understand you are out in the open like a stick of butter in a frying pan so be judicious!  And for me a great end to the day was seeing a lovely young brunette character cast member with a sultry attitude playing Pirate Elizabeth Swann outside of Pirates of the Caribbean - WOW, strand me on a deserted Caribbean island with her any day and I'll die a happy man!  :)

OK, enough for today - tomorrow (or maybe Sunday) - the Food!

Bye for now.
Posted by Ryan Beaumont at 4:06 PM

Thanks Ryan! I need to plan a Disney trip soon so these are great tips!

I loved the Tower of terror? I screamed like a little girl. :)