Hey, It's Tax Day in America again - the ultimate Anti-Holiday!


The lyric title above is from "Why Can't We Be Friends" by the 70's power group War.  It was the title song of their album released in 1974.  The album also included that song "Low Rider."  Perhaps a better lyric from that song to describe me would be -

"Sometimes I don't speak too bright but yet I know what I'm talking about....."

I actually prefer Smash Mouth's version of the song recorded a few years back, proving they are more than the group that sang the Shrek soundtrack song.  I love the addition of the ska to the funk (almost a punk-funk or p-funk) and the accelerando and back!

Last year I wrote a speculative rant on tax day.  So with rage in my mind and that lyric above in my heart let's think about our tax dollars a little and what we should be doing!  Of course any rage I might express here is complete BS since I mostly tend to vote for those blue lefty dudes that supposedly want to raise our taxes.  Well, perhaps not mine since I fall just short of that "Buffet Rule" hurdle rate.    :)


But before I get to any potential points I might be making today let me diverge (perhaps within the next few lines you'll stop reading and won't discover I don't have any real points :).  To be honest I started this post probably 2 weeks ago when I was 1st lamenting over my taxes.  It just hasn't gone anywhere until today (well really yesterday - Monday).  As I started to drive to work today (yesterday/Monday) I realized I was getting major blockage on ideas.  I started to think about what a torrid pace I had been at with writing and decided I needed a break.  In fact I have already been thinking about how to blow off this summer; I mean take a pace and theme change like spend a few weeks just rehashing old stories.  Hey, even bloggers who don't collect any $'s off their page need a break, right?!  But this wasn't getting me anywhere, but it is therapeutic to bitch!


Anyway, so as I was leaving the neighborhood I turned on the radio.  Of course the radio had been left to Disney as usual.  I started to punch the button to switch to First Wave but heard the opening lines to that Jessie J song "Price Tag."  I really actually love that song, in fact I used it as the title lyric to my 100th post.

Then as I started listening and enjoying the song it hit me.  That song is kind of like a treatise on balance in life.  And I got to thinking this year I achieved almost the perfect balance on taxes.  I know you think that is stupid but for a guy that has an MBa and took tons of Finance and Accounting in college that is excitement!


Wtf does that mean Ryan and why should I care?  Well first, I only had to send the IRS a check for about $100 this year.  You see two years ago we got "boned!"  I think we owed just over $2,000.  That was the year Shannon was interim VP for her company so she made a "poop" load of money along with a fat bonus.  So the first thing you do if you don't want to pay so much in taxes is not make a much.  So Shannon didn't stay on as the full time VP thus dropping her back to the old smaller wage (good first step)!   :)


The other thing is that I went back to my I-9 and started getting more taken out.


OK so just on the chance that any of you are still reading after I filled your eyes with boring tax accounting here is the point.  Isn't life best when you have just the right balance.  Putting in just the right amount so that you don't have to pay too much more in or get too much back out!  I mean who wants to give the Fed an interest free loan?  Well, saving those receipts is a good idea as well so you can write off any and everything like business miles ("hey I though about work once and answered an e-mail from m I-Phone while I was at Disney so I can't write the whole trip off right").


Yeah, in life or relationships if you find yourself paying in and paying in more and more it's probably time to get out.  And if you are getting too much back then maybe you are the problem!


Yeah, take that on in life, Ashley Madison, blogging or whatever else you do.  Decide your price ahead of time and pay in the right amount and get the right amount back.  And don't be worried if you pay in just a little bit extra (say $100), you'll get it back somehow.  After all, what's $100 among friends anyway; I know Mr. Pres will spend it well!  Maybe he can use my check to finishing paying off those ladies in Cartagena, I'm sure those poor agents really needed that stress relief!    :)


Oh and after I finished listening to that Jessie J song I did switch over to First Wave and they were playing The Safety Dance by Men Without Hats.  So I got a two-fer!  Perhaps my next theme on here should be....

"And you can act real rude and totally removed, And I can act like an imbecile...."

Actually I am not sure if I have a whole lot of things to say about taxes but I will try to pick up on that theme of "why can't we be friends" and go off the deep end with some radical moderate ranting about politics.  Maybe if we could be radical moderates we could all be friends! 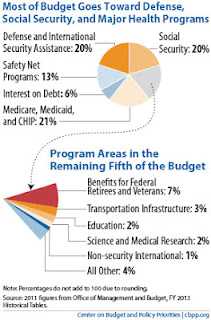 I guess I have two points and they both revolve around that War and Jessie J song.  First, while the our national debt as a % of GDP is the highest ever since WWII (about 65%) our net interest payments as a % of Federal outlays is smaller than at any time since WWII (about 6%) and has dropped significantly in the last two years due to very low interest rates.  So even though we owe a lot we are fairly liquid.  So let's just "be friends" and "slow down and enjoy right now."  'Cause things are never as good or as bad as they seem.  What we really just need to do is be patient and ride this thing out; it's going to take a while.


Second point - don't be "penny wise and pound stupid."  Take a look at the pie chart to the left.  As you can see the big ticket items are social security, defense, and Medicare/Medicade with Safety Net programs a distant 4th.  So while I don't like sending $'s to countries that shoot back at us clearly foreign aid ain't the problem.  In fact saying we need to cut back on discretionary spending is like saying "I'm going to stop dropping those pennies into the Ronald McDonald House box at the Micky D's drive-through as a way to pay down my mortgage." The math just ain't there.


While the quickest way to cut the deficit is defense, remember those soldiers are part of that cost and they earn a salary and buy groceries and stuff with that salary.  And defense technology when not spent on $600 toilet seats is some of the best stimulus out there.  So do we whack into Social Security and Madicare/cade?  Sure, grandma has lived long enough maybe she should just move over and get on with dying.  Well, you'll probably think different if it's your grandma or if you are grandma.  So what is your second point Ryan sounds like you are a typical politician who doesn't want to cut anything; pay everybody off and get elected.  Well the bottom line is there is no quick fix and the fix is in fact in the harmony.  Let's peel back a little aid to Pakistan but be mindful that humanitarian aid may be a better key to Democracy abroad.  Let's let our inventory of bullets and bombs go down a little but let's keep up on technology so we stay ahead of the game and certainly take care of our soldiers.  Let's try to figure out a way to actually have "healthcare" that makes us healthy and not symptom-care that incentivizes reactive medicine.  Let's win on the margins, kind of like paying an extra $50 on your mortgage each month (it may only take a few years off the life of the debt but on the long term you'll save $1,000's).


In short let's pay a fair share but have a little harmony and be friends (and enjoy right now)!

Oh, and take some incentive from our friend Donald here doing his patriotic duty as he sends off his taxes!


And if you are wondering why Tax Day is on Tuesday, April 17th this year, it's all do to Abe Lincoln.  Abe Lincoln apparently created the Income Tax (proving Republicans are bigger taxers than Dem's)  :) but also created Emancipation Day on April 16th which hit on a Monday this year when the 15th hit on a Sunday thus giving us 2 extra days to get that 1040 done!  Thanks Abe!

Posted by Ryan Beaumont at 8:44 AM

Ok, Ryan, I'll comment. First, I'm not going to comment on most of what you said because you know I disagree with perspective. But I will talk about what you call "balance."

I find it interesting that you think it's great to make sure you get enough withheld so you don't have to pay much more when tax day comes. *I* find it offensive that the government gets to hold onto MY money, interest free all year. I'd rather hold onto it and make some interest on it before turning it over to be squandered by public officials.

It's interesting that the government will hold our money without paying interest on it, yet if we're a day late, an exorbitant rate of interest and high penalties kick in and keep growing. This is "government *for* the people?"

Oh Dear Kat I was really hoping for "Ryan you ignorant slut" from you! :)

As an MBa with a BS in Finance I of course say to you yes I would rather keep my money and put it in a CD/Money Market and at least get my 3% and then pay quarterly.

But as a human being I say who the hell ever has the discipline to save enough money to be able to cut a check for $20K on April 15th! :)

That is why I say Philosophically it is best to net to 0.