So today is the day of reckoning.  The day I finally come out.  You see the past year and a half I have been living a lie and blogging is just a front.  I am in fact a plant from the Santorum campaign to out this disgusting a-front to the American way of life that is sex blogging.  I have been carefully crafting stories to engender empathy in hopes of attracting you fools into my web of deceit.

And now I will reveal the poor fools who have fallen into my trap!

Elle from Sex in the Shitty - as you can tell from her post yesterday she is harboring latent feelings for women.  And that is because she is in fact a former model living in LA and is currently romantically linked to Ellen DeGeneres.  Got you Elle!

Have you noticed that Kat from Prowling with.... has shown a great deal of interest in Mitt Romney.  Do you think that is just a passing fancy?  NOT!  No she is in fact Mitt's secret second wife, sister-wife to Ann and living in seclusion in Moab!  Gotcha Kat (and Mitt) - how many Cadillacs do you drive?

Additionally we have found out recently that the PWK team has taken out a $1 million insurance policy from Lloyd's of London on Cara's tits!

Gertie from Throwing Hammers says she is just a simple single girl looking for a guy but she is in fact one of those young chicks Anthony Weiner was sexting!

Sassy from Same Sassy Girl would like you to think she is a Red Sox fan and a suburban wife but in fact she bears a love child with Alex Rodriguez (oh the shame).

Kitty would like you to think she just thinks about sex all day.  Ever see that movie Prizzi's Honor, you got it.  Sex kitten is just a front for Mafia hit woman!  Be careful, be very careful.....  Of course I could have this one wrong I also have some insider information that she may really be Deanna "the blast" from Jersey Shore. 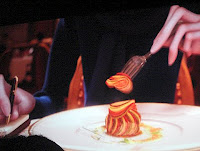 France from Sometimes the World Begins would like you to think she is just a hockey fan from Canada. But she is in fact the famous French food critic Anton Ego.

You think Luna is just a lusty DC lady?   No way, Drake is really a composite character of all those K Street Senators she has been "doin'" all these years.  She is in fact the concubine of Grover Norquist!

Red Shoes would like you to think he is a simple mild and absent minded professor from a small school in the south but he is in fact the former bass player for Badfinger.

Who are those Doing the District girls?  Well they are in fact a consortium of "Big Sugar" and "Pink Slime" execs just trying to get you to buy their product.

Pony Boy would like you to think he is a mild mannered husband and father from that suburb to the north of us.  But in fact he is self help guru and life coach Tony Robbins.

Vanilla Mom - she is really Pistachio!  Tempting Sweets - really a sour gummy bear!  And Kim the Errant Wife is in line to be Newt's next wife.

And I am as always faithfully "Kenny Fuckin' Powers!"

And if you don't believe me check your calendars today!!!!!


Love that Martina song.  Would you believe I would like to show her some country comfort!  Now that ain't no April fools!    :)

Very cute. The funny thing is I am closer to the mob than you think ;)

Sorry I have been so bad about keeping up and keeping in touch. Hope all is well.

How did you guess? ;-). What you got wrong is that I really married Ann, not Mitt.

lol Too funny. Gave me a good laugh. :-) I've never been with a senator, but I did have a fling with a high-level...nope...I swore I would never write about it!

@ Oh Kitty, that sounds like a Lifetime movie "Mafia Madam of Wisteria Lane"

@ Sassy - but I see you didn't denigh having a child with A Rod. Can I infer that you hide hidden lustful feelings for that dastardly Yankee!

@ But Kat you didn't say how many Cadillacs you drive?

@ Luna - Oh come on this is the place to tell as long as you are really not one of Bin Laden's wives!

Imagine how hard it is to get a date after being involved in WeinerGate...

Too funny Ryan, great Title and Yesterday was a Day of Reckoning in the land of spear and Hammers as well.

Close, very close, but you see I have an innate need to be the centre of attention based on my wit and bad ass intellect. Ellen would be way too much competition for me. However, I might consider dyking it up if I had a shot with Portia de Rossi. ;)

Sorry I missed this, a little late to the party on this one, but well done nonetheless.