Take Me to the River - Part I

Did you happen to catch in my Sandee post about the winter when I said something about a secluded island in the Potomac?

Of course not because I didn't talk about sex in that post so you just skimmed right over it!  OK, I probably would have to, it's OK.

Anyway, all winter Sandee and I had talked about canoeing again.  I really wanted to, my pride was on the line.  But this time I was going to be smart and go wherever Sandee told me.  She had talked about a place on the river that was much more placid than that place below the dam where I took my spill.  More importantly she talked about an island that one could paddle out to.  That sounded like my kind of place or more importantly the type of place I wanted to be with her!

So on a sunny Tuesday we decided to meet at her place on the river to go for a boat ride.

We shoved off in our canoes and turned up river.  The first 50 yards was fine and I was really enjoying the atmosphere.  Sandee looked gorgeous in a bright red tank top.  Sandee is small, about 5'4" and maybe around 120#'s but she has a great figure.  And her long blond hair was beautiful in that spring breeze.

As we paddled up-stream we did go past some rocks.  These rocks did create a little current in the river and I had to paddle a little more rapidly and forcefully to go forward.  As I was doing this I wobbled a bit.  I thought for certain I was going to go down again.  But this time I didn't try to over-compensate and worked with the current.  It was only about 20 yards before we got through this more challenging area (at least for me).

Past this we took a right turn down a gentle canal which is where a little creek runs into the Potomac.  We paddled down this canal and enjoyed the breeze and the flowers that were starting to bloom on the banks.  Yellow is Sandee's favorite color and there were a few Black-Eyed Susans poking their heads out.  After about 30 minutes Sandee paddled over to a secluded bank for a break.  I had brought some PBJ's and some water so we had a snack and just relaxed.  Of course there was some kissing involved as well. 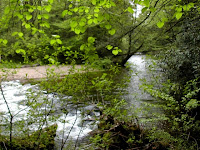 The challenge was that while this was very peaceful it was not completely secluded as we had some neighbors, a delightful older couple romantically fishing about about 30 yards away.  I'm slightly compelled to do a faux post now about Ashley Madison and Hillbilly Handfishin' but I'm feeling a bit lazy so I'll have to put that on my ever expanding "to do" list for the future!   :)

At this point I brought up "the island."  I had just been following Sandee and we had not discussed it.  She said it was just past the canal.  She asked if I had time?  I looked at my phone and it was about 3:30 pm now.  I had some time but not a lot.  But I knew I wanted to see this place, scope it out, and decide if this was a place for a romantic encounter that would be decidedly "bloggable!"  Just kidding, though I really did want to see it.  It sounded very interesting and if I got laid out of the mission - all the better!

So we paddled back down the canal and turned right at the Potomac.  The island was maybe 200 yards up-river.  It was fairly windy that day so one did have to work pretty hard to get up-stream.  We made it though and parked our canoes on the banks and Sandee led me around the island to a trail that led to the interior.  The island was small, maybe about a half acre.  What was perfect though is that it was tree lined around the exterior but the interior was fairly clear and had the "tell tale" signs as a place kids go to campout (and screw) as there were some fire pits and a few empty beer cans around.  There was a tire swing and a rope swing that could go out over the river.   We poked fun at each other joking that a killer tribute from the Hunger Games was behind some bush ready to jump out at us and could we survive out here if we were hiding from the Capital Peacekeepers!   :)

All in all a wonderful place that Huck Finn would have been proud of.  Btw, Huck Finn is one of my all time favorite books along with Catcher in the Rye (I guess I feel a certain affinity with Huck and Holden).  Oh wait, I don't read so that must be BS!  Anyway, I certainly did feel at home.

The challenge was that it was now close to 4:30 pm and we had about a 30 minute paddle back to our car, I was about an hour from work and the gym to change, and pick-up for daughters was in about 2 hours.  Time to kiss and enjoy the breeze for a few more minutes but not enough time for, well - you know!

I thought to myself, this story screams for a part II.  So we left and decided that we would come back as soon as possible.

And as if you were in the Dome of the Hunger Games, magically condoms, wine, and cheese floated down with a tag from Riff your District Coach of the Games. :)

You knew what he wanted you to do with them. You smile at the audience and get ready for the challenge. ;)

I'm disappointed in you Gert, you didn't say "may the odds be ever in your favor!" :)

And yes just in case you hadn't noticed I'm a District 11/12 kind of dude!