Thank you to Ms. B for submitting this week’s TMI Tuesday questions.

1. Who is your closest celebrity look-alike? And, who do you think is sexier, you or the celeb?
The comparison I like the best that I do think sticks is Harry Connick.  Sometimes I do get that vacant "why am I here and what is it that we are doing" look as if I'm Warren Beatty.  I don't sing like Harry though so I'd be hard pressed to say I'm as sexy as they are.
2. Who is the hottest male AND female celebrity you can think of? And, if the opportunity presented itself would you have sex with them?

I've mentioned a few times in this blog my all time celebrity crush is Jennifer Connelly.  She is gorgeous, stylish, and comes across as very intelligent.  Since we are in the political season and I'm a real politics dweeb I'll say my other crush is Nora O'Donnell.
Male star?  Hmmm.., have not really thought about it.  How about we go with Harry Connick, he looks a lot like a really good looking fella I know!    :)
3. What celebrity do you fantasize about, but wouldn’t admit it to your friends?

Well I don't really talk about fantasies with friends as I'm a man in my mid-40's and I suppose that would be gross.  Lately I've really been taken with this conservative political analyst on MSNBC S.E. Cupp.  I'm a left of center guy so I guess I would be crossing over with her.  Now that I thinking about conservative women I think I'd be happy with about any of those fine looking ladies over at Fox News!  Except that Michelle Malkin, she's hot but I imagine her bitching about illegal immigrants right as I'm about to cum!   :(
4. Have you ever watched a leaked celebrity sex tape? Who was it or were they and what did you think? What would you have done differently if you were in the video with them?  No, I have not.  I have come across a sex tape before but it was not celebrities and it was not fun to watch.
5. If you are in a relationship, is there anyone your partner knows that you have the ‘hots’ for and they give you the okay to be intimate with? Who would be there’s?  I may have told Shannon but I doubt she was listening nor would be concerned with anything I do not involving purchasing something for her.  My wife has always been pretty open about her attraction to Keanu Reeves.  I could also see her with John Legend (she's always had a taste for musically inclined guys).  She'd probably like Riff Dog for that matter!

6. If you could have dinner with anyone in the world, who would you choose and what would you give them for dessert?  Bill Clinton, he would be fascinating and we would be eating BBQ Ribs (this is a dream right, I know he has gone vegan).  We would be on Beale Street or at Dreamland BBQ (in Tuscaloosa, AL).  We'd have Banana Pudding for dessert.  I guess for a female it would be Nora O'Donnell (my crush from above), she would be interesting to talk to.  Her husband is a DC area foodie like me.
Bonus: If you were offered the million dollar indecent proposal, what would your answer be and why? 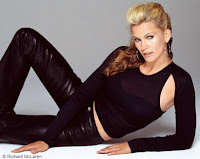 Posted by Ryan Beaumont at 9:50 AM

Email ThisBlogThis!Share to TwitterShare to FacebookShare to Pinterest
Labels: TMI

@ J & J - Yeah I kind of imagine Miss Delaware bitchin' about illegal immigrant as well mid-sex; not a good image! :)

Number 3 made me laugh so hard I started snorting. She really is quite bitchy, isn't she?