You must really be wondering if I'm a total fruitcake.  But really those are words to that Donovan song "They Call me Mello Yellow."  I heard that song the other day and decided it's been awhile since I did a food post and it would go quite nicely as a lyric title for this dish I recently made.

BTW, for you ladies out there it is rumored (based on wiki as always) that this song, "Mello Yellow," may be about vibrators ("electrical banana").

Oh, and to follow up on my post from Monday about Shannon and style.  Last night I was driving home with my daughter and she wanted to play a song for me on her IPod.  Apperently she is now into Girls Generation, a nine-member all girl South Korean pop group.  Apparently Korean pop is the big thing now ever sense Katie Perry tweeted about Gangnam Style about 2 months ago.  At least that is what Shannon says citing an article she read in the New Yorker.  Anyway, my girls have had the neighborhood in Gangnam Style for over a month now.  But what do I know, I'm quoting lyrics from a burnt out 60's Folk singer!  Too bad Shannon's Oppa has no Gangnam Style!    :)

Anyway, this dish below would be a great side item or even a center of the plate entree if you are one of those vegetarian types.  For me, I'd prefer this along side of some nice Flank Steak that I marinated in Italian dressing and Peperoncini over-night and then threw on the grill. 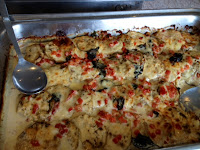 As always my intent is to do it with ease!

*     Bring about 2.25 cups of water to boil and slowly wisk in 1 cup of Basmati Rice.  Reduce heat to a simmer.  Add about 1 Tbs of Citrus infused salt and a tsp of black pepper.  As the rice is almost finished add 1 Tbs of butter and a pinch of Saffron.  Remember to be judicious with the saffron as you may have to take out a second mortgage on your house for a second pinch of Saffron (it can be real 'spensive).


Hey, that little shuffle Psy does in the Gangnam style video kind of looks like the steps I do when I grab a hot casserole dish by mistake!   :)
Posted by Ryan Beaumont at 9:02 AM

This is a first... a recipe this genre of blogging! I love cooking, not that I am a cook. I will have to try it sometime!

This looks yummy and sounds amazing with flank steak!