Up on Cripple Creek, She Sends Me

At Cripple Creek with Shannon

Shannon and I were not actually in/on/at Cripple Creek on this occasion but we were in the water and we almost got into hot water so the lyrics to this song by the Band seem to fit.

﻿
On one particular weekend that Shannon traveled down to see me I decided that we should go for a walk around this particular lake in the area.  I guess it was actually a damned up creek as it looked like a lake but everyone referred to it as ****** Creek.  We can stick with Cripple Creek for today though.  Shannon as always was gorgeous.  This was back in her Auburn hair days and she wore this short and tight plaid skirt.  It kind of said down home casual but highly *uckable!  I always loved that dress!  She had a bikini on underneath just in case we decide to swim. 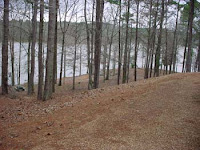 So we drove out to Cripple Creek for a walk and a possible swim.  We walked about half way around and came to a boardwalk that went out onto the creek/lake.  At the end I just stood with my arms around Shannon, she leaning back against my chest and we breathed in the warm summer air on the late afternoon in July.  The smell of her hair as if shimmered past my nose was hypnotic.  I longed to bury myself into her soft body and lovely smell.  I rotated around and began kissing her.  This was a remote area and nobody was around.  It was getting late and this space was ours.  I moved my hands under her dress to her soft behind and moved inside.

She protested as I moved inside of her panties.  She said "someone might see us."

I told her "I didn't care" with what I am sure was a slight smile.

She said "I don't want to get you in trouble."  Did I mention this was a very small town where everybody knew everything about everybody?  She was probably right, me getting caught fornicating in public would probably not be a good thing and would be the news of the town the next day.

I told her, "why don't we go behind a bush," I really wanted to be behind her with her gorgeous body spread out before me.  She said no.  Shannon can be a wildcat in a nice $250+/night hotel room but out in nature not so much.

We walked back to the parking lot but passed in front of the beach and swimming area.  It was getting close to dusk now and nobody was in sight.  I took off my shirt and shoes and walked in.  I looked back and motioned for Shannon to come in.  Reluctantly she shimmied out of her dress revealing her skimpy bikini and walked in to meet me. 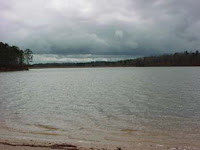 We waded in about chest deep, near the buoys.  Once there I pulled her close and kissed her.  I reached down under water to pull her legs around my waist.  She latched onto me.  We kissed deeply, her hands clutching the back of my head tightly nails slightly into my scalp.  The feel of her tight almost desperate hold was driving me crazy.   I pulled her waist close to mine.  She slowly started grinding against me.  I knew then that she wanted sex but had been apprehensive.  I moved my hand inside her bikini bottom.  She sighed as my fingers probed the outside of her.  I slowly moved her bikini bottom down.  Shannon did not protest this time but simply said "can you do this quickly" and I did not hesitate.

I pulled her bikini bottom off and shoved my trunks down.  Shannon quickly moved her legs around me again.  Even in the water I could feel how wet she was.  I easily moved into her and she grinded against me gently but firmly there in the water.  We smiled at each other and she said "does that feel better?"  I nodded in appreciation.

But as I was enjoying the moment I saw a car move to the crest of the hill where the parking lot was located.  Then lights flashed.  A speaker crackled "the beach is closed, leave the premises immediately!"

OK, ok we're done we'll leave I thought to myself.  I reached down and pulled up my trunks and reached into the pocket where I had put Shannon's bikini bottom.

Luckily, I had left a towel on the beach.  I quickly swam then walked to the towel and brought it back to Shannon.  She gingerly put the towel around herself as she walked up out of the water.

The policemen frowned but crisis was avoided.

Posted by Ryan Beaumont at 5:48 PM

oooh! You two were so hot! Adored this story.