A little secret about my blog, I tend to work off a syllabus. Yes, I am in fact an (E/I)NTJ (Myers-Briggs that is). So I will plan my posts at least two months out. I know you are saying "Ryan, your blog seems completely random I can't figure out what the hell is going on?" And of course you would be right but you are running right into my consistency or as I like to refer to it "organized chaos." :)

So in my (organized chaotic) mind I had not envisioned a Halloween post this year for some reason. But then I saw that movie ParaNorman and loved it. The song at the end of the movie is "Little Ghost" by Jack White and the White Stripes. I liked the song so much that for the first time I decided I had to configure a post around it. So here it is. Consider this kind of like that Kenny Rogers' song "The Gambler." People liked the lyrics so much they decided to write a movie around it. Of course it was a "made for television" movie which means it was super-sucky. So I guess it makes sense that I would write a super-sucky "made for Ryan's blog" post out of those "Little Ghost" lyrics! :)


﻿﻿﻿﻿By the way I like Jack White for a number of reasons, he was the mandolin player in that Cold Mountain movie a few years ago. I wrote a post about that once.
But I guess I better get on with my recipe for today. So since it's Halloween this week let's go with.... 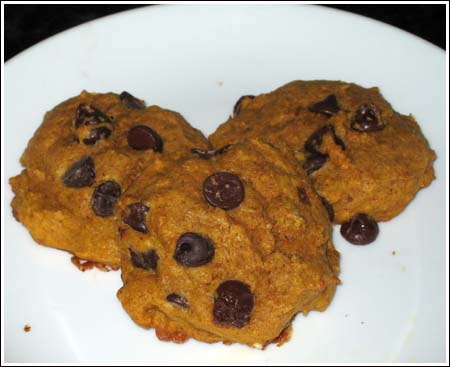 *     In mixing bowl, mix cream, butter, sugar (brown and white), and salt on medium speed until light and fluffy (3 to 4 minutes).  Beat in egg and vanilla until fully combined.
*     Add flour, oats, baking soda, and cinnamon and stir into mixture in bowl.  Stir until completely combined.
*     Stir pumpkin into mixture in bowl until completely combined.
*     Fold chocolate chips into cookie dough.
*     Sprinkle flour onto kitchen counter-space.  Roll cookie dough gently onto floured counter.
*     Cut pumpkin shapes out of dough.  Can do this after cookies just out of oven as well.
*     Place cookies onto greased baking sheet.  Bake at 350 degrees for 12 to 13 minutes.

So this years Halloween trick (on me) is another "famous" ENTJ. And you know I saw a videotape of myself delivering a presentation about a month ago and DAMN if I didn't cringe when I realized I sound just like him! Hey, but I think I'm funnier, and no I don't think I created the blogoshere! :)

The cookies look amazing Ryan, can't wait to try them!

I am a huge fan of pumpkin bread and this recipe just gave me the idea to throw in some chips. :)