That's How She Knows You Love Her 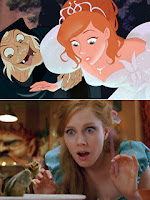 Giselle signed up for Ashley Madison on a Friday afternoon but then got caught up in another busy weekend of taking care of Robert and Morgan.  By Monday she had hardly remembered her impulsive action.  But late in the afternoon she did remember and thought she would take a look - "I wonder if anyone is out there, a lonely gentleman just looking to find another lost soul out there to sing with and to adore?"
So what do you think she found?  Yep, apparently there were 300+ gentlemen in greater NYC that were in fact looking for NoMorePrincess!

First Giselle thought "what are all of these winks and key requests - I don't have a key to the castle?"

Then she started taking a look at some of those pictures.

"Oh my," she thought, "showing me your winkie is NOT a proper way to introduce oneself to a lady!"

But the attention was gratifing and she had an hour to kill before going home so she continued to look now focusing on the few actual thoughtful messages and ignoring winks and private access pictures.

She finally found one that actually looked interesting.  It was:

His note read as follows:

If you like Pina Coladas, getting lost in the rain, if your not into yoga, if you have half a brain..."

Just kidding but if you would like to escape with me to the Dunes of the Cape (or just the Hamptons) I would love to hear more about you!

I enjoyed reading your profile and I would like to have that feeling of jumping off a cliff with someone special!  And no apples :)

Please take a look at my profile and let me know if I can share anything more about myself with you.

Giselle thought to herself "this Mr. McDreamy does sound, well dreamy!"

McDreamy said:  I want to share passion, not just someone on the receiving end of me, someone who is in rhythm with me, who is willing to lead and to follow and explore where we can collectively go....

Giselle said:  I want to be treated like a lady but a lady that you just can't wait to see; gasping to hold and to ravish and discover every part of....

It sounded like they both wanted the same thing which is to say not the same old thing they were currently getting in their relationships.  So with that they decided to meet at a bistro McDreamy knew of in the Village that would be far enough away from where each worked and lived.

Giselle was excited.  McDreamy said he would be coming from work so he would be in a grey suit with a blue tie.  Giselle said she would have on a tight form fitting yellow dress that would give great contour to her well formed body (and added a very thin black thong underneath)!
As McDreamy walked up to the maitre d' he saw her.  God, she was hot!  Long red hair (strangly just like Giselle), long thin legs (he would like to lick up and down), and what an ass - almost ready to pop out of that dress!  He tapped her on the shoulder and said "my dear princess, it is I ..." 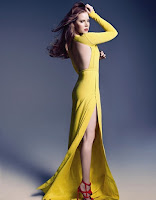 Giselle's heart seized as she heard those words from that familiar voice.  She turned and yes it was Robert!
"Oh Robert!"

They both said in tandem "What are you doing here?  Are you (Not Princess/Lawyer Up)?  I don't know what your talking about?  OK, yes I am but......wow you look fabulous!"

And then they laughed.


Inside the restaurant a familiar song was playing... "It was my own lovely lady and she said, 'Oh, it's you,'
then we laughed for a moment, and I said 'I never knew.'"
After lunch Robert and Giselle made love all afternoon, on every piece of furniture, and in every room (except the bed and bedroom)  :)  It was more than just that first time feeling, it was a re-awakening.  And it was wonderful to be re-ignited with someone who they cared for so much!
And they lived happily ever after with perhaps an occasional hiccup!
Posted by Ryan Beaumont at 8:00 PM

Email ThisBlogThis!Share to TwitterShare to FacebookShare to Pinterest
Labels: AM Theater

Silly me. I didn't expect that ending or see it coming. But it actually was quite a nice way for things to happen. Rather a fairy tale though as in real life that probably wouldn't have occurred
or been so happy.

I know it is corny but how I do love this song! Fun story.