What She Called a Chevy was a '66 Corvette

Or 'Cause if I was an Oscar Mayer Weiner, Everyone would be in Love with Me


So the 2 titles are a bit disorganized.  The lyric above is from Private Malone, a minor country hit when it was released near 9/11.  I think it is a nice way to remember those who serve in the armed forces over this holiday weekend.  Additionally, the song very succinctly describes the reality and sadness of lost dreams when young men and women are asked to sacrifice for their country.

But Memorial Day is also the figurative start to summer and of course the beginning of the grilling season.  And of all foods to grill, hot dogs are at the top and a topic I have learned a lot about over the years.  Hey, everyone should be an expert on something even if its as mundane as hot dogs :)

So here is some history and regional information about one of America's favorite foods.

The hot dog came to us from Germany and Austria where a frankfurter is a pork sausage served on a bun and a Weiner ﻿which is a similar Austrian food.  These foods started showing up in America in the late 19th century with German populations on Coney Island and in St. Louis.  While originally referred to as a frankfurter the term hot dog came into use around the turn of the century.  The term hot dog became more prominant during and after WWI due to anti-German sentiments in the US.  The hot dog early on tended to be a working class/portable food ideal for street vending.  Because of the need for portability the hot dog was served on buns early on to patrons who needed a quick bit on their lunch break.  The hot dog was popularized at the 1904 St. Louis World Fair (along with the ice cream cone - another story).  It showed up a ballparks just before the turn of the century at St. Louis Browns games.

As the hot dog became more popular it also began to get regionalized.  So here are some variations on how hot dogs are served around the country. 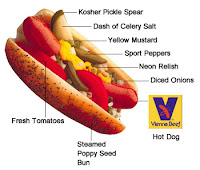 My #1 favorite is the Chicago Style Hot Dog.  The Chicago style dog is all beef and is steamed or boiled (until it floats), served on a poppy seed bun, and is topped with yellow mustard, chopped onions, a very bright green pickle relish, a dill pickle spear, sliced tomato, and a dash of celery salt.  This is called "dragging through the garden."  And of course the brand has to be Vienna Beef (absolute best hot dog in the world).  The style of serving developed around Maxwell Street during the Depression in Chicago and was a cheap and portable way for working class Chicagoans to get a quick and complete meal on the go.  But now just look for the greasiest looking place that might be located around the El and you will probably find a great dog!

A New York hot dog should be served with spicy brown mustard and sauerkraut.  The most famous brand is of course Nathan's that started as a small hot dog stand on Coney Island and now hosts the World Hot Dog Eating Contest.  Downtown and along the streets of Manhattan you are more likely to see Sabretts at the numerous carts.  I have to admit Nathan's hot dogs are not my favorite, a bit bitter to me.  Sabretts are OK, I would say from this part of the country I prefer Hebrew National or Berks (from PA).

A Southern Style hot dog is served with chili (no beans) and cole slaw.  Even though I am a Southerner by birth, they are a bit too sloppy for me.  But the best place for a Southern style hot dog (foot long) is Peaches at Myrtle Beach!

Maine is famous for their red dye #2 hot dogs in a natural casing.  They may give you cancer if you eat too many but you'll die happy, they are great!

I have to confess I don't know much about regional hot dogs beyond the St. Louis arches so if I've left anything out from the great west let me know.  I know Dodger Dogs are famous for the steamed bun.  And the Happy Days carside style service developed in places like Modesto (Mel's Dinner) but are more know for burgers.  I'm sure somewhere in the land of Fruit and Nuts out there they have put hot dogs in sushi or some other new age type format :)

So for now, enjoy your weekend - Happy Holiday!

And here is Private Malone.

Posted by Ryan Beaumont at 8:58 AM

Email ThisBlogThis!Share to TwitterShare to FacebookShare to Pinterest
Labels: Food/Lifestyle

I love a juicy wiener.

I'm a fan of letting the sausage speak for itself. Just a bit of mustard, maybe some shredded lettuce... and a beer!

Have a great long weekend!

I grew up eating hotdogs with mustard, relish and chopped onion. Sounds like I definitely need to try one Chicago style!