Sorry to do that to you on the post title.  However, Disney Channel has sodomized my ears with that Willow Smith song over the last month and the lyrics are drilled into my head so I thought I would share them with you as I think they fit today's post.  And now you can carry the song with you in your mind all day!  :(


And what better way to celebrate Mardi Gras than with a food post.  But first I have to say my first intended food post was last Mardi Gras (I had written one food post previously on the fly so to speak).  That on the fly post gave me the idea to post some easy recipes from time to time.  I have enjoyed them so I continue.  My point is always that preparing food is not nuclear physics; it should be fun and easy!


But getting back to last year's Mardi Gras post, I put more time into that post than any post I have ever done.  It was one of my favorites of all time.  In fact last summer I put it in my Top 10 favorites.  But you know what?  Not one comment on the original or the follow up Top 10 post!  :(


Just goes to show you I have no concept of taste!  Of course you could reverse that trend by commenting here or going back to last year's post and commenting after reading to the end.  I promise there is a funny Cajun' joke at the end! 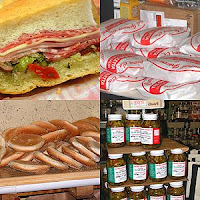 But today's French Fried Cajun' Food Recipe is a Muffuletta Sandwich.  This is actually made with Sicilian bread but is popular in New Orleans.


It is everything that New Orleans food is about - fusion.  This sandwich meshes Sicilian influenced Italian bread and meats with a Mediterranean tappas-like olive spread in the form of new world packaging - the sandwich!


After enjoying this I would suggest you walk you ova to dat Cafe du Monde and have ya-sef some Beignets and some o' dat Chicory-style coffee in a fancy French boule!  Enjoy!

*  In a medium bowl, combine celery, giardiniera, parsley, olives, olive oil, black pepper, and garlic. Set aside.
*  Remove a 1" layer piece from both halves of bread to make room for filling.  On bottom half of bread spread half of olive mixture.  Place ham, cheese, and salami on top of olive mixture.  Spread remaining olive spread over salami.  Place other half of bread on top and press halves together.
*  Wrap and refrigerate for at least 2 hours
Posted by Ryan Beaumont at 7:48 AM