It Doesn't Make a Difference if We Make it or Not

I'm not a big fan of Bon Jovi but Sandee said she liked them so consider this a tip of the hat to her.

So according to the Ryan Beaumont Ashley Madison play book you go about 3/4 AM notes, transition to e-mail for a few days, dial in a phone call, and then segue to a first meeting.  All that should take about 2 weeks at most right, maybe 3?  Well at least that was the way it had happened with Sandra and Keeley.  I guess now that I think about it there were some bumps in the road with Alesha along the way.  In fact, during this time I went back to some of those old Alesha notes to reinforce my resolve so to speak.

Why am I saying all this when my last Sandee post seemed so positive.

Well, it's because things continued to be so very positive but after about 3 weeks of AM notes and then e-mail I still hadn't nailed down a commitment to meet.  Was Sandee one of these "famed" e-mail queens?  She made a cute joke after I suggested we meet for coffee but had avoided any further attempt to meet.  In fact she said her days were very busy and hard to predict.  Dare I attempt a weekend meeting?

Even if she was an e-mail queen I was having fun so I continued to play along.  She was telling me about her dream to open a bakery "Blondie's Brownies," we were sharing our favorite Will Ferrell movies, and she always seemed to get me and I was getting her.

But I had a worry now!  You know as a guy (just like a pitcher or quarterback) you only have so many pitches or plays.  After awhile you're just the boring guy your wife is married to.  So there is a bit of urgency to get to a meeting and get someone interested in you from a physical perspective.  I am certainly no different.  Sure my life has been fairly interesting to me but when I look back I really only have about 2 weeks of material to sustain me before I turn boring like everyone else.   :)

It is at these times you tend to press and when you press you are most likely to screw up and when you screw up you don't get laid.  Yes, this was a new challenge.  But as I said Sandee was really cool and I wanted to press forward.

As an aside this time of year (mid to late August) is the busiest time of year for me work wise not to mention this blogging stuff that I was now addicted to!  So through this I was not spending any time on AM.  Sandee was option #1 at this point and there was not an option #2.  And the longer I held off and the more I got vested in Sandee the harder it was to give up. 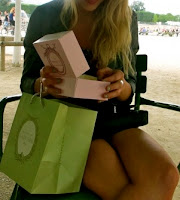 But really it was not too hard to give up as I said she was really interesting, funny, quirky, charming and gorgeous.  She sent me a picture of herself on a recent day trip into DC.  She was sitting on a park bench with a wistful smile, flowing long blond hair, freaking gorgeously shaped legs, and in a very sexy green suit.  Seemed odd to be in a suit for a weekend visit to DC.  I also noticed that what she was looking at was a bag labeled Ladoree.

Spoiler alert here - well not really a spoiler alert just a confession.  I know I play the idiot at times but if there is one thing Ryan knows is food.  Ladoree is a famous brand of French macaroons.  I was not aware of any store that sold Ladoree maroons around here.  I then googled and it looked like you could get them in NYC but probably not DC.  Hmmm....and you know what, that background doesn't look like the DC mall to me.

Am I being duped?  Surely not, I'm a pro right?

But as I said Sandee was cool; I couldn't stop now.  And oh how did I imagine the sensation I would feel moving my tongue up those lithe legs!  :)
Posted by Ryan Beaumont at 7:18 AM

Those email queens are pesky, Ryan.

You really do the phone call? I try to avoid that, largely because of the nerves and a slight fear of discovery.

I haven't even gotten an email well worth a reply, just passing the key around, since I've re-opened my account. However; there was that one asking if I had "bg titts". In Atlanta, you'd think there would be one with charisma. Enough to see if I was an "email queen".

oh you're a teaser...just when you were getting to the good part. I see your lessons from Riff had stood you in good stead!

Hoping he will zip over here and wave and let us know what is up...

until then, i'll just have to hang around and see what comes next here....

But ya gotta love a Bon Jovi girl, right? Right? Aaaghh..damned cliffhangers...I am throwing you and Riff off da bridge, yo. Hope the old dog is okay...

As I am a Member on AM. I emailed him as soon as I noticed his blog went poof.

He is alive, took a few days for a reply, but he did reply. "I had to pull the blog because some bad stuff happened. I can't really go into detail. Sorry for the mystery".

I'll let y'all know if I hear anything else...