It's official!  DC is the cheating capitol of the US!

And I don't mean screwing you out of your tax dollars or your social security or your guns or your condoms or whatever you are worried about.  No this is way bigger, apparently there are more cheaters per capita in the Greater DC area than any other large Metro Area in the US.  From Annandale to Annapolis; from Ballston to Bowie and everywhere in between we beat 'em all!  Now there is something to be proud of!

I guess that makes sense.  According to my records I've gotten laid by 3 different women over the past year and a half (well maybe 4 if you keep the faith).  So if I'm reading the article correctly even a blind pig could get laid in DC.  Which of course is me to a "T".

Of course I can attest to DC being a robust market on both ends as I did do a Riff style "Claire" test long ago. 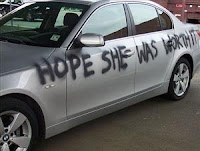 NEWSER) – Ashley Madison—the website bearing the tagline "Life is Short. Have an Affair"—has released its ranking of the top 10 US cities for cheaters. It drew its conclusions from its own subscriber base, looking at which cities had the most registered users and, based on its population, the highest per capita membership. The, er, winner? Washington, DC, is king when it comes to would-be adulterers, with some 37,943 registered users and the highest per capita stats—and 30 new subscribers per day, reports the Post.
Why DC? CEO Noel Biderman theorizes, "Simply put, the more successful you are, the more prone to cheating you are, and Washington is full of successful people looking for something outside their marriage." Rounding out the top 10 (w/notes by Ryan):

Posted by Ryan Beaumont at 6:05 AM

Email ThisBlogThis!Share to TwitterShare to FacebookShare to Pinterest
Labels: AM Advice

Uhhh. Yeah. DC Metro area the cheating capital of the country? This doesn't surprise me a bit. ;-)

As a true Bostonian 20-something female (with a vast knowledge in the art of extramarital mischief) I believe the more accurate and hip notion when procuring a Beantown affair would be "Hey, let's down shots of whiskey at the Warren Tavern then fuck in Harvard Yard while trying to avoid campus police." Nothing says Boston adventure like boozing in one of our oldest bars followed by a naked field trip to Cambridge!

Oh Boston you're my home...

Oh, you! You make me laugh! Boston and chowdah and baseball and screwing? Sounds wicked awesome to me! Sassy is taken, so of course the men here have to resort to a web site!

Now I need to find about Canadian cities. Although I'd be surprised to find such a survey, lol.

You. Are. Funny. Too funny!

Umm... Is subscribing to comments via email no longer an option?

@ Sassy - We just need to get you to take a peak at AM. Of course you are the AM consultant.

@ France - My understanding is that their is a very ROBUST Canadian market probably even bigger per capita than the states!

@ Tempting - I see what you mean; I was not aware of that.